For more information, see the Regulations for Responsible Target Shooting Infographic and answers to common questions below.

The Fish and Wildlife Commission adopted the rule revision Oct. 23, 2020. The rule became effective Jan. 18, 2021. The following section addresses common and anticipated questions about the rule update and the context for this rulemaking process. 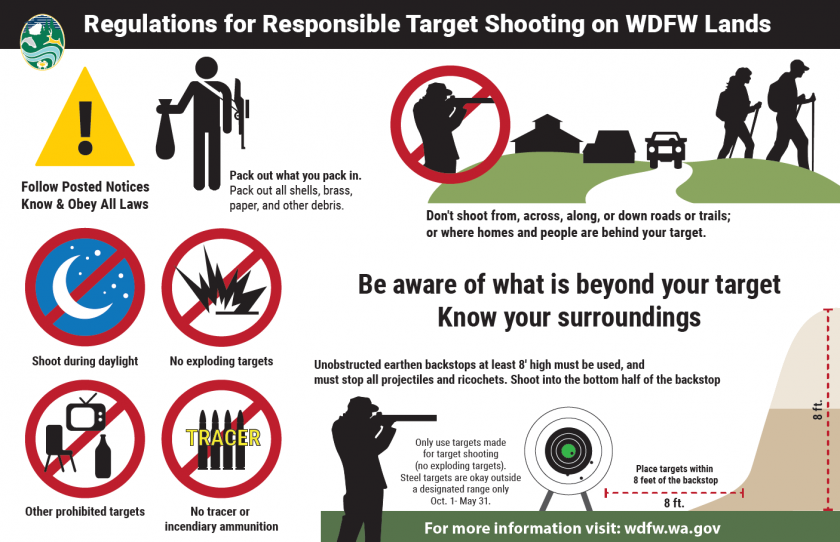 What is considered target shooting?

What led to this rule update?

An increase in target shooting on WDFW-managed lands in recent years as well as an increase in visitors has created several challenges, including public safety concerns and impacts to private property, littering, and wildfires. In addition, discrepancies with rules on adjacent state-managed lands (e.g. DNR lands) has led to confusion among shooters about the rules applicable to specific sites. The updated rule will help address these challenges.

What are WDFW’s goals for the updated rule?

The department’s goals are to 1) Continue providing target shooting opportunities on WDFW-managed lands; 2) Protect public safety and private property; 3) Reduce the risk of wildfires and other damage to habitat; and 4) Reduce confusion due to discrepancies with target shooting rules on adjacent lands.

How does the updated rule compare to target shooting rules on other state lands?

The updated WDFW rule is based on the current rules governing recreational target shooting on Department of Natural Resources (DNR) lands defined in WAC 332-52-145. However, the updated WDFW rule goes a step further by defining the required backstop as “an unobstructed earthen mound or bank at least 8 feet in height which must stop the progress of and contain all projectiles, ricochets, and fragments in a safe manner.” Additionally, targets must be placed in front of and within 8 feet of the backstop, and persons must be shooting into the lower half of the backstop.

Does this rule affect hunting or hunting rules?

No. The rule update does not affect hunting, hunting rules, or hunting dog training.

When did the updated rule go into effect?

How did the public provide input on the rule update?

The public had opportunities to comment on the rule update via the formal processes required by state law, by responding to a statewide survey, and on the WDFW website.

Where can I shoot on WDFW lands? How does this change with the rule update?

Unless closed by department-posted signage or notice, WDFW-managed lands are open to target shooting at designated recreational target shooting areas and in compliance with posted regulations, as well as in other areas containing an earthen backstop at least 8 feet high and meeting other listed criteria defined by the rule.

For more information, see the Target Shooting in Washington Brochure.

Targets must be placed in front of and within 8 feet of the backstop, and the person must be shooting at the lower half of the backstop. A backstop is not required while using archery equipment, crossbows, airbows, shotguns discharging shot smaller than size BB, or air rifles firing projectiles at a rate of 800 feet per second or less.

Does WDFW have plans to build new or enhance existing shooting areas?

WDFW intends to develop or make minor improvements to a few areas currently being used for recreational target shooting to provide a higher quality user experience and address safety or habitat issues by directing activity to more suitable locations. Additional areas may be developed or improved in the future, subject to funding availability.

The department recently completed updates to the Sheep Company Road shooting range at the Wenas Wildlife Area. Upgrades to the site include a new gravel road and parking lot, ADA-compliant packed gravel paths, new signs marking designated ranges of 25 yards for pistols and 100 yards for rifles, ranges for shotguns and other long-range shooting, side berms, and backstops. There are also ADA-accessible tables for the 25-yard range and better stormwater drainage for improved protection of wildlife habitat. Read the news release for more details.

What are the penalties for violating the rule?

Most violations of the updated rule would constitute an infraction. However, some violations may constitute a misdemeanor, gross misdemeanor, or felony depending on the seriousness of the violation and whether property or persons were endangered or injured by a person’s reckless discharge of a firearm, bow, or other implement.

What is WDFW's approach to enforcing the rule?

WDFW understands that a change in target shooting rules may not be immediately apparent to many past visitors of agency-managed lands, especially right after the rule becomes effective Jan. 18, 2021. It is up to the discretion of the individual officer as to how an encountered violation is handled. However, our priority is education, especially where the violation did not present a substantial risk to people or property or was not done with malicious or reckless intent.

Specific Elements of the Rule

What is the difference between a firearm and a gun that uses air or compressed gas?

A firearm is defined in statute (RCW 9.41.010) “as a weapon or device from which a projectile or projectiles may be fired by an explosive such as gunpowder.” The term firearm does not include a flare gun or other pyrotechnic visual distress signaling device, or a powder-actuated tool or other device designed solely to be used for construction purposes. Under this definition, guns that use compressed air or gas are not considered firearms but are included in the updated rule because many are capable of high velocities and/or shooting large caliber projectiles.

What are the new backstop requirements?

The backstop must stop the progress of and contain all projectiles, fragments, and ricochets in a safe manner. Individuals engaged in target shooting must use a backstop at least 8 feet in height that meets this requirement.

The backstop should be comprised of soft or loose material without larger rocks or solid rock and must have a slope that prevents ricochets in any direction including back towards the shooter, to the sides, or over the top of the backstop (see the diagram below).

Targets must be placed in front of and within 8 feet of the backstop, and the person must shoot at the lower half of the backstop. This requirement increases the probability that the backstop will stop all projectiles and fragments, however individuals are ultimately responsible for ensuring the health and safety of nearby persons and the surrounding environment.

What is the rationale of requiring a backstop to be used for air guns shooting projectiles at 800 feet per second (fps) or higher?

Like shotguns (commonly firing with velocities of 1000-1500 feet per second), air guns are capable of inflicting serious injury or death, particularly for common air gun calibers (.177 - .25) firing over 800 feet per second. A backstop is the most practical and effective tool to reduce their associated risk. Air guns firing at low velocity (less than 800 feet per second) pose a relatively small risk, thus a backstop is not necessary when safe shooting practices are employed.

Air guns were separated from the caliber requirement for shotguns to allow for greater flexibility in the use of “entry-level” air guns. Though not always required, use of a backstop improves safety and should be used whenever possible while recreational target shooting.

The rule update does not limit or preclude long range target shooting, if the requirements in the rule are met. Individuals must use an unobstructed earthen backstop as defined in the rule and must be reasonably certain the entire area between them and the target, as well as the area beyond the target, is free of risk to people, animals, or property. Targets placed at distance, as well as target debris, must be collected after shooting is completed.

Why are there timing restrictions on the use of steel targets?

Are all clay targets biodegradable? How can the public know which are legal?

Why are tracer bullets not allowed?

Fires have occurred on WDFW lands from the use of these projectiles. Tracer bullets contain a pyrotechnic charge which burns when discharged, thus presenting a high fire risk.

How and when will WDFW address environmental issues associated with target shooting?

Will my family still be able to “plink” with BB guns without using a backstop?

Compressed gas or air guns can be use without a backstop if they are not capable of shooting velocities over 800 feet per second. However, all shooters are expected to exercise safe basic firearm handling practices and be responsible in the handling and discharge of these devices.

Can aluminum cans be used as targets?

Aluminum cans, plastic bottles, etc. are not allowed to be used as targets; the rule update requires targets be commercially manufactured for the specific purpose of target shooting, or be similar targets privately manufactured that are consistent with the rule.