Impacts from the September 2020 wildfires are causing some trail, road, and campground closures on public lands. If you are planning to head out for an annual hunting trip, a day of wildlife viewing, or another outdoor adventure, first check to ensure that your destination is open. Up-to-date information on wildfires in Washington is available on the InciWeb site

Fire intensity determines the potential losses and benefits to habitat. Some of the September 2020 wildfires will have a burn intensity map available soon. Early estimates indicate fire intensity was low to moderate. As of early October, we are already seeing some green-up of native vegetation in many areas recently affected by wildfires.

Be cautious of hazards

People heading to areas recently impacted by wildfires should take extra precautions, as these lands could pose hazards such as unseen holes in the ground where roots have burned up or burnt stumps and trees that could fall.

How to help wildlife impacted by wildfires

Check out our blog, Four ways to help wildlife after wildfires.

What WDFW lands were impacted?

How did wildfires affect deer populations? 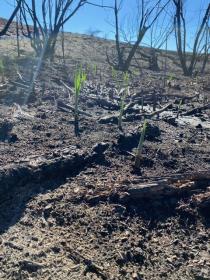 We are currently assessing our deer populations, but we will have to wait for what kind of winter we get to really understand the impacts. Deer are migratory and are able to move to wintering habitat in other areas that were not burned. While we want robust deer populations in Washington, native vegetation can rebound faster with fewer herbivores on the landscape. Deer over browsing the re-sprouting shrubs and trees can kill plants and allow for weeds or invasive species to take their place. The quality of deer forage is often improved within a few years, and deer may be attracted back to the area.

Are you planning to start feeding deer?

Not at this time. Artificially inflating populations can have a long-term effect on habitat recovery and overall herd health. Concentrating deer in one place can also increase the spread of disease.

What do you plan to do about damage from deer?

We know that many privately-owned lands have been hard hit by these wildfires, and we are working on creative solutions to minimize conflicts between landowners and deer or elk. We are still assessing the impacts of these fires to wildlife populations, their habitat, and elk and deer fencing. If you have specific questions about damage, please contact your regional office.

Why aren’t you closing hunting seasons in wildfire-impacted areas?

We believe there is value in reducing deer populations to help habitat recovery. As always, hunters should plan ahead and get permission before hunting on private lands. Hunters may need to change their hunting plans as some private landowners that historically enroll in the department’s access programs may not participate this year.

How were sage-grouse and pygmy rabbits impacted?

With dozens of species classified as state-endangered, threatened, or sensitive, we are tasked with guiding recovery efforts for many at-risk animal populations. We are especially concerned about two endangered species in Douglas County – the Greater sage-grouse and pygmy rabbit.

How have sage-grouse populations been impacted?

Currently, 50% of sage grouse leks in the heart of our population in Douglas County has burned, and we have likely lost our struggling reintroduced population in Lincoln County. Our initial assessment of the Pearl Hill fire area is that it may result in a population decline of 30-70%, bringing the statewide population to dangerously low levels.

Some, or many, grouse may have escaped the immediate fire, and past events have shown an increase at leks surrounding a burn. However, some birds may have died, and those that move are more vulnerable to predators. We won’t know the full population impact until spring surveys, and the ultimate impact may not be known until the displaced birds attempt to breed elsewhere.

How have pygmy rabbit populations been impacted?

Historically, we have three pygmy rabbit recovery areas. In one of the areas, Burton Draw, we lost everything. While our recovery strategy has been spreading release efforts to multiple areas to guard against total loss in the face of wildfire catastrophe, the impact to recovery is significant.  Our initial estimate is that we lost half of our known rabbit population.

How can I help wildlife impacted by wildfires?

Check out our blog, Four ways to help wildlife after wildfires.

Was there damage to fencing?

Many WDFW fences were partially or fully lost in this year’s wildfires. We are working on determining the extent of the damages and creating a plan to replace fencing as soon as possible. In the meantime, we ask hunters to be careful about where they are hunting. Without fences to post no trespassing signs on, hunters need to be extra vigilant that they are not trespassing on private property.

How soon will you repair elk fences?

Our staff are working on a plan to repair elk fencing. If you have elk damage on your property, please contact your regional office.

How is grazing impacted?

Ranching has an essential role in the makeup of many communities throughout Washington, providing benefits for local livestock producers and residents all over the state. The department  utilizes grazing as a management tool where and when consistent with our mission and land management goals and when it can be done such that ecological integrity persists on the land.

Will you consider emergency grazing permits on WDFW-managed lands?

We are working with livestock producers individually to help with emergency grazing permits and have been able to offer several such opportunities.  Please contact your regional office for more information.