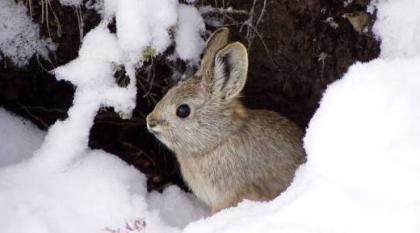 A pygmy rabbit peaks out from the snow and sagebrush. (R. Dixon and H. Ulmschneider - U.S. Fish and Wildlife Service) 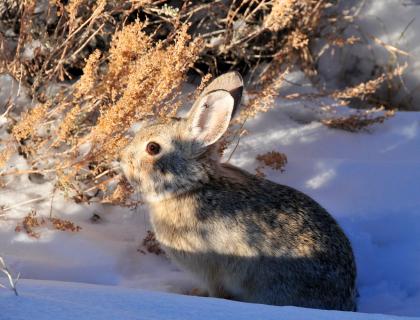 The population of Columbia Basin pygmy rabbit in Washington is extremely small and is designated as a Distinct Population Segment for protection under the U.S. Endangered Species Act. Conservation threats to the Columbian Basin pygmy rabbit include loss and degradation of shrubsteppe primarily due to conversion and fragmentation of this habitat to cropland and development.

NOTE: “Rabbit hemorrhagic disease virus serotype 2” (RHDV2) is a fatal viral disease to rabbits with an estimated 90% mortality rate and no cure. Fortunately, RDHV2 has not yet infected the pygmy rabbit population in Washington state. Though WDFW has been diligently administering vaccines, it is imperative that volunteers working with pygmy rabbits are aware of exposure risk and help prevent the spread of RDHV2. See this fact sheet to learn more about this disease.

The pygmy rabbit is the smallest rabbit species in North America. It can grow up to almost 12 inches long and weigh up to 16 ounces. Adult pygmy rabbit females are slightly larger than adult males. This rabbit has a slate gray coloration that can turn brown during the summer months. Its ears are short, and its tail is nearly invisible and does NOT have the white color indicative of other rabbits, such as the larger Nuttall's cottontail (also known as mountain cottontail).

Pygmy rabbits are sagebrush obligates, depending on this habitat for survival. Dense stands of sagebrush provide pygmy rabbits with year-round food and shelter. Native, perennial grasses and forbs provide an important food source beginning in spring and especially in summer and fall and deep, friable soils allow them to construct burrows.

The pygmy rabbit is one of only two North American rabbits known to dig its own burrows. Burrows are used for shelter, thermoregulation (to regulate body temperature), and safety from predators. Burrow systems are generally found on mounds or gentle slopes.

Big sagebrush is the primary food source, comprising 90 percent of the winter diet, but grasses and forbs are also eaten in spring and summer. Activity occurs throughout the year, and pygmy rabbits may be active any time of day or night (although most activity occurs during the twilight hours).

Breeding extends from February to June. Specialized natal burrows, where females give birth to young, are excavated separate from residential burrows. Females have two to four litters per year with up to six kits per litter.

Pygmy rabbits inhabit sagebrush-dominated areas of the Great Basin in portions of Oregon, California, Nevada, Utah, Idaho, Montana, and Wyoming. The Washington population has been isolated from the remainder of the species' range for at least 10,000 years, and possibly as long as 40,000 to 115,000 years.

The Columbia Basin pygmy rabbit population is geographically and genetically distinct from the remainder of the taxon and this population is significant due to the unique ecological setting (i.e., geologic, climate, soil, and vegetation community) in which it occurs.

As of 2021, pygmy rabbits are known to occur in only two small areas in the Columbia Basin---both the result of reintroduction efforts. One population occurs in the Sagebrush Flat area of southern Douglas County and Beezley Hills of northern Grant County.  A third population was in the process of being established near Jameson Lake in central Douglas County but was lost due to the Pearl Hill Fire in 2020. See the Conservation section for WDFW's pygmy rabbit recovery effort.

For maps of range-wide conservation status and other species' information, check out the International Union for Conservation of Nature - Red List and NatureServe Explorer.

Pygmy rabbits inhabit shrubsteppe ecosystems and feed primarily on sagebrush throughout the year. This rabbit is predicted to undergo a major decline in geographic range as a result of climate change, which is expected to bring warmer, drier conditions, including drought, to Washington’s Columbia Basin where the species occurs. These conditions will lead to larger, more frequent, and hotter wildfires, thereby reducing the presence of sagebrush and encouraging the growth of cheatgrass and other invasive plants. Fires also contribute to fragmentation of existing habitat for the species. Wildfires are currently the most critical threat to pygmy rabbits.  The fires not only kill the rabbits outright, but the habitat following a fire is completely uninhabitable to pygmy rabbits.  Needing dense and tall sagebrush stands (3 to 5 feet tall), it could take 15 to 20 years for burned areas to become pygmy rabbit habitat again.

See the Climate vulnerability section for information about the threats posed by climate change to this species. The species faces grave threats from increasing occurrences of wildfire.

Rabbit hemorrhagic disease has emerged as a concern as well.

The Columbia Basin pygmy rabbit population is genetically distinct, considered to have been isolated for 10,000 years or longer from the rest of the pygmy rabbit population. Large-scale loss and fragmentation of shrubsteppe habitat were likely the primary factors contributing to decline, but once the population dropped below a certain threshold, other factors such as environmental events (extreme weather and fire), predation, disease, and inbreeding likely became threats.

A major recovery effort is underway for this species. In 2001, with as few as 16 pygmy rabbits known to exist in Washington, the WDFW and the USFWS initiated a captive breeding program with the intent of reintroducing rabbits to the wild, but none of the pygmy rabbits from the first release in 2007 survived beyond the first year. Since 2011, over 2,000 pygmy rabbits have been released into the wild on Sagebrush Flat Wildlife Area and Chester Butte Wildlife Area in Douglas County and on The Nature Conservancy Preserve in the Beezley Hills in Grant County as a result of collaborative recovery efforts between WDFW, USFWS, the Oregon Zoo, Washington State University, other state wildlife agencies, Northwest Trek, The Nature Conservancy in Washington, and Conservation Northwest.

Release efforts on Sagebrush Flat occurred from 2011 to 2016 and have established a wild population that was estimated to be nearly 300 adults in 2018 but has declined to under 100 since then. Early release efforts (2015 to 2017) struggled in Beezley Hills due to disease and wildfire but have done well since 2018 with modifications to release efforts and now a wild population is starting to thrive in 2021. Release efforts on Chester Butte occurred from 2018 to 2020 and were beginning to thrive, both expanding across the landscape and in rabbit numbers, but all were lost due to the catastrophic Pearl Hill fire.

The majority of the wild pygmy rabbit populations occur on private lands owned by farmers enrolled in the USDA’s Conservation Reserve Program. Biologists continue to closely monitor released pygmy rabbits to collect data on breeding, habitat use, survival, mortalities, and other factors to modify reintroduction techniques and manage the rabbit population.