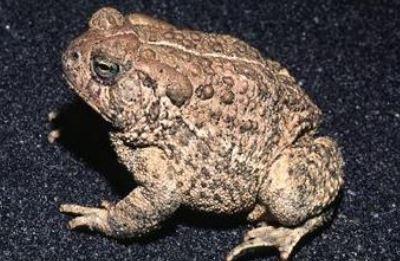 This toad is of conservation concern in Washington based on its small number of populations, a limited distribution restricted to shrubsteppe habitat that has been heavily altered for agriculture and urban development, and a lack of information about the species.

This terrestrial toad is medium to large sized, averaging about 2 to 5 inches in length from snout to its vent (excretory opening). This stout toad has a broad waist, short legs, a round head, and a short snout. Prominent L-shaped cranial crests are present between and behind the eyes. The skin is warty and large, long external skin glands (parotoid) are on the neck. Coloration is gray, light brown, or olive with dark blotches and spots and a dark speckled light underside. The dorsal (topside) stripe is white. Males have a dark throat.

These traits are not present in newly metamorphosed toads and may not be prominent in juvenile Woodhouse’s toads.

Eggs are laid in strings often mixed with eggs from other toads. Individual eggs are small, black above and white below.

The difference between the eggs of Washington's two toad species is subtle: Woodhouse's toads have only one layer of gel, western toads have two.

The tadpole (aquatic larval stage) is small (less than one inch total length), has a depressed body with dorsal eyes, a spiracle on the left side of the body, a medial vent and a low fin that originates at the dorsal tail-body junction. The tip of the dorsal fin is rounded. The body and dorsal side of the tail musculature are darkly pigmented. Light and golden pigment appears first near the underside of the tail base and increases on the body as the tadpole grows. The tail fin and underside of the tail musculature lack pigment but may have some dark flecking.

Unlike Woodhouse's Toad tadpoles, western toad tadpoles appear uniformly black (fine gold pigmentation on the belly is visible in bright light), the dorsal fin is moderately pigmented, and the ventral fin has little or no pigmentation.

The advertisement call of the Woodhouse toad is a loud, nasal "w-a-a-a-ah" lasting about 1-1 1/2 seconds.

Habitats include riparian areas, shrubsteppe, and grassland. Woodhouse's toads are found in shrubsteppe habitat near the Columbia and Snake rivers. Transformed toads are terrestrial, and soil types suitable for burrowing are important because the toads spend most of the day burrowed below the surface.

These toads are opportunistic predators who primarily eat invertebrates such as insects.

Activity starts in late April to early May and continues into Oct. Adult activity usually occurs during the twilight hours into the night, though smaller toads and newly metamorphosed "toadlets" can occasionally be found during the day. Male chorusing and breeding in Franklin, Benton, and Grant counties occurs from May into July depending on conditions at each breeding site.

Breeding takes place in a variety of still-water habitats, including shallow temporarily flooded sites, ponds, and sloughs. The toads will also lay eggs in stagnant areas of small, slow-flowing streams.

Eggs are laid in strings often mixed with eggs from other toads. Individual eggs are small, and black above and white below. Egg development to hatching is rapid (less than 10 days), and tadpole development is completed in approximately two months, while metamorphosis occurs in summer or fall of the first year.

In Washington, Woodhouse's toads occur in a small area of the Columbia Plateau Ecoregion along the Snake River, and along the Columbia River between the Priest Rapids Dam and John Day Dam. Occurrences have also been documented in the Eltopia and Wahluke Branch irrigation canal system in Franklin County on the Hanford site and Juniper Dunes.

This map from the Washington Herp Atlas illustrates the distribution of Woodhouse's toad in Washington based on records in the WDFW database as of 2016. If you see this species in areas that are not indicated on the map or have more recent observations (less than 10 years), please share your observation using the WDFW wildlife reporting form.

For range-wide distribution and conservation status of this species, check out NatureServe Explorer and the International Union for Conservation of Nature Red List.

Juvenile toads avoid high temperatures and prefer lower temperatures when food is limited or under dry conditions. Tadpoles may be sensitive to low pH levels. Woodhouse's toad may be better adapted to warmer, drier conditions due to their dry, leathery skin and ability to burrow to reduce exposure to high temperatures although they need suitable (i.e., friable) soils to burrow. Sensitivity of Woodhouse's toad is greater due to their habitat specialization (e.g., shrublands) and dependence on wetlands/ponds for breeding as well as low ability to disperse. Declines in shrub-steppe and wetland habitats due to climate change (i.e., changes in precipitation, invasive weeds, altered fire regimes) negatively affects this species.

Dunham, J. B., A. E. Rosenberger, C. H. Luce, and B. E. Rieman. 2007. Influences of wildfire and channel reorganization on spatial and temporal variation in stream temperature and the distribution of fish and amphibians. Ecosystems 10(2):335-346