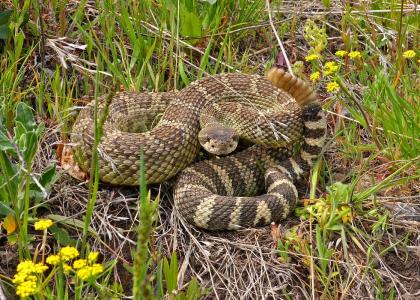 The western rattlesnake is the only snake in Washington with a "rattle" on the tip of its tail.
Category: Reptiles
Family: Viperidae
Ecosystems: Shrubsteppe
If you see this species, please share your observation using the WDFW wildlife reporting form. Providing detailed information such as a photo and exact coordinates will improve the confidence and value of this observation to WDFW species conservation and management.

This snake is common and widespread in eastern Washington. However, numbers in many areas have declined because of habitat loss, excessive hunting at den sites, and destruction of den sites.

According to NatureServe, the state conservation status of the western rattlesnake population is considered “secure” in Washington.

Caution: This is a venomous and potentially dangerous snake. Rattlesnakes rarely strike unless harassed, handled or stepped on, but any encounter within the striking range could result in a bite.

The western rattlesnake is the only snake in Washington with a rattle and facial pits. This is a heavy-bodied snake with large dark spots, a wide triangular head, a distinct eye stripe, and a rattle at the tip of the tail. The largest rattlesnake measured in the Northwest was 59 inches. Most adult snakes encountered in Washington are much smaller (around 2 feet). No obvious external features distinguish males from females.

The cryptic coloration of these snakes varies depending on habitat and substrate color. Typically, the snake is some shade of brown or olive. The spots are dark brown and bordered by black and then white. Additional spotting occurs on the sides of the body. The dorsal (topside) spots fuse with the lateral spots on the tail to form bands. Ventral scales are white with dark blotches. The dorsal scales are strongly keeled and overlapping with 25 rows (range 23 to 29) at mid-body.

The pupils are vertical and the scale above the eye is enlarged. Holes, called “pits,” for reception of infrared heat are located on both sides of the face near the nostrils.

The gophersnake is often misidentified as a rattlesnake because the two species have similar markings and defensive behavior. Gophersnakes differ in their physical appearance by lacking a rattle and facial pits. They also have smaller, square, dorsal spots; oval pupils; a narrow eye stripe that extends both to the posterior edge of the jaw and below the eye; and scales that are less keeled.

Nightsnakes resemble juvenile rattlesnakes, but they differ in lacking a rattle and facial pits. They also have smaller, more numerous dorsal spots that are not outlined in black and white, a pearly white belly with no other markings and smooth scales.

In Washington, western rattlesnakes primarily occur in shrubsteppe habitats but are also found in Oregon white oak, ponderosa pine and other open forest types. Talus and basalt rock outcroppings are used for overwintering.

Rattlesnakes are active during the day when temperatures are moderate but switch to nocturnal activity during the hottest months of the year. When not active, they shelter under shrubs and rocks.

In most of the Columbia Basin, western rattlesnakes emerge from their overwintering sites (hibernacula or dens) in April. Activity is limited to the vicinity of the overwintering site for 2 to 3 weeks and then they disperse to their summer foraging areas.

Reproduction takes place in the spring near the den site. Young start to appear in late August.

Adults return to the overwintering sites starting in late September, although activity may continue until late October depending on location and temperatures.

Western rattlesnakes occur east of the Cascade Mountains in the East Cascades, Columbia Basin, Okanogan, and Blue Mountain ecoregions. The furthest west they have been documented is in the Columbia Gorge approximately 1 mile west of Dog Mountain in Skamania County.

This map from the Washington Herp Atlas illustrates the distribution of western rattlesnake in Washington based on records in the WDFW database as of 2016. If you see this species in areas that are not indicated on the map or have more recent observations (less than 10 years), please share your observation using the WDFW wildlife reporting form.

The state conservation status of the western rattlesnake is “secure” based on the assumption that it is common according to the most current records.

The main conservation concern for this species is excessive hunting and wanton killing of snakes emerging from hibernation, as well as destruction of communal den sites. Both can result in local population declines and even local extirpation.

Ashton, K. G., and A. de Queiroz. 2001. Molecular systematics of the western rattlesnake, CROTALUS VIRIDIS (Viperidae), with comments on the utility of the D-loop in phylogenetic studies of snakes. Molecular Phylogenetics and Evolution 21:176-189.