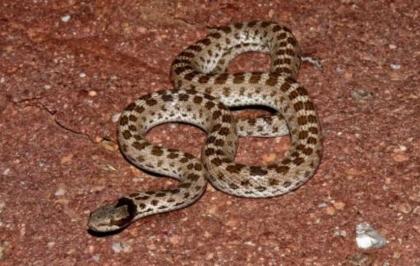 This small snake is found in the Columbia Basin in Washington. It is of conservation concern in the state based on its rarity and because it primarily occurs in shrubsteppe habitat, which is declining.

Most shrubsteppe habitat in Washington has been converted to other uses or degraded by frequent fires and invasive weeds. Loss of this habitat is predicted to continue.

Nightsnakes resemble western rattlesnakes, but do not have a rattle or a “button” (single rattle) on the tail like a rattlesnake. The nighsnake is a small (less than 18 inches in total length), spotted snake with a small head and mouth. They have dark brown blotches in the neck region, smooth scales, and vertical pupils. This species has a dark eye stripe from the nostril to the jaw. The upper labial scales are white speckled with brown. The ventral (underside) scales have a “pearly” white sheen and no markings.

The nightsnake’s fangs are in the back of the mouth (“rear-fanged”) and the venom is “chewed” into the wound of their prey. This is unlike a rattlesnake that has long fangs at the front of the mouth that inject venom into prey.

In addition to a resemblance to western rattlesnake, other Washington species that are similar in appearance include the gopher snake and juvenile racer. Only the northern desert nightsnake has both smooth scales and vertical pupils

For more details about this desert nightsnake, see the Washington Herp Atlas.

Most nightsnake occurrences in Washington are from arid areas that support shrubsteppe vegetation, but occurrences in the Leavenworth area are in ponderosa pine forests. Individuals are usually found in rocky areas, but have also been found in sagebrush flats that are not rocky. During the day, individuals can be found sheltering under surface objects, generally rocks. However, during prolonged periods of hot weather, they may move deep into talus, rock fissures or rodent burrows.

As their common name suggests, they are primarily active at night (i.e., nocturnal).

In Washington, these snakes are active from April to October. Mating takes place in the spring. Three to nine eggs are laid in June or July each year.

In Washington, northern desert nightsnakes have been documented in the Columbia Plateau, Eastern Cascades, and Okanogan Ecoregions. Distribution may be limited by the occurrence of certain lizard prey species. From 2003 to 2004, 66 new observations were made from seven Washington counties by a student as part of his graduate studies at Central Washington University. This provided the evidence that the species was more common than was previously known.

This map from the Washington Herp Atlas illustrates the distribution of northern desert nightsnake in Washington based on records in the WDFW database as of 2016. If you see this species in areas that are not indicated on the map or have more recent observations (less than 10 years), please share your observation using the WDFW wildlife reporting form.

Northern desert nightsnake, a small egg-laying largely nocturnal snake that tends to be associated with rocky habitats but has a highly relatively plastic diet though it may take reptiles more frequently, seems relatively robust to historical changes in climate. If any particular sensitivity to climate change exist, it may be linked to dietary specialization of local populations. Uncertainty exist with regard to the impact of climate change on overwintering and oviposition sites, but neither is anticipated to be create particularly great vulnerabilities for this species. Altered fire regimes and invasive weeds have an uncertain likelihood of affecting northern desert nightsnakes.