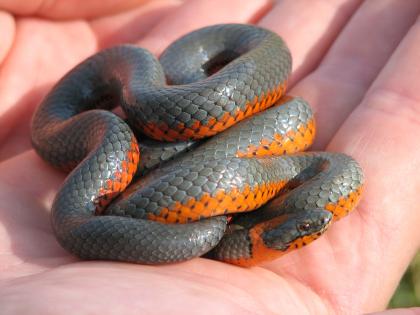 This snake is of conservation concern in Washington based on the small number of observations, patchy distribution, and lack of information.

Little is known about the current status of the ring-necked snake in the state. Some of this species distribution is in the Columbia Basin, which is a heavily altered region of the state heavily impacted by agriculture.

This is a small, dark (slate gray to greenish gray) harmless snake with shiny scales and an orange band or “ring” around the neck. The underside is bright orange. These snakes rarely exceed about 22 inches in the Northwest. The dorsal coloration is slate gray to greenish gray. The bright orange ventral scales have scattered black spots. The orange ventral coloration darkens to red under the tail. Scales are smooth with 15 rows of dorsal scales at mid-body. Pupils are round. No obvious external features distinguish males from females. Juveniles resemble adults.

For more details about this the ring-necked snake, see the Washington Herp Atlas.

Based on collection and observation records, ring-necked snakes occur in ponderosa pine-Oregon white oak, mixed forest, and shrubsteppe. Occurrences in shrubsteppe are often associated with riparian areas. Ring-necked snakes are secretive and rarely surface active during the day. They are usually found under woody debris, rocks or on roads at night.

They feed on earthworms, small salamanders and slugs as well as sometimes small lizards, small frogs and juvenile snakes.

Females deposit three to ten eggs per year in June or July. Eggs are deposited in moist locations like stabilized talus and rotting logs.

Similar to other snake species in Washington, ring-necked snakes are likely active from March through October varying somewhat from year to year and by location.

The main distribution of this species in Washington follows the east slope of the Cascade Mountains from the Ellensburg area south to the Columbia Gorge and west to Longview. They also occur along the eastern portion of the Snake River. Distribution is likely continuous between the Klickitat and Yakima Counties but there are no records in WDFW’s database to support this. Isolated records of individual snakes were collected in Whitman County in 1937 and 1938; Walla Walla County in 1975; and two locations in Cowlitz County (Kalama and the confluence of Mill Creek and the Columbia River) in 1959 and 1982, respectively.

Observations for this species are rarely submitted to the WDFW database and no studies have been conducted in Washington. Consequently, nothing is known about the status or abundance of this species.

This map from the Washington Herp Atlas illustrates the distribution of ring-necked snake in Washington based on records in the WDFW database as of 2016. If you see this species in areas that are not indicated on the map or have more recent observations (less than 10 years), please share your observation using the WDFW wildlife reporting form.

Overall, there is a lack of information regarding sensitivity of the ring-necked snake to climate change. Distribution in shrubsteppe is poorly understood largely because of lack of survey effort, however, it is suspected that Individuals that occurrence in shrubsteppe habitats are often associated with riparian areas, and may have higher sensitivity due to habitat drying or altered fire regimes that degrade or eliminate habitat because the current condition of riparian habitats across shrubsteppe landscapes are already generally quite spotty.

Conservation threats to the ring-necked snake include a lack of information on its status and distribution. Conservation actions needed to address this threat is to research, survey and monitor this species to understand its status, distribution, and habitat needs.

See the Climate Vulnerability section for information about the threat posed by climate change to this species.

St. John, A. 2002. Reptiles of the Northwest: California to Alaska, Rockies to the Coast. Lone Pine Publishing. 272 pp.