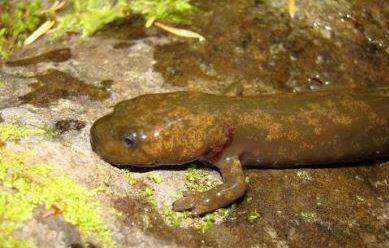 This salamander occurs in western Washington and Oregon, and is at risk. Main concerns for this species are land uses that contribute to stream sedimentation or elevated stream temperatures.

Larvae are stream-type with short gills and a low tail fin that ends on the body near the hind limbs. The tips of the digits are black and hard (cornified). Larvae are light brown with minimal dark mottling above. The ventral surface (underside) is white in small larvae (less 2 inches snout to vent length) and bluish gray in larger individuals. Granular clusters of tan to yellow pigmentation are present on surfaces of the dorsal (topside) and lateral (sides) of the salamander. The average size at maturity is 2.6 to 3 inches snout to vent length.

Of stream-type larvae, the torrent salamanders (Rhyacotriton species) can be easily distinguished by their orange ventral coloration and tiny gills that are barely visible when the salamander is out of water.

For larvae 2 inches snout to vent length or greater, the following traits can be used to determine species. The head of Cope’s giant salamander is similar in width at the base and snout and the head width is less than 1/5 the snout to vent length. Toes do not touch or overlap when legs are adpressed against the body. The tan to yellowish pigmentation on the dorsal surface of the body is clustered into spots and blotches. Whereas the Pacific giant salamander has tan to yellowish pigmentation present in indistinct streaks as if someone painted it on the surface with a dry brush.

The eggs are white (unpigmented), laid singly and attached to the nest wall by short pedicels.

Cope's giant salamanders are primarily associated with small to medium-sized mountain streams in moist coniferous forests. These salamanders require cold-water streams with rocky bottoms in moist forests. The spaces between and under the rocks are used by the salamanders for shelter and places to lay eggs. They almost always mature in the larval form and become gilled adults that remain in the streams.

They are often the dominant vertebrate within streams. During the day, they are typically concealed under rocks or woody debris, but they can occasionally be observed moving about in the stream.

Most Cope's giant salamanders become sexually mature in the larval stage. The average size at maturity is 2.6 to 3 inches snout to vent length. Similar to other giant salamander species, most activity is probably nocturnal, and much time is spent in subterranean microhabitats.

Breeding takes place in the spring, summer, and fall, with peak activity in the spring and fall. The female guards the eggs for 200 days or more until they hatch. The larval stage is permanent for most individuals with sexual maturity occurring in the larval form (paedomorphosis). Average size at maturity is 2.5 to 3 inches snout to vent length but may not take place until the larvae reach 4.5 inches snout to vent length.

Cope's giant salamander is found in western Washington and extreme northwestern Oregon. In Washington, these salamanders occur primarily west of the Cascade Crest in the Pacific Coast, southern Puget Trough, and West Cascades ecoregions. They are the only giant salamander documented north of the Chehalis River in the Olympic Peninsula.

This map from the Washington Herp Atlas illustrates the distribution of Cope's giant salamander in Washington based on records in the WDFW database as of 2016. If you see this species in areas that are not indicated on the map or have more recent observations (less than 10 years), please share your observation using the WDFW wildlife reporting form.

For maps of range-wide distribution and conservation status of this species, check out NatureServer Explorer and the International Union for Conservation of Nature Redlist.

Cope's giant salamanders appear sensitive to temperature and precipitation factors that cause microhabitat desiccation as well as high flow events that degrade aquatic habitat. Elevated temperatures (although one study has shown these salamanders may tolerate a wider temperature range), increased solar radiation, and moisture loss, as well as declines in stream flow that reduce aquatic habitats, will likely negatively affect this species. Additionally, the salamander's occurrence in rain-on-snow transient zones makes it particularly sensitive to rain-on-snow events that result in high flow events and increased sedimentation. Cope's is typically a neotenic form, that is thougth to rarely transform; however, observations made in the Willapa Hills suggest that massive transformation can occur with stream drying in drought years, so Cope's may be capable of responding to years with stream drying; how flexible that response is is highly uncertain.

Genetic research indicates this species is dispersal limited. Being confined to relatively small stretches of streams makes them vulnerable.