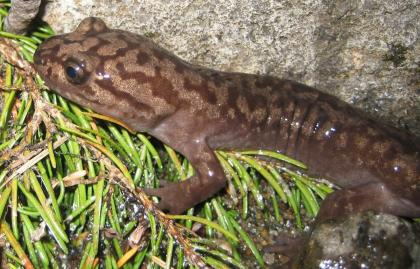 This salamander is common and occurs throughout western Washington. Main concerns for this species are land uses that contribute to stream sedimentation or elevated stream temperatures.

According to NatureServe, the state conservation status of the Pacific giant salamander population is considered “secure” in Washington.

The Pacific giant salamander is a large, stocky, marbled gold and brown salamander with a rounded snout, indistinct costal grooves, and a laterally compressed tail. The largest terrestrial salamander in North America; adults reach lengths of 6.7 inches snout-vent length and 13.4 inches total length. The marbling becomes less distinct as the salamander ages and may only be present on the head of very old individuals. The ventral surface (underside) is usually white to light gray (may also be dark in some individuals) without other markings or pattern. Twelve to thirteen costal grooves are present but indistinct.

The tips of the digits are black and hard (cornified). Small larvae (less than 2.2 inches snout to vent length) are light brown above and white below. Subtle tan to yellowish streaks of pigmentation is present on the dorsal and lateral surfaces in indistinct streaks. The tail is mottled with darker pigmentation and there is usually a dark blotch at the tip of the tail. Larger larvae (greater than 2.2 inches snout to vent length) are more mottled, have dark ventral surfaces and the mottling and spot on the tail are less conspicuous or may be absent.

Of the stream-type larvae, the torrent salamanders (Rhyacotriton species) can be easily distinguished by their orange ventral coloration and tiny gills that are barely visible when the salamander is out of water.

For larvae 2 inches snout to vent length or greater, the following traits can be used to determine species. The head of Cope’s giant salamander is similar in width at the base and snout and the head width is less than 1/5 the snout to vent length. Toes do not touch or overlap when legs are adpressed against the body. The tan to yellowish pigmentation on the dorsal surface of the body is clustered into spots and blotches. Whereas the Pacific giant salamander has tan to yellowish pigmentation present in indistinct streaks as if someone painted it on the surface with a dry brush.

The eggs are laid under rocks or logs and are guarded by the females. The eggs are white without pigmentation, laid singly and attached to the nest wall by short pedicels (anchoring structures).For more details, see the Washington Herp Atlas.

Check out this short video of a Pacific giant salamander located in the Crabtree Valley in Oregon from Oregon Wild.

Pacific giant salamanders are primarily associated with small to medium-sized mountain streams in moist coniferous forests. They may also enter larger flowing water bodies and still water habitats connected to the streams they inhabit. Breeding sites are limited to smaller flowing water bodies. Pacific giant salamanders are often the dominant vertebrate within streams. Most occurrences are found below 3,150 feet elevation but populations have been observed at higher elevations.

Metamorphosed forms spend most of their lives in the subterranean environment and are rarely seen. Most surface activity takes place at night, although diurnal activity is also reported. Larval forms are the life stage most likely to be observed.

Larvae and gilled adults can be observed day or night in streams. During the day, they are typically concealed under rocks or woody debris; at night, they are less likely to be sheltered and more likely to move about in streams.

The female lays her eggs in the spring and then guards the eggs until they hatch about 200 days later. The larval period is 18 to 24 months or may be permanent (gilled adults) depending on local conditions. Sexual maturity takes place in all forms that are around 4.5 inches snout-vent length.

When this salamander perceives a threat, their defensive behaviors include an audible growl, tail waving, emitting of noxious and toxic skin secretions, and biting.

This map from the Washington Herp Atlas illustrates the distribution of Pacific giant salamander in Washington based on records in the WDFW database as of 2016. If you see this species in areas that are not indicated on the map or have more recent observations (less than 10 years), please share your observation using the WDFW wildlife reporting form.

For a map of range-wide distribution and conservation status of this species, check out NatureServe Explorer and the International Union for Conservation of Nature.

The state conservation status of the Pacific giant salamander is “secure” based on the assumption that it is common according to the most current records.

Activities that alter the integrity of small and medium-sized forested streams are of concern especially those actions that increase water temperature and sedimentation. Forestry practices that do not protect streams from sedimentation may be particularly problematic for salamander populations that occur in low-gradient streams where increased silt deposition may eliminate microhabitats crucial for the survival of the species. This happens when silt fills spaces between rocks and logs that would otherwise be used as sheltering, hiding, and nesting sites. Protecting riparian buffers around streams is important at sites occupied by these salamanders.