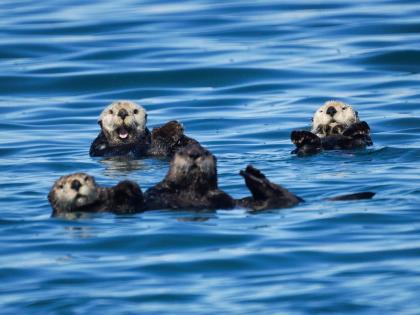 Washington’s population of sea otters is low, but it has shown steady growth to almost 2,800 animals in 2019 since its reintroduction from 59 individuals in 1969 and 1970. Oil spills are the greatest potential threat to the population. Otter mortality can also result from incidental capture in nets and traps set for fish, shellfish, and crabs.

The sea otter is the smallest of the marine mammals and the largest member of the weasel family (Mustelidae). Individuals spend their time either diving for food or floating on their backs while resting, grooming, or consuming their prey. Unlike other marine mammals, sea otters have no blubber, and rely on the insulating qualities of their incredibly dense fur for thermoregulation.

Sea otters are commonly found in rocky marine habitats and kelp beds within about a mile from shore. Females tend to use habitats closer to the shore than males.

They are often found in rocky marine habitats with an abundance of kelp, although other habitats are used. In rough weather, otters take refuge among kelp or in coves and inlets.

The sea otter is a carnivore and feeds on urchins, crabs, clams, mussels, snails, and chitons. It uses rocks and its powerful jaws to break the shells and exoskeletons of its prey and expose the edible interiors. Sea otters are considered a keystone species: by preying on urchins, they improve overall productivity of kelp forests, including for marine invertebrates and fish.

Sea otter fur is the densest of any known animal, which made its pelt extremely valuable to fur traders; sea otters were overexploited in the 1700s and 1800s and extirpated in the state.

Females give birth to a single pup in approximately two-year intervals, and pups can be born at any time of year in Washington.

Otter mortality can result from disease, predation, oil spills and incidental capture in nets and traps set for fish, shellfish, and crabs.

The sea otter is found only in the northern Pacific Ocean. In Washington, it is limited in distribution to the marine waters from south of Destruction Island north to Cape Flattery, and east to Pillar Point in the Strait of Juan de Fuca. The Washington population had increased steadily from 59 individuals reintroduced in 1969 to 1970 to almost 2,800 otters in 2019. Annual WDFW surveys document the population growth and distribution of this species (see the Resources section).

For maps of range-wide distribution and conservation status of this species, check out NatureServe Explorer and the International Union for the Conservation of Nature Red List.

Limited information is available regarding the response of sea otters to climate change, but as ocean temperature and other conditions vary, it seems likely they will be impacted to some extent. Their sensitivity will be primarily due to changes in prey abundance (e.g., red urchins, clams, bivalves), particularly since sea otters require large amounts of prey (~30% of their body mass per day) to meet their metabolic requirements. A variety of sea otter prey may be sensitive to increasing ocean acidity and possibly increasing water temperatures, and declines in prey abundance could impact sea otters, though their sensitivity may not be as high due to their ability to switch between prey species. Additionally, increasing temperatures could promote survival of marine bacterial pathogens that infect sea otters and cause mortality, though there are high levels of uncertainty regarding the level of increase in and potential effects of bacterial pathogens on sea otters. Sea otters may also be sensitive to increased winter storm intensity and resulting high surf conditions that could result in higher mortality.

See Climate vulnerability section above for information about threats posed to sea otters by climate change.