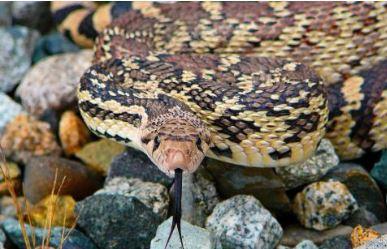 Gophersnake using its tongue to test the air for scents - Methow Wildlife Area
Category: Reptiles
Family: Colubridae
Common names: Bull snake
Ecosystems: Shrubsteppe
If you see this species, please share your observation using the WDFW wildlife reporting form. Providing detailed information such as a photo and exact coordinates will improve the confidence and value of this observation to WDFW species conservation and management.

According to NatureServe, the state conservation status of the gophersnake population is considered “secure” in Washington.

This snake is often misidentified as a rattlesnake because the two species have similar markings and defensive behavior. Gophersnakes will bite if threatened, but the bite is not poisonous. These snakes serve an important function in wildlife communities, preying extensively on small mammals.

The gophersnake is a large snake with dark blotches, a distinct eye stripe and a tail that tapers to the tip. Adults can grow to around 6 feet total length in the Northwest. In Washington, they are usually beige or tan with large dark brown or black square-shaped blotches down the back and smaller blotches on the sides. The tail is banded. The dorsal (topside) scales are keeled with 29 to 37 scales at mid-body. The underside is white with black spots on the edges of the ventral scales.

The head is somewhat triangular in shape, becoming more pronounced when the snake is agitated. A distinct eye stripe is present from the edges of the jaw, through the eyes and across the snout. A small dark “tear-like” marking occurs below each eye. The pupils are round.

In comparison to rattlesnakes, gophersnakes differ in their physical appearance by lacking a rattle and facial pits. They also have smaller, square, dorsal spots; oval pupils; a narrow eye stripe that extends both to the posterior edge of the jaw and below the eye; and scales that are less keeled.

The gopher snake specimens collected from Puget Sound in the 1800s were a different subspecies (Pacific gophersnake, P.c. catenifer) than those found in eastern Washington (Great Basin gophersnake, P.c. deserticola).

For more details about gophersnake, see the Washington Herp Atlas.

In Washington, gophersnakes are primarily a species of dry habitat types such as shrubsteppe, Oregon white oak and ponderosa pine forests. They spend a great deal of time below the surface in animal burrows. They can be active day or night.

Gophersnakes exhibit dramatic defensive behaviors including hissing, puffing the body, coiling, flattening the head, vibrating the tail, and striking. This behavior, combined with their general appearance, mimics rattlesnakes. Gophersnakes will bite if threatened, but the bite is not venomous.

Gophersnakes occur east of the Cascade Mountains primarily in the Columbia Basin and Okanogan ecoregions. A few occurrences are documented in the East Cascades Ecoregion.

Two gophersnake specimens, collected in the late 1800s from the “Puget Sound”, are housed in the U.S. National Museum, Washington D.C. George Suckley, a physician and naturalist with the Pacific Railroad Surveys 1853 to 1855, reported that the gophersnake (Pacific gophersnake) was “found sparingly at Puget Sound.”

The gophersnake appears to be common and widespread. No major declines have been reported. The state conservation status of the gophersnake is “secure” based on the assumption that it is common according to the most current records.

Unfortunately for gophersnakes, people who mistake them for rattlesnakes often needlessly kill them.

Gophersnakes are particularly easy to find on roads. It is common in the summer to find them basking on roads in the late afternoon and early evening. They exhibit behaviors that make them particularly vulnerable to being killed by vehicles. They tend to bask with their bodies in a straight line and move by inching their way across roads with the body fully extended. When approached, they tend to take a defensive stand (coiling) instead of fleeing to the side of the road.