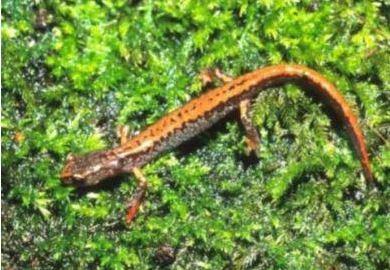 This salamander was listed as a Washington state "sensitive" species in 1993 based on their rarity, specific habitat requirements, and need for a comprehensive approach to protect their habitat.

Larch Mountain salamanders are primarily associated with talus and other rocky habitats although in some areas the association is with older forest types.

NOTE: if submitting photos of this species, it is helpful to include photos of the salamander’s topside, underside, and sideview, plus a close-up photo of the rear outer toe.

The Larch Mountain salamander is a small, lungless, striped salamander (less than 2 inches snout to vent length) and 4.33 inches total length. The color on the sides is black or dark brown with white speckling and there may be flecks of the dorsal (topside) stripe color. The dorsal stripe is reddish, yellowish, brown, or tan, and has a scalloped edge and extends to the tip of the tail. The underside is characteristically salmon-pink, red, or reddish orange but a small number of individuals have white or gray undersides. In some adults, with age, the stripe becomes obscured by the large amount of dark pigmentation.

The outer toe on the hind foot has only one segment (phalanx). The costal groove count ranges between 14 and 16 but is usually 15.

The presence of the nasolabial grooves (nose to mouth indentations) separates Lungless Salamanders from other types of salamanders.

The Woodland Salamanders (Plethodon species) in Washington are similar in general appearance. The following traits distinguish the Larch Mountain salamander: 1) the underside is pinkish or red, 2) the dorsal stripe has a scalloped edge with dark pigmentation in a herringbone configuration, 3) there is dense white flecking on the intercostal folds but not in the costal grooves, 4) the stripe typically ends at the base of the head and, 5) the outer toe on the hind foot is a quarter the size of the fourth toe.

There is no free-living larval stage of Larch Mountain salamander; hatchlings emerge as fully formed miniature versions of the adults. Coloration in juveniles is similar to adults, but the dorsal stripe is more even-edged with brighter coloration and the red pigmentation on the belly tends to be limited to single or multiple blotches or flecks.

Larch Mountain salamanders are associated with talus, scree, gravelly soils and other areas of accumulated rock where spaces exist between the rock and soil. This species inhabits a diverse range of forested and non-forested habitats.

Larch Mountain salamanders are lungless and depend on their moist skin surfaces for oxygen uptake. They spend most of their lives in the subterranean environment, only being surface-active about 20 to 90 days per year. Surface activity is triggered whenever moisture and temperature regimes are appropriate, primarily in the spring and fall.

Sexual maturity is reached at 3 to 3.5 years for males and 4 to 4.5 years for  females. Larch Mountain salamanders are predators on a variety of invertebrates.

The movements are poorly documented, but home ranges tend to be only 10 to 100 feet in diameter.

This map from the Washington Herp Atlas illustrates the distribution of Larch Mountain salamander in Washington based on records in the WDFW database as of 2016. If you see this species in areas that are not indicated on the map or have more recent observations (less than 10 years), please share your observation using the WDFW wildlife reporting form.

For maps of range-wide distribution and conservation status of this species, check out NatureServe Explorer and the International Union for the Conservation of Nature Red List.

Larch Mountain salamanders are suspected to be sensitive to climate change because of their specialized habitat requirements that include moist talus and rocky areas and the fact that they are limited to below ground retreats unless surface conditions are moist and air temperatures are moderate. Therefore, longer periods of warmer and drier conditions could reduce the window for surface activity and dispersal. Direct mortality from dry conditions are unlikely to occur unless the conditions are so extreme that the below ground retreats completely dry. Little is known about the conditions below ground and, therefore, this vulnerability. Climate change conditions that result in increased rainfall could be beneficial to the species by increasing the window when surface activity is possible but too much rain might compromise the subterranean microhabitats.

See Climate vulnerability section above for more information about the threat posed by climate change to Larch Mountain salamanders.

Any ground-disturbing activity or land use that changes the moisture regimes and permeability of inhabited rocky substrates, such as over-story tree removal and gravel removal, may threaten populations. In addition, they are small and cannot move very far. These factors all hinder dispersal and colonization to new areas and limits gene flow between populations.

WDFW has partnered with the U.S. Forest Service to conserve Larch Mountain salamanders. Nothing is known about population trends in this species. Surveys were conducted at 825 forested sites from 1996 to 2002, with individuals detected at only 55 (6.7%) locations. Observations suggest that Larch Mountain salamanders are patchily distributed but locally abundant at a number of sites in the Columbia River Gorge and Washington Cascades. In 2008, there were 145 known locations, with 103 on federal lands and 42 on non-federal lands; most of the sites are in Washington. About 70% of currently known sites on federal lands occur in areas with special management designations, such as late seral reserves.

Regarding geographic variation and genetic structure, DNA analysis has indicated there was substantially less differentiation among populations of Larch Mountain salamanders in Washington than in populations in Oregon. The Columbia River provides a long-term barrier indicating that populations are currently on separate evolutionary trajectories. They suggested that distinct management strategies for northern versus southern populations may be appropriate.