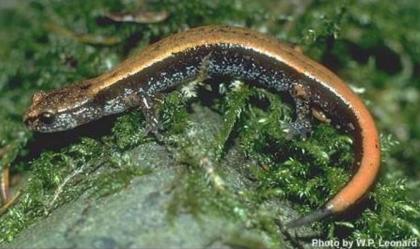 Western red-backed salamander  (W.P. Leonard, Copyright)
Category: Amphibians
Family: Plethodontidae - Lungless salamanders
If you see this species, please share your observation using the WDFW wildlife reporting form. Providing detailed information such as a photo and exact coordinates will improve the confidence and value of this observation to WDFW species conservation and management.

These salamanders are common and apparently well-distributed throughout their historical range in Washington.

A small, thin, salamander with a dorsal (topside) stripe. Adults range from 1.6 to 2.3 inches snout to vent length, 2.75 to 4.5 inches total length. The dorsal stripe is well-defined, has even edges and typically extends to the tip of the tail. The color of the dorsal stripe can be red, yellow, olive or tan. The sides and venter are dark brown to black with “salt and pepper” speckling. Patches of the dorsal stripe color are not present on the sides. The tops of the limbs closest to the body are often the same color as the stripe.

Melanistic (dark-pigmented) western red-backed salamanders make up approximately 10 percent of coastal forest populations. Melanistic individuals may completely lack the dorsal stripe, or the stripe may be partially present or irregular. Other atypical color morphs include weakly melanized individuals that are the color of the dorsal stripe over the entire body and “piebald” individuals with a light body color, dark blotches and no definite stripe.

There are usually 16 costal grooves (range of 14 to 18) and 2.5 to 5.5 (usually 3.5 to 4.5) costal folds between toes of adpressed limbs. The snout narrows toward the tip. The tail is round in cross section. This salamander has nasolabial grooves (a fine groove that extends from the nostrils to the edge of the upper lip), which are unique to Lungless Salamanders (Plethodontids).

Juveniles are similar to adults in general appearance but tend to have more vivid coloration. There is no free-living larval period; eggs hatch into fully formed miniature versions of the adults.

Long-toed salamanders are similar in general appearance but are Mole Salamanders (Ambystomatids). They differ in having stouter bodies, rounded snouts, laterally compressed tails and no nasolabial grooves.

Western red-backed salamanders are a terrestrial species inhabiting forested stands of all ages. They are commonly associated with rocky areas and the edges of streams and seeps, but they are not limited to these habitats. They shelter under rocks, forest litter, sword ferns and downed woody debris.

During the dry summer months, they can be found under surface objects that retain moisture and in moist habitats associated with the edges of streams and seeps. Based on mark-recapture fieldwork, they show a high degree of site-specificity and maintain relatively small home ranges (less than 10 square feet).

They are surface active at night when the ground is saturated with water and temperatures are above freezing, primarily in the fall, winter, and spring.

Breeding times are geographically variable. Courtship behavior has been observed in Jefferson County in late September and early November. Females oviposit (lay eggs) during the spring and summer. Typical of woodland salamanders (Genus Plethodon), a female attends the eggs until development is complete. Nests are rarely found suggesting the females lay eggs inside decayed logs, in spaces between rocks, or in other underground retreats. Juveniles appear in the fall.

In Washington, western red-backed salamanders occur in all ecoregions west of the Cascade Crest. They are known from several islands in the southern and central Puget Sound including Bainbridge Island, Hartstene Island and Hope Island and have also been found on Long Island in Willapa Bay. They have not been found in the San Juan Islands.

This map from the Washington Herp Atlas illustrates the distribution of western red-backed salamander in Washington based on records in the WDFW database as of 2016. If you see this species in areas that are not indicated on the map or have more recent observations (less than 10 years), please share your observation using the WDFW wildlife reporting form.