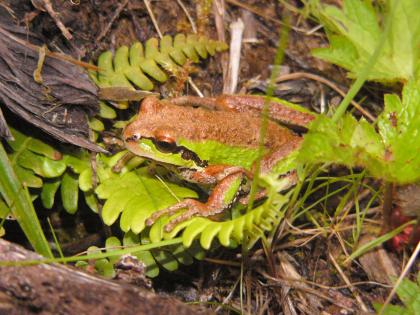 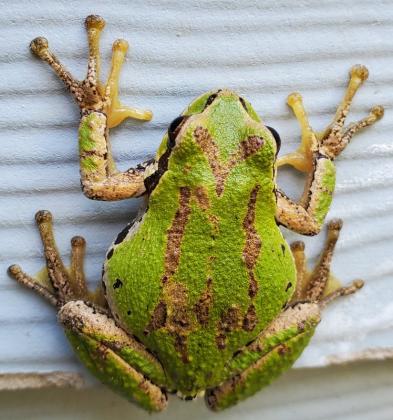 This Pacific treefrog has markings on its back. (Libby Hogan)
Category: Amphibians
Family: Hylidae
Common names: Pacific chorus frog
If you see this species, please share your observation using the WDFW wildlife reporting form. Providing detailed information such as a photo and exact coordinates will improve the confidence and value of this observation to WDFW species conservation and management.

This is the most common frog species in Washington. While local declines are known to occur in some urbanized areas, this species persists in a variety of habitats, including developed and disturbed areas.

No major declining trends have been noted in the state. According to NatureServe, the state conservation status of the Pacific treefrog population is considered “secure” in Washington.

The dorsal body (topside) color is typically green or brown, but can also be shades of gray, red, copper, or some combination of all these colors. A conspicuous dark mask extends from the tip of the nose through the nostril, eye, and tympanum to the shoulder. Frequently, two or three stripes run down the back and a “Y” shaped marking exists on the head between the eyes. These markings may be discontinuous, appearing more like spots or blotches or may be subtle or absent. Other dark blotches or markings may be present on the sides of the body and limbs. The ventral (underside) surfaces are mostly white, often with yellow to yellow-orange coloration on the legs and sides of the belly; mature males also have darkly pigmented throats with a translucent yellow wash and wrinkly skin. Newly metamorphosed Pacific treefrogs look similar to adults.

Pacific treefrog tadpoles (aquatic larval stage) are the only tadpoles in Washington that, when viewed from above, have eyes located on the margins of the head. The eyes, especially in large tadpoles, stick out from the outline of the head. The tadpole has a tail fin with a high arch that starts mid-way along the back and is rounded at the tip. The overall coloration is brown or olive usually with black speckling (but not inky black spots). The underside is white with metallic iridescence. Tadpoles grow to about 2 inches total length before metamorphosis. Newly metamorphosed Pacific treefrogs range in size from approximately 0.5 to 0.7 inches snout to vent length.

The eggs are laid in small loose packets of around 9 to 70 eggs. The egg packets are approximately 0.8 to 1.6 inches in diameter. Individual eggs, when fully expanded, are small with the ovum and gel together measuring less than 0.3 inches in diameter. Egg packets are typically attached to a brace, often vegetation; less frequently, they are laid directly on the sediments.

In comparison, eggs of the Great Basin spadefoot are arranged somewhat like a bunch of grapes with each egg being loosely attached to the next instead of being contained within a single small cohesive packet like that of the Pacific treefrog. Eggs of long-toed salamanders, when fully expanded, are larger and somewhat darker on the pigmented (upper) side with individual eggs, including ovum and gel, measuring 0.4 inches or greater in diameter.

Adult males produce a variety of calls in the breeding chorus including a two-part advertisement call, “rib-it” or “crek-ek,” an enhanced male attraction call, and a trilled encounter call. The choruses are audible from great distances. Outside the breeding season, males produce a one-part dry land call. These calls are produced throughout the year except during the driest and coldest periods. Pacific treefrogs are the most commonly heard frogs in Washington. Listen to the calls of Pacific treefrog in this short audio clip.

Pacific treefrogs are able to utilize a wide variety of habitats and persist even within urban and disturbed areas, where pockets of undeveloped habitat exist. In the Columbia Basin, their distribution is limited to areas with water. This species was not detected during an extensive herpetological inventory conducted at the Hanford Site in1996 and 1998. This is the driest area of the state and may exceed the species’ tolerance limits.

This species is prolific and the tadpoles are usually the most common amphibian larvae at any breeding site.

Transformed treefrogs are terrestrial but need to be in moist microhabitats or near water. Terrestrial habitats include wet and dry forests, prairies, alpine areas, and both shrubland and grassland communities. Contrary to strict interpretation of their common name, they tend to be found on the ground or in shrubs.

Much activity is nocturnal, especially at low elevations, but it is not unusual to find them out during the day.

The Pacific treefrog is the most widespread and common frog species in Washington and occurs in all ecoregions.

This map from the Washington Herp Atlas illustrates the distribution of Pacific treefrog in Washington based on records in the WDFW database as of 2016. If you see this species in areas that are not indicated on the map or have more recent observations (less than 10 years), please share your observation using the WDFW wildlife reporting form.

The state conservation status of the Pacific treefrog is “secure” based on the assumption that it is common according to the most current records.

Larvae may not persist in the presence of introduced warmwater fish. Pollution and chemical contaminants may cause declines or localized extinctions in affected areas.

Populations with malformations, especially in the form of extra limbs, have been found in Washington. Frogs that breed in ponds with high levels of nutrients from fertilizers, cattle or other sources, may be at higher risk for developing malformations. Current research indicates that a trematode parasite in the genus Ribeiroia often causes these deformities. A suggested reason for the apparent increase in the number of anurans found with deformities is that eutrophication causes a predator-mediated shift in snail species composition toward the snail Planorbella spp., the exclusive first intermediate host of the parasite Ribeiroia ordatrae.