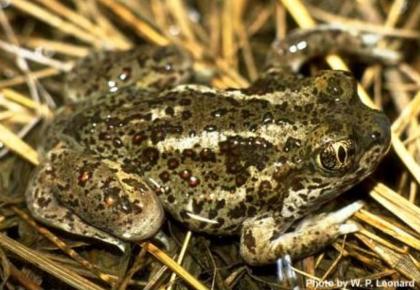 The Great Basin spadefoot is a small to medium-sized, light-colored toad with a plump body. (W.P. Leonard, Copyright) 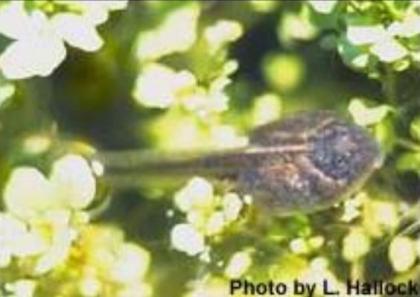 The tadpole has a slightly flattened shape and a tail fin starting at the tail-body junction.
Category: Amphibians
Family: Pelobatidae
Ecosystems: Shrubsteppe
If you see this species, please share your observation using the WDFW wildlife reporting form. Providing detailed information such as a photo and exact coordinates will improve the confidence and value of this observation to WDFW species conservation and management.

This toad occurs throughout the Columbia Basin and is locally common in many areas. No declines have been documented in Washington.

According to NatureServe, the state conservation status of the Great Basin spadefoot population is considered “secure” in Washington.

Adults range in size from 1.5 to 2.5 inches snout to vent length. A slight swelling, called a boss, is located between the eyes. The dorsal body (topside) color is tan, light brown, gray, or olive with indistinct light streaks down the back and sides. The skin is covered with slightly raised brown and/or reddish bumps. Ventral (underside) surfaces are light-colored except that in males the throat is dusky colored and nuptial pads are present on the inner most front toes. Newly metamorphosed spadefoots look similar to adults and range in size from approximately 0.4 to 0.8 inches snout to vent length.

The tadpole (aquatic larval stage) is easily distinguished from other tadpoles in Washington by the close-set dorsal eyes, prominent nostrils and the distinct separation between the triangular head and the rest of the body (dorsal view).

The tadpole has a slightly flattened body shape and a tail fin that starts at the tail-body junction. The overall coloration is dark with lighter dorsolateral bands. The dorsal fin extends just past the end of the tail tip and the end of the tail tapers slightly. The belly has three distinct longitudinal sections and a golden iridescence. The tail musculature is light in color and the tail fins are finely reticulated with light brown. When looking down on the tadpole, the triangular head is distinct from the body, although the outer silhouette is continuous. Tadpoles grow to between 1.2 to 2.75 inches total length before metamorphosis.

The eggs are laid in small loose packets of 10 to 40. The egg packets are approximately 0.6 to 0.8 inches long axis length. The shape of the egg packet is irregular with each egg distinguishable from the others, somewhat like a cluster of grapes. Individual eggs are small with the ovum and gel together measuring less than 0.2 inches in diameter and each egg can be easily separated from the mass. Egg masses are attached to vegetation or laid unattached directly on the sediments in shallow water.

For comparison, the egg packets of the Pacific treefrog are more rounded and symmetric in general appearance (not like a bunch of grapes) and individual eggs cannot be easily separated from the cluster.

The long-toed salamanders have individual eggs (ovum and gelatinous envelop together when fully expanded) measuring 0.4 inches or greater in diameter.

The advertisement call of the Great Basin spadefoot is a monotonous, grating, snore-like “wa-wa-wa” audible at great distances. Others describe the call as a low-pitched quacking. The release call is a grating extended single note “waaaaaaaa” accompanied by an arching of the body. Listen to the calls in this short audio clip.

Great Basin spadefoots occur primarily in shrubsteppe. A variety of aquatic habitats are used for breeding including slow flowing springs, seasonal pools, irrigation ditches and ponds. Transformed spadefoots are nocturnal and completely terrestrial, only returning to water for breeding.

Spadefoots are adapted to survive in arid climates by spending long periods of time buried under ground. They are able to quickly bury themselves in loose soils by using their hind legs in a circular motion to back into the soil. They can remain buried for months at a time and can tolerate high levels of water loss.

Activity is reported to be primarily associated with rains and periods of high humidity, however, in many areas of the Columbia Basin, it is common to find individuals on roads at night without precipitation. Spadefoots remain active until late October-early November. Overwintering behavior is unstudied in Washington, but it is likely subterranean.

Great Basin spadefoots start breeding in late March in the Columbia Basin. They are typically “explosive breeders” with all breeding completed in a period of a few days. However, at some sites, males call for weeks or even months. Breeding duration at each site varies with conditions such as water temperature and hydroperiod.

Eggs hatch typically in 2 to 3 days, but development can take longer if water temperatures are cooler. Tadpole development typically takes 1 to 2 months, but this can accelerate with high temperatures if pool drying threatens to strand developing larvae.

This map from the Washington Herp Atlas illustrates the distribution of Great Basin spadefoot in Washington based on records in the WDFW database as of 2016. If you see this species in areas that are not indicated on the map or have more recent observations (less than 10 years), please share your observation using the WDFW wildlife reporting form.

The state conservation status of the Great Basin spadefoot is “secure” based on the assumption that it is common according to the most current records.

No obvious threats exist at this time, but lack of systematic documentation at sites where they were historical present makes interpretation difficult. Considerable conversion of shrubsteppe, that contained seasonal aquatic habitats historically, provides some justification for refining the basis of existing information.

Great Basin spadefoots apparently can tolerate some habitat alteration, often persisting in irrigated agricultural lands. It is possible that they have actually increased in abundance due to the prevalence of breeding sites provided in some areas by irrigation water, but no systematic surveys have been conducted to document such patterns.

Hall, J. A. 1998. Scaphiopus intermontanus. Catalogue of American Amphibians and Reptiles. Society of the Study of Reptiles and Amphibians 650: 1-17.