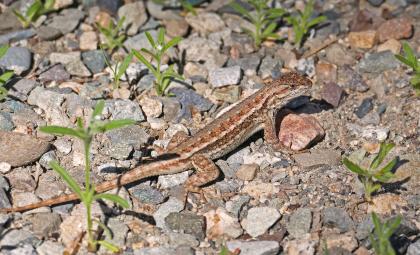 A western fence lizard located in Winthrop, Washington
Category: Reptiles
Family: Iguanidae
Common names: Blue belly lizard
If you see this species, please share your observation using the WDFW wildlife reporting form. Providing detailed information such as a photo and exact coordinates will improve the confidence and value of this observation to WDFW species conservation and management.

These lizards are common in Washington, however, bulkheading and bank stabilization projects in the Puget Trough may threaten populations, and the succession and invasion of shrubs onto oak-prairie habitat may have caused unknown losses.

According to NatureServe, the state conservation status of the western fence lizard population is considered “secure” in Washington.

The western fence lizard is a medium-sized gray, brown or brownish-black lizard with keeled, spiny scales dorsally (topside) and two rows of light and dark markings down the back. Largely based on temperature, individuals can lighten or darken considerably; when individuals darken, dorsal markings become difficult to see. Adults range in size from 2.2 to 3.4 inches snout to vent length.

Hatchlings and juveniles are similar in appearance to adult females but usually have lighter and more contrasting dorsal coloration.

The northern sagebrush lizard appears similar to the western fence lizard, but they are smaller in size (adults less than 2.4 inches snout to vent length), less robust, have orange- or rust-colored axilla (armpits), lack yellow coloration on the posterior surface of the thighs and the spiny dorsal scales are smaller than in western fence lizards. Also in comparison, the male sagebrush lizard has blue mottling on the throat and bright blue patches on the margins of the abdomen, but the entire throat of the mature male western fence lizard is blue and the blue belly-patches are distinctly outlined in black.

The side-blotched lizard is smaller, has fine granular scales dorsally, a gular fold (a fold of skin at the throat) and a black spot on the side of the body behind the forelimbs.

In the Puget Trough, western fence lizards occur along shorelines with accumulations of driftwood. They have also been found in sunny, rocky areas, as well as an oak stand with rubbish piles, along Chambers Creek in Pierce County. East of the Cascade Mountains and in the Columbia Gorge, they primarily occupy dry forests, such as Oregon-oak and ponderosa pine, but also occur in non-forested habitats such as bitterbrush-grassland and grasslands.

On occasion, they have been observed in clear-cuts and other openings in more heavily forested areas on the edge of their range. In treeless habitats, they tend to be associated with rocks, rock outcrops or other features that allow them to climb above the vegetation to bask and watch for prey, and in the case of males, defend territories and attract females. They are excellent climbers and will escape up trees or scamper around rock faces when approached. They are usually common where they occur. At night and when conditions are cool or rainy, they shelter under rocks and logs.

Activity in Washington varies depending on the location of the population. In the Puget Sound, where the climate is mild, activity starts in March. Individual lizards may be active on sunny warm days even earlier. In eastern Washington, activity is typically delayed until April and continues into October. Mating and egg laying behavior has not been described for Washington. Hatchlings appear in August and September in eastern Washington.

In the Puget Trough Ecoregion, observations are limited to marine shorelines and nearby uplands, both on the mainland and in island localities. Exceptions include a 1947 museum record from Manitou in Pierce County and recent observations of lizards near Chambers Creek in Pierce County. The population at Larabee State Park in Whatcom County is introduced.

Two isolated records exist in the Columbia Basin: a 1947 museum record from Dry Falls in Grant County, and an old museum record from Cheney in Spokane County. Western fence lizards have not been reported from these areas or any other area in the Columbia Basin except for these two specimens. Though the collectors were both experienced herpetologists, these specimens should still be checked to make sure that they were correctly identified.

This map from the Washington Herp Atlas illustrates the distribution of western fence lizard in Washington based on records in the WDFW database as of 2016. If you see this species in areas that are not indicated on the map or have more recent observations (less than 10 years), please share your observation using the WDFW wildlife reporting form.

The state conservation status of the western fence lizard is “secure” based on the assumption that it is common according to the most current records. An inventory is needed in the Puget Trough and Blue Mountain ecoregions to determine the current distribution and status.

Conservation concerns are limited to protection of the relatively small number of populations associated with upper beach driftwood accumulations in the Puget Trough Ecoregion. Some of these populations could be lost to bulkheading and bank stabilization projects that seek to create home sites along the desirable Puget Sound shoreline.

Loss of oak-prairie habitat due to succession and invasion of exotic shrubs, especially Himalayan blackberry (Rubus discolor) and Scots broom (Cytisus scoparius), may have contributed to their decline in the Puget Trough Ecoregion. The pattern of loss of oak-habitat in western Washington is generally acknowledged, but unstudied in context of egg-laying reptiles that may require well insulated ground in which to deposit their eggs. The Western fence lizard is one of five egg-laying reptile species that was historically presumably associated with oak-prairie habitat on a wider scale; study of the habitat required for its terrestrial nest would provide significant insight into its management needs.