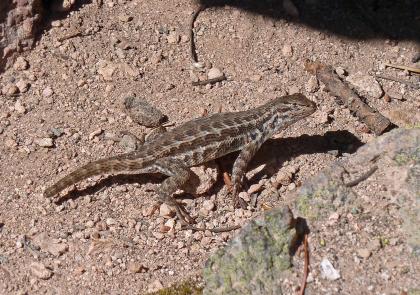 This lizard's status is of concern in Washington based on the species’ rarity and its dependency on sand dunes in the Columbia Basin. Greater than 70 percent of this habitat type has been lost since the 1970s.

This is a small (less than 2.4 inches snout to vent length) gray or brown lizard with a mid-dorsal stripe, two light colored stripes on the back and sides, and a series of dark chevron-shaped blotches between the stripes. The belly is white. Typically, the axilla (arm-pit) is orange or rust colored. On females, this coloration may extend onto the neck and sides of the body. Mature males have enlarged post anal scales, a swollen tail base, bright blue patches on the margins of the abdomen and blue mottling on the throat. Females may have some blue-tinged scales on the margin of the abdomen.

Hatchlings (about one inch snout to vent length) and juveniles are similar in appearance to adults but do not have any blue pigmentation on the belly.

The side-blotched lizard is similar in size and appearance to the sagebrush lizard but has a gular fold, a black spot on the body behind the front forelimbs, and a mottled or spotted dorsal pattern.

The western fence lizard is similar in appearance but the adults are larger (greater than 2.4 inches snout to vent length), have large spiny dorsal scales, keeled yellow scales on the posterior surface of the thighs, and do not have orange or rust colored axilla. The entire throat of the mature male fence lizard is blue and the blue belly-patches are distinctly outlined in black.

Northern sagebrush lizards are associated with vegetated sand dunes and associated sandy habitats that support shrubs and have large areas of bare ground. Their habitat is being fragmented by various factors, degraded by weeds, and converted to agriculture.

Northern sagebrush lizards tend to be common where they occur. They are active on warm, sunny days from early April through October.

Typically, they can be seen on the ground at the edge of shrubs and other vegetation that provide cover from predators and relief from mid-day heat. They can also be observed interacting with other sagebrush lizards under the canopy of shrubs. In cattle-grazed habitats, shrubs may no longer have the lower branches and, therefore, provide less suitable retreats for these lizards.

At night, on rainy days, and on cool cloudy days, sagebrush lizards move underground or shelter under cover objects such as rocks and woody debris. They prey on small insects and other invertebrates such as spiders. Eggs are laid in early summer. Hatchlings appear in early August.

Overwintering habitat has not been studied in Washington but is likely within sand dune habitat.

In Washington, northern sagebrush lizards occur in the Columbia Plateau and Okanogan ecoregions where they occur on sand dunes and associated sandy areas.

This map from the Washington Herp Atlas illustrates the distribution of northern sagebrush lizard in Washington based on records in the WDFW database as of 2016. If you see this species in areas that are not indicated on the map or have more recent observations (less than 10 years), please share your observation using the WDFW wildlife reporting form.

For a map of range-wide distribution and conservation status for this species, check out NatureServe Explorer.

Little to no information exists regarding sensitivity of the sagebrush lizard to climate change. It is likely that their overall sensitivity is greater due to habitat specialization (i.e., vegetated sand dunes), which are sensitive to invasive grasses or altered fire regimes that eliminate habitat. Further, this species is a egg-layer that could be influenced by soil moisture patterns at oviposition sites; but lack of data on typical oviposition sites makes any prediction of potential changes highly uncertain.