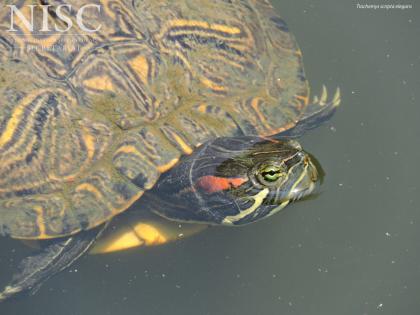 The red-eared slider is a subspecies of pond slider. A bright-red blotch may be seen on the head, like on this turtle. (National Invasive Species Council, Creative Commons Public Domain)

The pond turtle is native to the eastern United States. NatureServe identifies the status of the pond turtle as an “exotic” (non-native) in Washington.

This is a common species. Notable die-offs, involving many animals at the same time, have been reported at a number of Washington Lakes, including Steel Lake and Lake Washington (King County), and Wapato Lake (Pierce County). Causes of the die-offs are poorly understood though animals that were examined were in generally poor condition. The species may be poorly suited for Washington’s climate.

Another common name for the pond slider is the “red-eared slider”. When present, the red blotch on each side of the head can be used to distinguish this turtle from all other turtles. Old turtles, especially males, become very dark (melanistic) and this may obscure the red markings and yellow stripes.

The pond slider is a medium-sized aquatic turtle with yellow streaks on a dark upper shell (carapace) and a bright red blotch on each side of the head. Adults range in size from 3.5 to 14.5 inches. The carapace has wrinkles running the length of the shell. The head and limbs are striped with yellow. The posterior edge of the carapace (marginals) is serrated. The lower shell (plastron) is yellow with symmetrical dark blotches sometimes called “eye spots.”

Males have elongated front claws. As individuals age, the yellow and red markings fade and some adult turtles, especially males, will lack these markings becoming essentially dark all over.

Juveniles have a bright green carapace with yellow streaks and the plastron has many dark “eye spots.”

The painted turtle, a Washington native, has bright red or orange-red markings on the plastron and undersides of the marginal scales of the carapace. The head, however, lacks any red markings.

The western pond turtle, a rare Washington native, is fairly plain in comparison to the pond slider and painted turtle.  The carapace is relatively smooth; olive, dark brown, reddish or black in color; and usually has a pattern of lighter markings (flecks or spots) radiating from the center of the shields (scutes). The plastron is yellow with varying amounts of brown depending on the individual and age. Coloration darkens with age.

Many species of released and escaped pet turtles show up regularly and some can be easily confused with our two native turtles and the pond slider. Box turtles, snapping turtles , mud turtles, as well as Asian and South American turtles have been found in Washington.

The pond slider is primarily aquatic, straying from water only to lay eggs, for dispersal and at times of drought. Still-water aquatic habitats are preferred and include lakes, ponds, wetlands and slow flowing areas of rivers and creeks. They prefer habitats that have muddy sediments and lots of aquatic vegetation.

Sliders are diurnal. They spend a great deal of the day basking on rocks, logs and the shore. They are called sliders because they slide from terrestrial basking sites into the water when approached.

Interestingly, these turtles have been observed swimming and foraging in near-shore marine waters in Puget Sound. Seaweed growing on the shell of one individual suggests the turtle spent a great deal of time in salt water.

Little information has been documented on pond sliders in Washington. In its native range, this species is active as soon as water temperatures warm and the sun’s rays create conditions suitable for basking.

Adults likely overwinter in bottom sediments or within the flooded banks of water bodies.

This species is native to the eastern United States from northwestern Indiana south to Georgia and west to Texas and Oklahoma. Hatchling pond sliders were sold in pet stores all over the United States until 1975 when it became illegal to sell small (less than 4 inches) aquatic turtles due to the ease of contracting salmonella through casual contact with turtles.

This map from the Washington Herp Atlas illustrates the known distribution of pond sliders in Washington as of 2016. The species is more common than the distribution map indicates.

It is unlawful to take from the wild or import into Washington, hold, possess, offer for sale, sell, or release all turtle species into the wild without the proper license to do so (WAC 220-450-030).

The pond slider is classified as a “regulated” aquatic animal species under Washington law RCW 77.135.030.

It is against the law to release non-native species into state waters through intentional or unintentional means.

It is unlawful to release wildlife from captivity except as provided in WAC 220-450-010.

NatureServe identifies the status of the American bullfrog as “exotic” (non-native) in Washington.

Understanding the actual distribution and status of exotic populations in Washington would help determine whether any issues may exist.

The question also remains as to how many established breeding populations actually occur in the state. Although pond sliders are sometimes observed digging holes and depositing eggs, successful hatching in Washington has never been documented. In addition, virtually all sightings of pond sliders involve adults.

Additional work to understand the reproductive capability and population dynamics in Washington would aid decisions about management.

This is an exotic species. At this time, however, there is no recommendation to remove Pond Sliders from Washington water bodies.

General concerns exist about the introduction of non-native turtles to water bodies in Washington. Specifically, the introduced turtles may carry diseases and they compete with native turtles for resources such as food and basking sites.

It is common for pet turtles to escape. People assume a turtle is too slow to escape and place it in the yard to enjoy a sunny day. With the right motivation, however, a normally sluggish turtle will actually move fast enough to quickly disappear from view.

We receive many calls from people who find turtles in urban and suburban communities. In these cases, the first action we recommend is to post a sign in the neighborhood. Likely the owner lives close by and will be searching for the turtle.

We do not recommend that the turtles be allowed to go free. In addition to the above-mentioned concerns, weather conditions are not suitable in western Washington for most pet store turtles, and the turtles will eventually perish. Releasing a pet to the wild is never the right thing. It is harmful to your pet, to native species, to the environment, and to the economy.