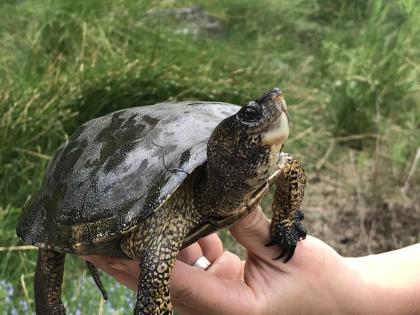 In the 1990s, only two populations of northwestern pond turtle remained in the Columbia River Gorge with estimates of less than 200 individuals. Because of recovery efforts, currently there are six populations with approximately 800 turtles, but many issues remain.

NOTE: if submitting photos of this species, it is helpful to include photos of the turtle’s topside (carapace), underside (plastron), sideview, and head. Learn about physical traits that rule out northwestern pond turtle in this Woodland Park Zoo - Western Pond Turtle Recovery Project FAQ.

The northwestern pond turtle is a medium-size (up to 2.2 pounds or more), plain, aquatic turtle. Adults range in size from 3.5 to 7.5 inches carapace (top shell) length. The carapace is relatively smooth, olive, dark brown, reddish or black, usually with a pattern of lighter markings (flecks or spots) radiating from the center of the shields (scutes -- bony plates comprising the outer shell). The plastron (bottom shell) is yellow with varying amounts of brown depending on the individual and age. The body ground color can be dark brown, light brown or black often with light or dark spotting.  The throat in females is often yellow speckled with black or, in males, plain off-white. Coloration darkens with age. Juveniles tend to have lighter coloration and bolder markings on their shell.

The northwestern pond turtle is one of two turtle species native to Washington; the painted turtle (Chrysemys picta) is more brightly colored with yellow stripes on the head and bright red markings on the underside. Non-native turtle species, often liberated pets, occur in many sites. The pond slider (Trachemys scripta) is the most common of these. Old sliders can particularly be confused with northwestern pond turtles.

For more details about the northwestern pond turtle, see the Washington Herp Atlas.

In Washington, northwestern pond turtles occur in open upland habitats that receive extensive sun exposure such as prairies in the Puget Sound region, oak-pine savanna and other more open forest types in the Columbia Gorge, and pasture. The turtles utilize a variety of flowing and still water habitats in other parts of their range, but in Washington they are only known to inhabit ponds and lakes. These turtles spend a great deal of time basking on logs at the surface of ponds.

This species is primarily aquatic, but strays from water to lay eggs, to disperse to new water bodies, to overwinter and to aestivate during periods of drought. They nest in grasslands and open woodland around ponds.

These turtles are active as soon as water temperatures are warm enough and basking is possible, usually in late March or early April. Adult activity continues until late September or October depending on weather conditions and location. A telemetry study of juvenile turtles found that some turtles were still active in December at a site in the Columbia River Gorge

Historical declines of this species resulted from commercial exploitation for food, alteration and loss of habitat, and introduced predators such as bullfrogs and large-mouth bass.

By 1990, the northwestern pond turtle population in Washington had declined to an estimated 150 animals remaining in the wild at only two sites in the Columbia River Gorge.  Because of recovery efforts, currently six populations occur in Washington with approximately 800 turtles. Two sites are in South Puget Sound and four occur in the Columbia River Gorge.

This map from the Washington Herp Atlas illustrates the distribution of northwestern pond turtle in Washington based on records in the WDFW database as of 2016. If you see this species in areas that are not indicated on the map or have more recent observations (less than 10 years), please share your observation using the WDFW wildlife reporting form.

For a map of range-wide distribution and conservation status of this species, check out NatureServe Explorer and International Union for Conservation of Nature Red List.

Overall, a lack of information exists regarding sensitivity of the western pond turtle to climate change. Sensitivity of this species may be affected by warming temperatures on nest sites that influence offspring sex ratios, increasing the number of females even with small increases in temperature (<2˚C). Western pond turtles lay highly calcified eggs similar to bird's eggs that are adapted to dry nesting conditions; nest sites that get too moist will cause the eggs to crack medially and their contained embryos not develop properly - hence, excessive rainfall during the nesting interval could result in nest failures. However, it is possible that warming could benefit this species by providing more warm days for developing embryos, as western pond turtles in Puget Sound are at the northern extreme of their range. Water temperatures in PNW habitats, especially in WA, are often limiting, resulting in the need for WPTs to bask to raise their body temperatures for adequate rates of digestion and for females to yolk up eggs at effective rates; warming temperatures could make the aquatic environment less temperature limiting, especially where basking sites may be limiting.

The northwestern pond turtle is classified as an endangered species in Washington. The law protects endangered species and prohibits them from being hunted, taken maliciously, harassed, or possessed. This is for all life stages including adults, juveniles, and eggs. Keeping this species as a pet in Washington is also prohibited because species native to the state cannot be kept in captivity. The only exceptions are for zoos, educational centers, rehabilitation facilities, and research facilities that receive permits from WDFW.

Many issues remain for the recovery of this species. Upland habitat must be managed to prevent invasive weeds from overgrowing the nesting areas. Predation by non-native American bullfrogs on hatchlings, as well as mammalian predation on nests, prevents natural recruitment of hatchlings at many sites. In recent years, shell disease has emerged as a major concern that has affected a substantial number of turtles. The cause of this disease is under investigation but is not yet known.

See the Climate vulnerability section for information about the threats posed by climate change to the northwestern pond turtle.

In the 1990s, only two northwestern pond turtle populations remained in the Columbia River Gorge, with estimates of less than 200 individuals. Because of recovery efforts, currently there are six populations with approximately 800 turtles.

Survival of northwestern pond turtle hatchlings in the wild was believed to be near zero based on the lack of recruitment to larger size classes. To address the high mortality rate of small hatchlings in the wild, especially due to predation by bullfrogs, a collaborative head-start program was initiated in the 1990s with Woodland Park Zoo, and later with the Oregon Zoo. WDFW works with these zoos to raise the turtles from the egg or hatchling stage for approximately 9 to 10 months, when the accelerated growth rates result in turtles large enough to avoid predation when released back into the wild. A captive breeding program was also started at the Woodland Park Zoo to build a population of turtles for release into suitable habitat in the Puget Sound area.

The multiple decades old head-start program has been very successful in helping reverse the fate of the western pond turtle in Washington. More than 800 turtles now occur at six sites, well on their way toward achieving recovery objectives. Wild turtles still persist at two of the Columbia Gorge sites, but nearly all of the turtles in Washington were head-started.

In addition to head-start efforts, WDFW and partners work to protect and restore habitat, manage invasive plant and animal species, conduct research to enhance recovery, and provide information to the public regarding the plight of this species. Listen to a WDFW biologist talk about threats to the northwestern pond turtle and the efforts underway to protect them and what the public can do to help in this informative video.

The Sustainability in Prisons Project

WDFW participates in this project, which is a partnership founded by The Evergreen State College (TESC) and Washington State Department of Corrections (DOC). With critical input from many additional partners such as WDFW, TESC and DOC develop and deliver a wide range of science, sustainability and environmental education programs in all 12 Washington State prisons. Learn more about this project and watch a video that shares the experiences of formerly incarcerated partners who have made a significant contribution through their efforts to help perpetuate imperiled species, such as the northwestern pond turtle. This film was made prior to the COVID-19 pandemic.