WDFW is partnering with the Washington Invasive Species Council (WISC) on an art contest to  design an exterior wrap design for WDFW's new Invasive Species Education Trailer. The trailer will travel to schools, libraries, and events all over the state and northwest to inform the public about invasive species that threaten Washington’s natural resources, economy, recreation and ecology.

This art contest is an opportunity for students in high school grades 9 through 12 to demonstrate their digital art skills by using mediums such as photographs, illustrations, cartoons, digital paintings, and more.

*If you have already started your design, please be sure to double-check trailer dimensions below as an error was found in the original dimensions.

Please review all rules for the 2022 Invasive species art contest here or below prior to starting work.

All art contest entries must include:

They must also depict invasive species (with common name labels) that are the greatest threats to Washington’s waters, parks, and wildlands, along with one or more of the following messages:

Entries must also include a description(s) of one or more species that could be or has been introduced into waters, parks, or wildlands. Options are:

Winning designs must also include information on prevention (How You Can Help - Stop Aquatic Hitchhikers) of Invasive Species, such as:

Art contest submissions must be scaled to fit the dimensions of the trailer below as the winning design will be made into a wrap for the trailer. Please be sure to double-check trailer dimensions as an error was found in the original dimensions. The height of the trailer is 84", not 34". 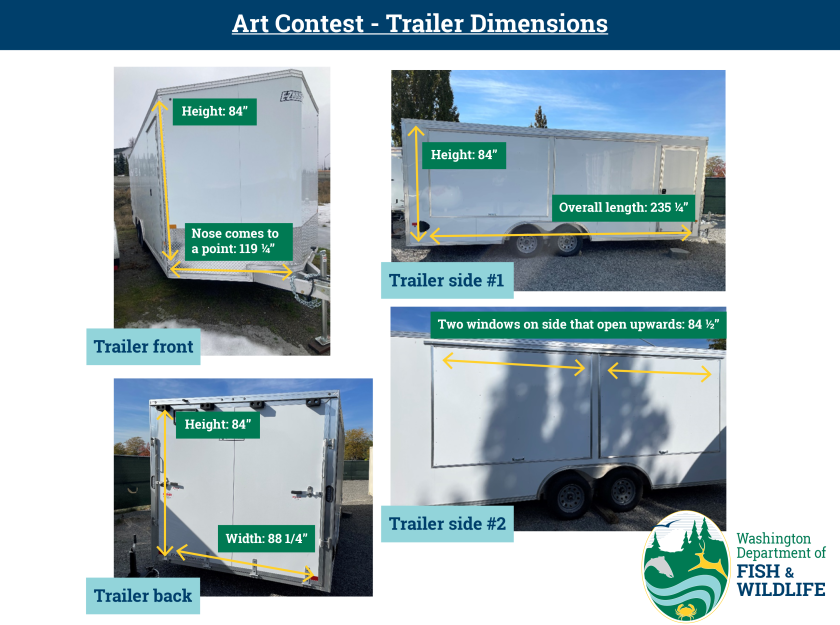 How to submit art for contest

2. Download the image .zip files of logos and photos of mussel dogs Puddles and Fin required to be included in your artwork.

3. Submit the entry form, along with your art, by emailing a PDF or JPEG to invasivespecies@rco.wa.gov. All entries must be submitted in a PDF or JPEG format and a resolution of at least 300dpi.

Two winners will be selected. Prizes for the grand prize winner include an Amazon gift card in the amount of $500, invasive species educational materials, and their design used as a wrap on the WDFW Invasive Species Education Trailer. The runner up will receive a $300 Amazon gift card.

All contest submissions become property of the Washington Invasive Species Council and the Washington Department of Fish and Wildlife. The agencies reserve all rights for the artworks use in publications, in media, online, and in social media. These are not exclusive rights. Artists can use their own submissions freely for other projects.

What are invasive species?

What is the Washington Invasive Species Council?

The Washington Invasive Species Council was established by the State Legislature in 2006 to coordinate invasive species prevention efforts around the state to sustain Washington’s human, plant, and animal communities and our thriving economy.

How can I stay involved?

Get the app and get involved! With a guardian’s permission you can download the WA Invasives app and identify and report invasive species in your community. It’s FREE!