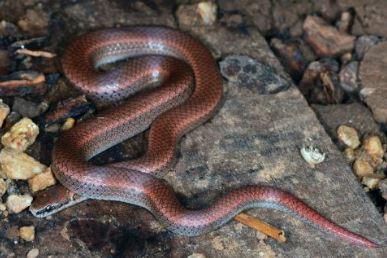 This is the only snake in Washington with a spine at the tip of the tail and alternating bands of white and black on the ventral (underside) scales. (Don Loarie, Creative Commons)
Category: Reptiles
Family: Colubridae
Ecosystems: Shrubsteppe ,  Riparian areas
State status: Candidate
Vulnerability to climate change (More details)

This snake is of conservation concern in Washington based on the small number of documented populations, patchy distribution, and lack of information.

Common sharp-tailed snakes are rarely encountered and little studied. Nothing of what is known about this species in Washington explains their apparent rarity, but there is also no evidence that they are more common based on the small number of observations reported to WDFW and  iNaturalist.

This is a diminutive, semi-fossorial species that is usually less than 12 inches long, and rarely exceeds 16 inches. It is reddish brown above with with indistinct reddish dorsolateral stripes. It has a distinct ventral pattern of alternative black and cream colored bands. It has a short tail that terminates with a small spike-like scale and is the only snake in Washington with this trait (the tails starts after the vent opening). The tail spine is occasionally absent due to injury. Young snakes are redder in coloration and have more distinct lines down the sides than adult snakes.

These snakes have relatively long, re-curved teeth, that are thought to be a specialization for grasping and holding slugs and other soft-bodied invertebrates that are the primary prey of this snake.

See the Washington Herp Atlas for more information about this species.

In the Pacific Northwest, the common sharp-tailed snake are found on the edges of coniferous or open hardwood forest. In Washington, the snakes have been found in: 1) forest openings dominated by Garry Oak often with rock accumulations; 2) riparian/river floodplain with deciduous trees, shrubs and accumulations of decaying down woody logs; 3) shrub-steppe uplands with riparian areas that support deciduous trees and have accumulations of woody debris and rocks.

The snakes are usually found under cover objects in moist rotting logs or stumps, talus, or other accumulations. They are often near streams or in other damp habitats. Small canopy gaps with rocky substrates, particularly those that are south-facing, may be important for thermoregulation, egg development and growth of young. Snakes show evidence of site tenacity, with some snakes found repeatedly under the same cover objects.

Most surface activity occurs when the surface is cool and moist in the spring and fall although observations have been made in most months of the year.

Breeding takes place in April or May. Eggs are laid in late June or July and hatching occurs in the fall. Activity is confined to relatively small areas. The greatest distance moved by two study snakes in Canada was 128 and 305 feet. Many biologists have noted that they find small aggregations of these snakes, for instance, inside of a decaying log.

Common sharp-tailed snakes occur from British Columbia, Canada into southern California. In Washington, common sharp-tailed snakes are known from thirteen disjunct areas. West of the Cascade Mountain crest, there is an historical record for Pierce County and two recently discovered sites on Orcas and San Juan Islands. East of the Cascade Crest observations are from Chelan, Kittitas, Yakima, Klickitat and Skamania Counties. Almost nothing is known about abundance and some occurrences are based on a single observation.

This map from the Washington Herp Atlas illustrates the distribution of common sharp-tailed snake in Washington based on records in the WDFW database as of 2016. If you see this species in areas that are not indicated on the map or have more recent observations (less than 10 years), please share your observation using the WDFW wildlife reporting form.

Overall, a lack of information exists regarding sensitivity of the sharp-tailed snake to climate change. Sensitivity of this species may be influenced by its occurrence along edges of coniferous or open hardwood forest, which are sensitive to warming temperatures, moisture stress, and changing fire patterns. This species may also exhibit some sensitivity to warmer temperatures and changes in precipitation as they are often associated with moist habitats.  This species is often found in and under decaying downed woody debris.  Increased fire frequency and intensity could result in loss of this microhabitat type.  This species is also an egg-layer that could be influenced by soil moisture patterns at oviposition sites; but lack of data on typical oviposition sites makes any prediction of potential changes highly uncertain. Furthermore, this species is a mollusc and soft-bodied invertebrate specialist, so its typical prey base has a high probability of being influenced by soil moisture levels; however, it ability to switch to alternative prey is unknown, so the degree of influence on its prey base is uncertain. Lastly, the species appears to be near-surface active only during periods of higher moisture levels; whether this is directly related to its prey base or its intrinsic moisture requirement or both is unclear. Regardless, the influence of shortened or lengthened periods of surface activity resulting from climate change is uncertain.