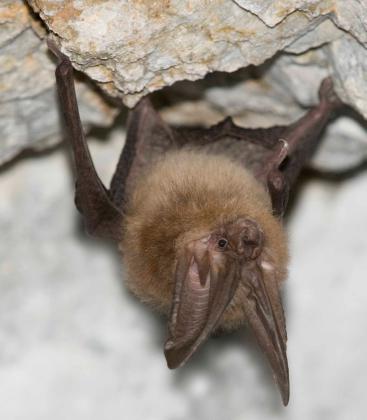 The Townsend’s big-eared bat occurs in small to moderately-sized aggregations at sites throughout the state, where it may be vulnerable due to loss, modification and disturbance of roosting and foraging habitat.  Actions to reduce human disturbance and destruction of important habitat and roosts are considered the most important conservation measures for Townsend’s big-eared bats.

White-nose syndrome is a deadly fungal disease that has been  confirmed in some Washington bat species, but to date, no diagnostic evidence of the disease has been detected in Townsend’s big-eared bats. It is unclear which species of bats may be vulnerable to this disease in Washington. This disease does not affect humans, livestock, or other wildlife.

Townsend’s big-eared bat is a medium-sized insectivorous bat with very large ears, which measure about half its body length and are connected at the base. There are two prominent lumps on either side of the nostrils which may function as sexual scent glands. Their wingspan ranges from 12 to 13 inches and they weigh one-third to one-half ounce, about the weight of one to two large marshmallows. Their wings are large and wide relative to their body size, which provide them with the ability to fly at low speeds, to hover and to maneuver more readily in cluttered environments. Five subspecies are recognized, with only C. t. townsendii present in Washington.

Relative to other bats, Townsend’s big-eared bats’ echolocation calls are at a low sound intensity; essentially, the bats are whispering, making them difficult to detect and monitor by researchers conducting acoustic surveys. Listen to a recording of the species’ echolocation calls made audible to the human ear as a series of high-pitched chirps.

The Townsend’s big-eared bat is considered a subterranean-obligate species across much of its range, depending on caves, abandoned mines and other subterranean features for reproduction and hibernation. This species prefers to roost in open areas, unlike other bat species who roost in crevices or cracks.

Townsend’s big-eared bats use echolocation calls when foraging for insects and flying to avoid objects. The low intensity sounds they produce allow them to locate and glean insects from vegetation or other surfaces and catch flying insects in air near and among foliage. More than 90 percent of the diet is usually comprised of moths. Smaller amounts of other prey such as beetles, flies, and lacewings are also eaten. Tissue moths (Triphosa haesitata), a hibernating moth that develops fat pads in fall, and other moths, such as Scoliopteryx libatrix, occur in some of the caves used by Townsend’s big-eared bats in fall and winter in Washington and may be an important autumn food source for these bats prior to hibernation.

Flight activity usually begins well into the night, later relative to other bats, and extends to before sunrise. After an initial feeding period, these bats rest at night roosts, presumably before a later feeding bout. During the breeding season, nursing females will leave their young (pups) in the maternity colony while they forage and return periodically to feed their pup. Travel distances of 0.5 mile to 11 miles between day roosts and foraging sites are probably typical in the western United States, although longer nightly foraging movements have been noted. Individuals are often loyal to foraging sites and travel routes over successive nights.

Nearly all adult females breed every year. Mating occurs in the autumn and early winter during arousals from hibernation. Females store sperm through winter and delay ovulation and fertilization until spring. In late spring, pregnant females will form maternity colonies that can consist of over 100 adults: males roost separately, apparently solitarily, during this time. Length of pregnancy is quite variable, lasting 56 to 100 days depending on the frequency of torpor by females. Timing of births can therefore show considerable variation within and among colonies and years. Each female will birth one pup who is born flightless and completely dependent on the females. Pups grow fast and are capable of flight usually 3 weeks after birth. Maternity colonies typically are in caves, abandoned mines, concrete bunkers, and buildings such as in attics and barns.

Males and females will hibernate together in caves, abandoned mines, tunnels, and concrete bunkers. Hibernating individuals will roost singly or in small to large groups of multiple individuals. Group sizes can range from 2 to over 100 individuals. Hibernating bats seek open areas with cool stable temperatures ranging from 32 to 53 degrees Fahrenheit. Bats frequently arouse and shift locations within hibernacula or move to a different nearby roost to seek suitable temperatures or to avoid disturbance.

Bats are relatively long-lived mammals for their sizes. Their lifespan ranges from 4 to 10 years, with the oldest report of 16 years. It is assumed as with other bat species that predators include snakes, owls, cats, racoons, falcons, and hawks.

This species occurs from southern British Columbia southward through most of the western United States to central Mexico. Isolated populations also exist in the Ozarks and Appalachians. Documented records exist for most counties in Washington, but are lacking for the southern Columbia Basin and Blue Mountains. Within the species’ range, distribution is often linked to the presence of suitable sites for maternity roosts and hibernacula located near foraging habitat.

Townsend’s big-eared bats generally occur at low densities across their range. Long-term population trends are difficult to assess for most western populations because of the scarcity of adequate count data, the species’ dynamic roosting behavior, low detectability in acoustic surveys, and the use of multiple roosts under some conditions. In Washington, Townsend’s big-eared bats occur at scattered locations throughout the state. Long-term count data are available for only a small number of roosts. Their population size is probably relatively small, but their population trend may be stable.

Townsend’s big-eared bat is found in a variety of habitats across much of the western United States, including in both dry and moist regions. Distribution appears to be linked to the presence of roosting sites (including hibernacula) with suitable temperatures and nearby foraging habitat. In Washington, roosts include caves, abandoned mines, old buildings, bridges, and concrete bunkers. Climate change impacts to this species are speculative. Increased occurrence of wildfire and insect and disease outbreaks and changes in precipitation patterns could negatively impact Townsend’s big-eared bats by altering or eliminating foraging habitat and drinking sources and reducing the suitability of hibernacula (through changes in humidity, temperature, and air movement). This species feeds largely on moths, making it sensitive to prey availability. Thus, reductions in moth abundance resulting from changes in precipitation or increased spraying for forest pests could negatively affect Townsend’s big-eared bat. In drier regions, periods of drought near maternity colonies could reduce reproductive output.

In addition, white-nose syndrome, an often-fatal fungal disease of hibernating bats, was first documented in King County, Washington in 2016. Since then, WDFW has confirmed over a 100 cases in different bat species in the state. The disease is caused by the fungus Pseudogymnoascus destructans, which attacks the skin of hibernating bats and damages their delicate wings, making it difficult to fly and affecting their ability to thermoregulate and have proper water balance during hibernation. This causes infected bats to rouse more frequently during hibernation and often leave too early from hibernation, resulting in losing their fat reserves and becoming dehydrated or starving to death. White-nose syndrome does not affect humans, livestock, or other wildlife. Learn more about white-nose syndrome in Washington.

WDFW also partners with U.S. Forest Service and other state, federal and tribal agencies, and non-governmental organizations to conduct counts at significant Townsend’s big-eared bat hibernacula that are located in caves. These data informed species trend and status assessments.

Townsend’s big-eared bat colonies are rare and poorly known, therefore there is a need to conduct a more thorough inventory of roosts sites, particularly maternity colonies and hibernacula, that way to ensure they are properly protected.

WDFW has a special online reporting tool for the public to report suspected white-nose syndrome in bats as well as a tool to report bat colonies (groups of bats). New significant roosts have been located for this species through these efforts.

Bats don't present a problem for most people. For others, bats can be a worry, especially when they become unwanted guests in an attic, inside a wall of a home, or inside the home itself.

Unlike rodents, bats only have small teeth for eating insects, so they do not gnaw holes in walls, shred material for nests, chew electrical wiring, or cause structural damage to buildings. Damage caused by bats is usually minimal, but they can be noisy and alarming, and the smell of bats and their droppings can be offensive. It is possible to learn to coexist with bats, and to benefit from their presence.​

As predators of night-flying insects, bats play an important ecological role in preserving the natural balance of your property or neighborhood. Washington is home to 15 bat species that benefit humans by eating tons of insects that can negatively affect forest health, commercial crops, and human health and well-being.

Learn more on our Living with Wildlife: Bats webpage.