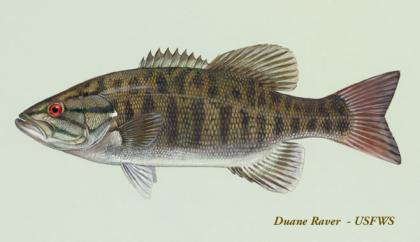 Smallmouth bass are one of two species of black bass in Washington with the other being the more popular and widely distributed largemouth bass.  Although smallmouth bass are not as popular or widely distributed as their genus mate, their popularity is increasing steadily. The common name smallmouth bass is appropriate given that their mouths are considerably smaller than those of the largemouth bass (the maxillary bone usually does not extend past the center of the eye). The spiny and soft-rayed parts of the dorsal fin are continuous. Although coloration varies significantly with water clarity and habitat, smallmouth bass are mottled with dark vertical bars; largemouth bass have a singular longitudinal stripe running the length of the body.  In less productive, clear waters such as Lake Chelan, these dark vertical bars will be very pronounced. In more productive waters such as Potholes or Moses Lake, they will appear yellowish brown in color (hence the name bronzeback) with the vertical barring less distinct. Average 12-16 inches. Smallmouth bass can grow 16-24 inches in quality populations.

Fishing improves throughout the spring as waters warm and fish move onshore, peaking during the spawn. Summer is a slight lull though dawn/dusk hours can be very good. Catch improves in Fall as waters cool, vegetation begins to die back, and prey becomes more available. Winter is the hardest time because fish are offshore and slow moving.

Although smallmouth bass make excellent table fare, most anglers in Washington pursue smallmouth bass for sport.   Experienced bass anglers agree that pound-for-pound; smallmouth bass are stronger and more acrobatic fighters than most freshwater sport fish.   Several powerful surges towards the bottom or jumps at the surface are common, and many anglers are fooled into thinking a much larger fish is on the line.   Rule of thumb: the warmer the water, the better the fight.   Add in the element of a strong current and smallmouth quickly become a challenge to get to the net.

Though smallmouth bass can be caught throughout the year, fishing success increases dramatically in the spring as waters temperatures rise and food becomes increasingly available.   During this transition period, reaction baits such as crankbaits and suspending jerkbaits can be very effective for coaxing lethargic bass to bite.   As waters approach 55-60 °F in May, smallmouth bass become increasingly active as they prepare to spawn. In rivers, large spawning adults are on the move, staging along current seams near shallow gravel flats.   Current breaks created at the heads and tails of islands are good bets. In lakes, smallmouth bass also seek shallow, flat, gravel bottom for spawning, but relate more to structure (large rocky substrate, docks) than current breaks to ambush prey. In both instances, hard baits (crank baits, jerkbaits, spinnerbaits) and soft baits (grubs on a football head jig, finesse worms rigged drop shot) can be effective depending on the location and how the fish are relating to available cover.

Spawning occurs as temperatures reach 60 °F in late May and June.   Male smallmouth bass build nests (beds) to attract females and together they spawn over gravel substrate in 5-20 feet of water, depending on water clarity.   Spawning adults will aggressively defend their nests from any intruders, including soft plastic baits, but you will need some patience and experience on the water to locate nesting sites.   They are generally found just deep enough that spotting them can be difficult, especially on an overcast day.

As summer progresses and lakes become thermally stratified, smallmouth bass will spend much of the day resting on the bottom below the thermocline (barrier between warm and cool water) in 20 to 30 feet of water.   In most lakes, smallmouth will congregate in areas of large, rocky substrate where their favorite food, the signal crawfish, is abundant.   Dragging soft plastics and drop-shotting finesse worms on the bottom are the primary methods of choice.   During low light periods between dawn and dusk, smallmouth will venture into the shallows to hunt for food.   In early morning and late evening, a variety of shallow diving or surface baits will work; favorites include spinnerbaits, soft jerkbaits, and poppers.   Time periods when topwater is effective can be very short, especially when targeting larger fish, but the surface explosion of a lunker smallmouth is worth the effort.   Though most anglers key in on larger fish, 100 fish days are not uncommon on the Snake River during the summer. The majority of these fish will be 8-12 inches, but they will fight over a topwater plug all day long, making for great fun for the kids.

Fall is another transitional period as temperatures fall, food becomes increasingly scarce, and predatory fish like smallmouth look to pack on fat reserves for the winter.   Many of the tactics used during the summer carry over to the fall, including bottom fishing soft plastics during the day and fishing reaction baits near the surface during low light periods.   As winter approaches, smallmouth will seek out deeper water (>30 feet deep in many lakes) and become increasingly inactive and difficult to catch.