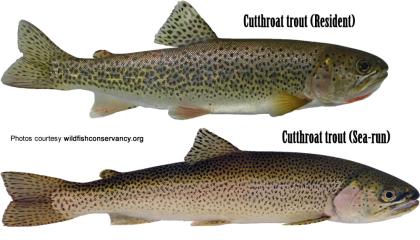 Resident coastal cutthroat trout are one of three subspecies of cutthroat trout that occur in Washington and one of the two that are native. The other native is the westslope. There is also an anadromous, or ‘sea-run’ coastal cutthroat. The coastals have dark green backs with olive sides and silver bellies along with numerous irregular spotting over their entire body, including below the lateral line. Resident cutthroat trout can be mistaken for rainbow trout, but they have two distinguishing features that rainbow do not: the underside of the cutthroat’s lower jaw has red slash marks on each side (where it gets its name from) and small teeth on the back of the tongue. The cutthroat's upper jaw also extends past the back edge of the eye, where is does not in rainbow (except for rainbow over 20 inches).Average 7-9 inches. Coastal cutthroat can grow to 10-18 inches in quality populations.

Washington anglers must have an annual freshwater license if you are fishing in rivers, streams and lakes, while a saltwater license is necessary to fish in marine waters. A combination fishing license allows anglers to fish in both freshwater and saltwater. Licenses can be purchased online; by telephone at 1-866-246-9453; or at hundreds of license dealers across the state.

Information on fishing regulations and seasons is available in the sportfishing rule pamphlet and the Fish Washington app, which conveys up-to-the-minute fishing rules for every lake, river, stream and marine area in the state.

Resident coastal cutthroat trout are widely distributed throughout western Washington (west of the Cascades). They are also present in lakes, along with tributaries to the Strait of Juan de Fuca, Hood Canal, Puget Sound, coastal streams, and in tributaries of the lower Columbia River. Although a resident cutthroat trout may be found throughout a stream, the majority of them are found in small headwater streams above impassable barriers.

Fishing is best for Coastal Cutthroat in the spring and fall. There is a summer lull as fish move offshore into deeper waters to escape the summer heat in July and August. Catch is lowest in the late-winter while adults are spawning in tributary streams.

Resident cutthroat trout are aggressive and opportunistic feeders, preying on insects, leeches, crustaceans, and fish.  They prefer to occupy deep pools or locations along lake shorelines, especially where there is an abundant amount of submerged debris.  Stillfishing and trolling are two popular methods used to fish for resident coastal cutthroat trout.  In addition to bait, resident coastal cutthroat trout can be caught using a wide variety of artificial lures and flies.  Popular spinner and spoon brands are Blue Fox, Vibrax, Mepps, Triple Teasers, Little Cleo, and Flafishes.  Fly fishers will want to "match the hatch" and some popular types of fly patterns are nymphs, streamers, and dry flies.  As the water temperature warms up during the summer, the fish will be found closer to the bottom.

As with any species, before beginning your fishing trip for resident coastal cutthroat trout, you will want to check the regulations for the location you will fish.  Many streams in the Puget Sound region are closed to fishing unless stated otherwise in the regulations pamphlet.  There may also be some gear restrictions.