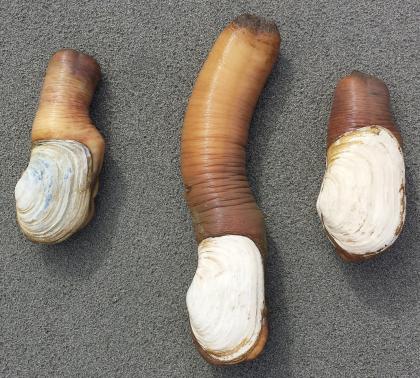 The most impressive clam in the Pacific Northwest is the geoduck. The world's largest burrowing clam, they are extremely abundant in the inland waters of Puget Sound, British Columbia and Alaska, where the subtidal populations support important commercial fisheries.
Geoduck are very popular targets for the recreational fishery but there is limited upland access to beaches that support intertidal populations of geoduck. Tides to harvest intertidal geoduck must be at least -2.0 foot or lower. Recreational harvesters may anticipate large crowds seeking geoduck when these low tides occur at popular state park locations.

The geoduck reaches an average size of 2.07 pounds (including the shell) in subtidal waters of Puget Sound (based on surveys of commercial beds before fishing). The average size of recreationally caught geoducks on intertidal public beaches in Puget Sound is 2.47 pounds. The largest geoduck ever weighed and verified by WDFW biologists was a 8.16-pound specimen dug near Adelma Beach in Discovery Bay in year 2000. Much larger specimens have been reported by commercial harvesters. Geoducks grow rapidly, generally reaching 1.5 pounds in three to five years. They attain their maximum size by about 15 years, and can live at least as long as 168 years.

Their range extends from Alaska to Baja California, but they are rarely found along the Pacific coast, and populations are likewise scarce west of Clallam Bay in the Strait of Juan de Fuca. Geoduck clams are found buried two to three feet deep in mud, sand, or gravel. The gaping, oblong shell is white with concentric rings, and generally has thin patches of flaky brown covering (periostracum) at the edges. The siphon and mantle are so large that they cannot be withdrawn into the shell.

Anyone digging for geoducks in Washington must have a valid license that includes shellfish harvest. See the sportfishing rule pamphlet for more information, or visit a license dealer.

Information on recreational shellfishing regulations is available in the sportfishing rule pamphlet. Clam seasons are beach specific and may change annually. Current seasons can be located at wdfw.wa.gov/places-to-go/shellfish-beaches or at https://fortress.wa.gov/doh/biotoxin/biotoxin.html .

A commercial geoduck fishery also exists; commercial geoduck clam harvest is managed in Washington by the state Department of Natural Resources. WDFW is responsible for biological management and enforcement of WDFW regulations of this valuable resource.

Natural "beds" of geoducks exist on many public beaches in Washington, but they will seldom be exposed except at tides lower than about -2.0 feet. Only Puget Sound and Hood Canal contain abundant populations of geoducks; they are rarely encountered on the Pacific coast beaches and west of Clallam Bay in the Strait of Juan de Fuca. The most popular geoduck beaches include:

Geoducks have been observed with underwater video cameras living as deep as 360 feet in Puget Sound, and the vast majority of the population is subtidal. They are not nearly as abundant intertidally, and sport diggers generally find them on beaches only at extreme low tides (lower than -2.0 feet). For this reason, most of the sport digging is restricted to less than 20 tides a year.

This species is identified as a Priority Species under WDFW's Priority Habitat and Species Program. Priority species require protective measures for their survival due to their population status, sensitivity to habitat alteration, and/or recreational, commercial, or tribal importance. The PHS program is the agency's main means of sharing fish and wildlife information with local governments, landowners, and others who use it to protect priority habitats for land use planning.
Also in this section
© 2023 All rights reserved.