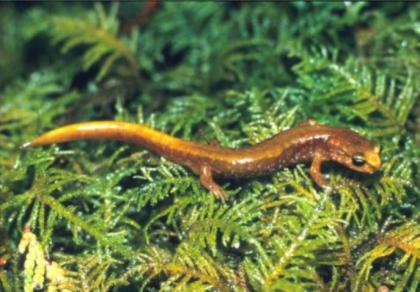 This salamander is at risk due to its limited distribution and apparently small, isolated populations. Its population trend is unknown.

Van Dyke's salamander is one of relatively few vertebrate species endemic to Washington.

These salamanders are lungless and depend on moist skin surfaces for oxygen uptake.

This species is a small, striped salamander, about 4 inches in length (about 2.5 inches from snout to vent). The color on the sides can be dark ("dark-phase"), dull yellow ("yellow-phase") or pinkish to red ("rose-phase") in adults. Collectively, the yellow- and red-phase (which may be difficult to distinguish) is known as "light-phase."

Juveniles are similar to adults but are always dark-phase, with a distinct yellow or reddish dorsal stripe.

The presence of nasolabial grooves (nose to mouth indentations) separates Lungless Salamanders from other types of salamanders.

Compared to our other woodland salamanders (Plethodon species), this species is relatively stocky and long legged. It has slightly webbed toes and inconspicuous parotoid glands. The costal groove count is usually 14. Sexual maturity is reached at about 1.8 inches snout to vent length.

The following traits separate the Van Dyke's salamander from the other woodland salamanders (Plethodon species) in Washington: 1) the dorsal stripe usually appears to have "drips" of the color extending partially down the sides, 2) the costal groove count is usually 14, and rarely 15, 3) there are 1 to 1/2 to 3 costal folds between adpressed limbs, 3) darker individuals and juveniles have a yellow throat patch, and 5) there are parotoid glands present. The parotoid glands and slightly webbed toes may not be obvious to the novice. The lack of a constriction at the base of the tail distinguishes stripeless Van Dyke's salamanders from ensatina (provided the ensatina does not have a regenerating tail).

Only six nests have been described. The eggs were laid in small clusters within cavities in decaying logs. Typical of woodland salamanders, a female attended the eggs until development was complete. There is no free-living larval period; eggs hatch into fully formed miniature salamanders.

Van Dyke's Salamander is usually associated with streams, seepages, and rock outcrops. It has been associated with habitats that maintain cool temperature and moist conditions. Large decaying conifer logs near streams appear to be important habitat for nests.

In coastal areas, it is often most abundant in old forest stands that have complex stand structure and moderate to high levels of woody debris and colluvial rock present.

It has also been reported from forested talus, upland sites, and in cave entrances. Interestingly, small populations survived in the Mount Saint Helens' blast zone; these were probably protected by their subterranean refugia and heavy snowpack.

Most surface activity takes place in the spring after snowmelt and before summer drought and in the fall after the onset of fall rains and before temperatures approach freezing. More specifically, most surface activity occurs when soil moisture is high (moist or wet) and soil temperatures are between 39 to 57˚F. Because this species may occupy wet habitats, it is sometimes active on the surface even in the summer.

Nests found on the Olympic Peninsula (elevations below 2300 feet) were laid in early May and development was completed by early October. Females brood and guard the eggs during the summer. One nest was under a moss-covered stone; a grape-like cluster of eggs were attached to the stone by a single gelatinous thread. Another clutch was found in a moist, partially rotted log along a stream in old-growth forest (western red-cedar/Douglasfir/western hemlock/grand fir) in Washington. There is no larval stage; hatchlings emerge as juvenile salamanders.

The Van Dyke's salamander is endemic to Washington State. They occur in three disjunct areas in the Willapa Hills, on the Olympic Peninsula, and in the southern Cascade Ranges. These areas are separated by glacial and alluvial deposits that may limit regional distribution. They generally occur in small isolated populations.

This map from the Washington Herp Atlas illustrates the distribution of Van Dyke's salamander in Washington based on records in the WDFW database as of 2016. If you see this species in areas that are not indicated on the map or have more recent observations (less than 10 years), please share your observation using the WDFW wildlife reporting form.

For a map of conservation status of this species, see NatureServe Explorer.

Van Dyke's salamanders, as the coolest adapted of all terrestrial salamanders in western North America, are physiologically sensitive to heat and desiccation; this sensitivity to temperature and moisture changes is driven by respiration requirements (i.e., depend on moist skin surfaces for oxygen uptake), although they can behaviorally regulate exposure by moving underground during times of higher temperatures and less precipitation. However, behavioral regulation of exposure may force longer intervals of seasonal and diel subterranean activity under a climate change regime, the consequences of which are uncertain. Sensitivity of this species is further increased due to their habitat requirements (i.e., cool, forested streams). Changes in hydrology (e.g., declines in snowpack or precipitation) that reduce seeps, and springs, and stream proximate riparian habitat could negatively impact this species.

See the Climate vulnerability section for more information on threats posed by climate change to this species.