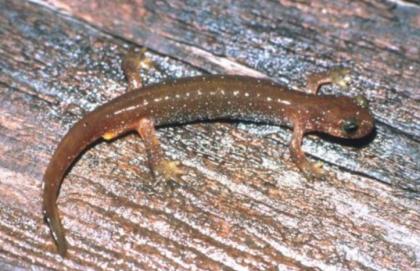 Conservation concerns for this salamander in Washington are based on its small global range and narrow environmental requirements. They are temperature-sensitive species with limited dispersal ability.

Occurrence of Olympic torrent salamanders in landscapes with more intact, mature habitat with legacy structures (such as coarse woody debris) will likely be buffered by some impacts of climate change. Most known occurrences (77 percent) are within Olympic National Park, with an additional 15 percent of locations on the Olympic National Forest. National forest occurrences are within late-successional reserves and adaptive management areas that provide some level of riparian habitat protection.

The Olympic torrent salamander is a small, aquatic, stream-adapted salamander (less than 2.4 inches snout to vent length). The head is small with a short rounded. The body is relatively long with short limbs and a short tail. Coloration is brown above and yellow to orange-yellow below. White speckling on the body tends to be more concentrated on the sides. This species generally lacks dark dorsal (topside) spotting or blotching, but may have ventral (underside) spotting.

The larvae have greatly reduced gills and tail fins, well-developed functional limbs, prominent dorsally positioned eyes that do not greatly protrude, and a white (young larvae) to yellow-orange belly.

Eggs have not been found in the wild, suggesting that females hide them well, perhaps in fractured rock or deep in springs. As in other members of the genus, the eggs are thought to be unpigmented, laid singly, and unattached to the substrate.

Olympic torrent salamander occur in mature coniferous forests where they inhabit cold, permanent streams, seepages, and waterfall splash zones. Stream segments tend to be shallow and slow flowing, and have gravel or rock rubble with low levels of silt. Olympic torrent salamanders tend to be more abundant in streams with north aspects, steep gradients, and cobble substrates. Spaces between rocks are used for cover.

Olympic torrent salamanders are active year round, and the mating season is probably prolonged. No nests have been found, presumably because eggs are laid in inaccessible recesses in head-water streams and seeps.

Clutch number is also unknown, but is likely small (eight or fewer eggs). The incubation and larval periods are long (seven to nine months and more than two years respectively).

They are opportunistic predators on invertebrates. They are desiccation intolerant, have highly reduced lungs, and depend on skin surfaces for oxygen intake. Individuals are sedentary, with movements limited to several meters or fewer.

Olympic torrent salamanders are native to the Olympic Peninsula, and distribution within the range is patchy. The species was found to be widespread within Olympic National Park where surveys found it in 41 percent of 168 streams and 47 percent of 235 seeps.

This map from the Washington Herp Atlas illustrates the distribution of Olympic torrent salamander in Washington based on records in the WDFW database as of 2016. If you see this species in areas that are not indicated on the map or have more recent observations (less than 10 years), please share your observation using the WDFW wildlife reporting form.

Overall sensitivity of this species is likely moderate desiccation, it typically never exposures itself to conditions where that senstivity might place it at risk. It is an aquatic habitat specialist that deposits unattached eggs in concealed, often colluvially affected locations, hence, is typically found in low-order headwater streams, seeps and springs. Increasing water temperatures will negatively impact this species as it cannot survive where water temperatures are too high. Reduced snowpack and shifts from snow to rain that lead to more frequent high flow events, erosion and scouring that could make its breeding habitat riskier or actually reduce headwater riparian habitat for the Olympic torrent salamander.

Adams, M. J. and R. B. Bury. 2002. The endemic headwater stream amphibians of the American Northwest: associations with environmental gradients in a large forested preserve. Global Ecology and Biogeography 11:169–178