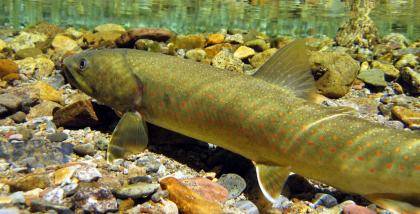 Bull trout (Eric Anderson)
Category: Fish
Ecosystems: Marine shorelines
State status: Candidate
Federal status: Threatened
Populations of this species
If you see this species, please share your observation using the WDFW wildlife reporting form. Providing detailed information such as a photo and exact coordinates will improve the confidence and value of this observation to WDFW species conservation and management.

Even though bull trout are classified as a game fish in Washington most of their populations across the state are listed as "threatened" by the federal Endangered Species Act and therefore they cannot be fished for or kept if accidently caught while fishing. If an angler catches a bull trout in a water closed for bull trout fishing, they must not be taken out of the water. They must be de-hooked and immediately released.

Even though they are called a trout, bull trout are actually a char, closely related to lake trout and brook trout rather than rainbow or cutthroat trout. Also, like lake trout and brook trout their most obvious distinctive feature is light spots on a dark background, unlike rainbow and cutthroat that have dark spots on a lighter background. If an angler is fishing in waters containing bull trout, it is his or her responsibility to be able to identify bull trout and release them immediately, unharmed, if one is accidently caught on hook and line. Their back and sides are olive-green with pale spots about the size of the pupil of their eye. The head and mouth are unusually large and their ventral fins have white leading edges.

Bull trout have different life histories that can vary by individual population. Some spend their entire lives in small streams and their size remains small. Some migrate from small streams to larger rivers and back again to the stream to spawn. Those fish are generally larger. Some migrate into lakes or reservoirs then back to their natal stream or river to spawn. The varying life histories have an influence on maximum size, from 10 to 12 inches to over 30 inches and many pounds in weight.

Bull trout are predacious fish and are generally aggressive and will take a variety of artificial lures or flies that resemble fish; spoons, rapalas, etc.   Since the only waters in the state that are open to bull trout fishing are rivers, casting would be the technique of choice.

Bull trout prefer cold, well-oxygenated water, but again, legal angling for them is only in the above-mentioned rivers in the specific reaches described in the regulations pamphlet.

Remember, when handling any fish you intend to release, wet your hands first so you don't take off the fish's protective slippery coating.   Dry hands will remove the protective coating and make the fish vulnerable to bacterial or fungal infections, which can kill them.

This species is identified as a Species of Greatest Conservation Need (SGCN) under the State Wildlife Action Plan (SWAP). SGCN-classified species include both those with and without legal protection status under the Federal or State Endangered Species programs, as well as game species with low populations. The WDFW SWAP is part of a nationwide effort by all 50 states and five U.S. territories to develop conservation action plans for fish, wildlife and their natural habitats—identifying opportunities for species' recovery before they are imperiled and more limited.
This species is identified as a Priority Species under WDFW's Priority Habitat and Species Program. Priority species require protective measures for their survival due to their population status, sensitivity to habitat alteration, and/or recreational, commercial, or tribal importance. The PHS program is the agency's main means of sharing fish and wildlife information with local governments, landowners, and others who use it to protect priority habitats for land use planning.
Also in this section
© 2023 All rights reserved.