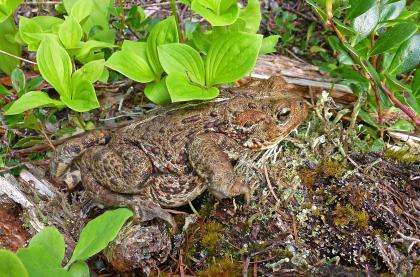 Adult western toads have a stout, "warty" body with a thin light stripe down their back. 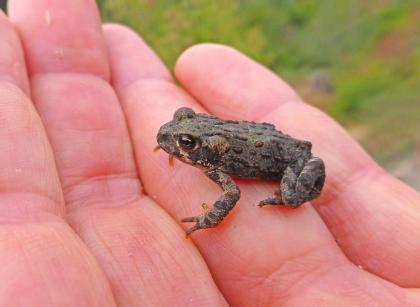 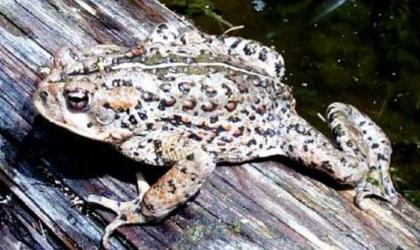 This toad’s population is unknown in the Puget Sound lowland and in lower Columbia River below the Bonneville Dam; only 19 out of 107 historical sites in these areas that remain, however, the species is locally common elsewhere in Washington.

This is a medium-sized to large toad with a blunt head, stout body, broad waist, short legs, and “warty” skin. Adults range in size from 2 to 5 inches in length. Females attain larger sizes than males. Prominent oval glands (parotoid glands) are present on the head behind the eyes. The dorsal (topside) of the body may be brown, green, olive, gray, or reddish-brown. The warts are usually surrounded by dark blotches and may be reddish. A distinct, thin, light stripe runs along the middle of the back from top of the head to the rear end. The underside is light with irregularly distributed dark markings. The pupil of the eye is horizontal oval.

During the breeding season, males develop a smoother skin than females.

Presence of parotoid glands distinguishes True Toads (Bufonidae) from all other frogs. In comparison with western toads, Woodhouse’s toads (Bufo woodhousii) have elongate parotoid glands that are distinctly longer than the eye and have “L”-shaped cranial crests located between and posterior to the eyes.

The tadpole is uniformly dark and appears black in water. Varying degrees of fine lighter flecking are present on the body. The body is dorsally flattened with a low tail fin that originates at the dorsal tail-body junction. The eyes are dorsally situated relatively high on the head. The spiracle is on the left side of the body and the vent is medial at the tail-body juncture. The tail musculature is dark, and the fins are slightly pigmented with the dorsal fin darker than the ventral. The tail tip is rounded. The underside of the body is slightly paler than the dorsal surface. The fine lighter flecking on larger tadpoles gives them a fine golden shimmer over the belly when viewed in bright light. Tadpoles grow to approximately 2 inches total length. The tadpoles form dense aggregations or “schools” composed of thousands of individuals that consist of kin groups (siblings from the same clutch).

The tadpoles of both western and Woodhouse’s toad species are similar, but Woodhouse’s toad tadpoles have patches of white and gold pigment on the body and the underside of the tail musculature and the tail fin lacks pigment except for some dark flecking.

The eggs are laid in long strings on bare sediments or intertwined in vegetation in shallow water near shore. Individual females produce approximately 12,000 eggs per clutch on average (estimated counts range 6,000 to 20,000). Toads have been observed to wrap their eggs around vegetation in deeper water (greater than 3 feet) away from shore, but this is not typical.

The egg strings are similar to Woodhouse’s toads but the latter has only one gel layer.

The adult western toad emits a mellow chirruping or soft, high pitched plinking sound like the peeping of a chick. These vocalizations are produced with notes in rapid succession. Multiple males vocalizing at the same time sound rather like a distant flock of cackling Canada geese. Vocalizations are produced day and night. One must be relatively close (less than 100 feet) to hear them. Both males and spent females give a “release call” when grabbed by an indiscriminate male or when handled by humans. This call is a rapid chirping accompanied by a pulsing of the body. Listen to the calls of western toad in this short video clip.

In comparison, the call of Woodhouse’s toads is a loud, explosive “w-a-a-a-a-ah” lasting about 1 to 1 1/2 seconds

This species occurs in a variety of terrestrial habitats including prairies, forests, canyon grasslands and ponderosa pine-Oregon oak habitat. They appear absent from most of the shrubsteppe and steppe zones with the exception of the canyon grasslands in southeast Washington. Breeding waters are usually permanent and include wetlands, ponds, lakes, reservoir coves and the still-water off-channel habitats of rivers, as well as river edges.

In lowland western Washington, individual toads have been found in mid-February within duff under sword ferns suggesting that some individuals overwinter terrestrially in areas with mild winters or at least occur terrestrially during the mild portions of winters.

Toads breed in the still waters of lakes and ponds, but they also breed within slower moving sections of rivers. Onset of egg laying at each location varies from one to three weeks each year depending on site conditions such as snow melt.

Tadpole development to metamorphosis takes approximately two months depending on temperature and food availability. Watch this amazing underwater footage of masses of western toad tadpoles during their aquatic journey and metamorphosis into toadlets.

The newly metamorphosed toads disperse from the breeding sites in groups for 1 to 2 weeks. Informal observations indicate that many populations return to the same breeding location each year. Transformed toads are primarily terrestrial, but often occur near water bodies, especially in drier climates.

Western toads can produce a poisonous substance from their skin, which helps protect them from predators.

Western toads occur in all nine Washington ecoregions: Northwest Coast, West Cascades, Puget Trough, North Cascades, Columbia Plateau, Okanogan, East Cascades, Canadian Rocky Mountains, and Blue Mountains. Ecoregions are broad areas that share similar flora and fauna, geology, hydrology, and landforms. Within the Washington portion of the Columbia Plateau, the species’ distribution is limited to the edges of the ecoregion except in the southeast corner of the state. The toads are locally abundant in some areas, but local declines have been documented in others.

This map from the Washington Herp Atlas illustrates the distribution of western toad in Washington based on records in the WDFW database as of 2016. If you see this species in areas that are not indicated on the map or have more recent observations (less than 10 years), please share your observation using the WDFW wildlife reporting form.

Sensitivity of the western toad to climate change is primarily driven by its dependence on intermittent and permanent aquatic habitats (e.g., streams, seeps, wetlands, ponds, etc.) that may be lost or degraded due to changes in precipitation and altered hydrology. A significant portion of western toad breeding in western Washington occurs in low-gradient portions of rivers, such as the Chehalis and its tributaries, after the hydrographs have dropped to a level that is unlikely to risk scouring their unattached eggs. Greater, more variable, and episodic rainfall (all current predictions of climate change in the PNW) are likely to put these river-breeding populations at risk. High-elevation populations may be at risk because of reduced hydroperiods in breeding habitat that result either in reproductive failure or eliminate that ability of a significant portion of annual cohorts to reach metamorphosis. Desiccation of streams and pools along dispersal routes may create barriers to movement. Synergistic impacts such as climate changes combined with disease outbreaks increases sensitivity of this species. Physiological sensitivity of this species is unclear - some references cite sensitivities to temperature and moisture conditions while others cite high adaptability to changes in these conditions.

WDFW participated in the Washington Wildlife Habitat Connectivity Working Group, formed in 2007, whose mission was to promote the long-term viability of wildlife populations in Washington State through a science-based, collaborative approach that identified opportunities and priorities to conserve and restore habitat connectivity.  Other participants were:

This working group initiated the Washington Connected Landscapes Project, which provided a systematic approach with multiple components and a sustained effort to support the group’s mission. They produced a statewide analysis, published in 2010. This analysis quantified current connectivity patterns at three different spatial scales for Washington State and neighboring areas in British Columbia, Idaho, and Oregon.

Assessing the current condition of wildlife habitat connectivity in the state was an important step for connectivity conservation. Animals move across landscapes to find food and other resources, migrate between seasonal habitats, find mates, and shift to new habitats in response to environmental changes. The ability to successfully move between habitats is essential for the long-term survival of many wildlife species, from large, migratory species such as elk and mule deer, to smaller animals like white-tailed jackrabbits, greater sage-grouse, and western toads.

Focal wildlife species were selected using criteria designed to favor species with geographic ranges, habitat associations, and vulnerabilities to human-created barriers that made them representative of the habitat connectivity needs of many terrestrial species at a statewide scale. Western toads were selected as a focal species because they were a good representative of habitat connectivity needs of wildlife with similar life history needs in the three forest vegetation classes (Rocky Mountain, Vancouverian, and Subalpine Forests). In addition, the toads‘ broad coverage across the landscape, reliance on connectivity between populations, and in particular, their association with wetlands and aquatic systems led to inclusion in the statewide analysis. Check out the analysis for more details.

Maxell, B. A., K. J. Nelson and S. Browder. 2002. Record clutch size and observations on breeding and development of the Western Toad (Bufo boreas) in Montana. Northwestern Naturalist 83:27-30.