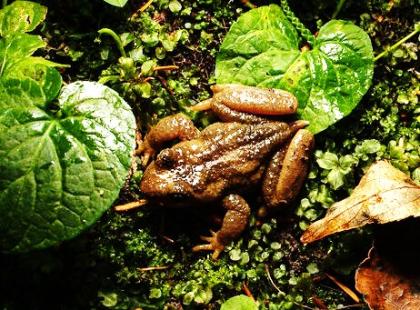 In Washington, populations of these frogs are found only in the Blue Mountains, in the southeastern part of the state. The frog is vulnerable to management practices that alter the riparian or aquatic zones of streams.

The Rocky Mountain tailed frog is a moderately small, slender-bodied frog with rough skin. Snout to vent length is from 1.5 to 2 inches. The head is relatively large, flattened, and slightly broader than it is long. The snout is relatively short and tapers forward from the eyes. The pupil is vertical. An eye-stripe extends from the snout to the shoulder. The feet are slightly webbed, and the outer two hind toes are flattened. The dorsal (topside) color of the frog usually matches the substrate of the frog's habitat. The males have a tail-like copulatory organ, tubercles on the palm and forearm and, during the breeding season, small dark pads on the sides of the abdomen.

The tail appendage of the male is unique among anurans. Rocky Mountain tailed frogs look similar to Pacific treefrogs, but treefrogs have horizontal pupils, circular discs (“toe-pads”) at the tips of their fingers and toes, rounded (rather than flattened) 4th and 5th toes on their hind feet, and typically lighter, brighter ground coloration (often light browns and greens).

Great Basin spadefoots have vertical pupils (the only other Washington anuran that does) but they are typically found only in arid habitats and have black spades on the underside of their rear feet.

Tailed frogs (both Coastal and Rocky Mountain taxa) have the only tadpoles in Washington able to adhere to rocks in fast-flowing streams with a large sucker-like mouth.

The Rocky Mountain tailed frog tadpole has a somewhat flattened body with dorsal eyes, a ventral suctorial oral disc (mouth) and a low fin that originates at the dorsal tail-body junction. The oral disc covers about one third of the lower body surface. The tip of the tail is broadly rounded and typically has a white spot bordered by black. The spiracle is located on mid-belly (midventral) and the nostrils are located closer to the eyes than the snout.

The eggs are unpigmented, deposited in strings of 40 to 80 eggs and attached to the undersides of rocks in cool flowing steams.

No vocalizations have been documented. Moreover, Rocky Mountain tailed frogs lack some of the structures used to make sounds (tongue and vocal sacs) found in other frogs.

Rocky Mountain tailed frogs are present year-round in and near perennial streams associated with cold, clear, rocky streams in mature forests. All life stages are adapted for life in fast-flowing streams. During wet weather, adults and juveniles may move into upland habitat adjacent to the stream.

A study in Idaho found tailed frogs persisted in streams that occurred in burned forest and post-burn regenerated forest showing that under certain conditions, tailed frogs can be resilient to physical stream changes resulting from natural disturbance. This included persisting in water much warmer than previously reported in the field.

These frogs are generally active at night, but tadpoles and frogs can also be observed during the day. They are most active from April to October, but this varies by site and conditions.

The male’s “tail” is used for internal fertilization, which prevents sperm from being washed away. Eggs are attached to the undersides of rocks to keep them in place. The tadpoles have a large sucker-like mouth that allows them to feed and move in high-energy streams without losing contact and unintentionally drifting.

In Washington, populations are found only in the Blue Mountains. The Washington Department of Fish and Wildlife database contains 229 observation records reported from 1997 to 2010. The occupied area is small and little is known about population size, habitat conditions or threats.

This map from the Washington Herp Atlas illustrates the distribution of Rocky Mountain tailed frog in Washington based on records in the WDFW database as of 2016. If you see this species in areas that are not indicated on the map or have more recent observations (less than 10 years), please share your observation using the WDFW wildlife reporting form.

Dunham, J. B., A. E. Rosenberger, C. H. Luce, and B. E. Rieman. 2007. Influences of wildfire and channel reorganization on spatial and temporal variation in stream temperature and the distribution of fish and amphibians. Ecosystems 10(2):335-346