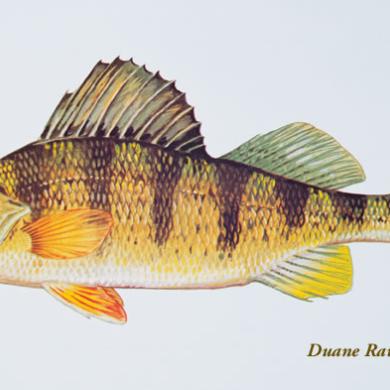 Yellow perch is one of several "panfish" species in Washington which is very popular across the state because they are easy to catch, they are a great "family fishing activity" and they are outstanding eating quality.  Yellow perch are easily identified by the golden-yellow coloration on their sides from which they get their most familiar common name as well as their scientific name, flavescens (yellow). The intensity of color may vary with age and with water clarity. Young perch and those found in clear lakes tend to have less yellow coloration. The common names "striped" and "ringed" perch come from another distinguishing feature, the six to eight broad, dark vertical bands running along their sides. The bands extend over their backs and end near their white belly.  The other member of the perch family in Washington is walleye, also an extremely popular game fish.Average 7-10 inches. Yellow perch can grow to 10-14 inches in quality waters.

Yellow Perch can be caught year-round. Fishing is best in the summer after they finish spawning in April-May. Fish can be readily angled through the summer from both the shore and boat. Catch begins to decline in the fall as water temperatures cool and fish move offshore forcing anglers to pursue them in boats. Successful fishing for Yellow Perch in the winter involves either targeting schools in deep water from boats or through the ice.

Because of their extremely high reproductive potential and early sexual maturity, the most productive perch fisheries are usually found in larger lakes or reservoirs, and many smaller lakes and ponds eventually become overpopulated.   Some anglers claim yellow perch are so willing to be caught that they will bite a bare hook.   You are more likely to be successful if you add a worm to the hook.  Other common options for catching perch include small jigs and lures tipped with maggots, wax worms, shrimp, or small pieces of perch meat.   Perch are notorious bait thieves, and once you've found a school, be sure to allow time for them to nibble so you don't pull up a bare hook.

Although most anglers agree yellow perch are a reliable catch, there is a trick to consistently catching large fish.   Yellow perch move in schools searching for food, and though they can be found at various depths, they tend to feed near the bottom.  The successful angler should also move around in search of them, starting near the bottom and working towards the surface before moving to a new location.   Schools of perch are commonly found at or near drop-offs between the littoral zone and deeper water. Once you find a school of perch, anchor, and continue to fish that location.

Tackle may be as simple as a small graphite rod with an open faced spinning reel, the more sensitive the better. Use small, fine hooks or jigs with bait and a small bobber with just enough buoyancy to signal even the lightest bites.   Yellow perch are active throughout the year, making them a favorite target of anglers. During winter, perch often move to deeper waters, feeding exclusively off the bottom. On some lakes, anglers fish in 20 to 50 feet of water to catch yellow perch in the winter.   Ice anglers fish for perch with short jig poles, some with specialized spools only large enough to accommodate 50 to 60 feet of line.