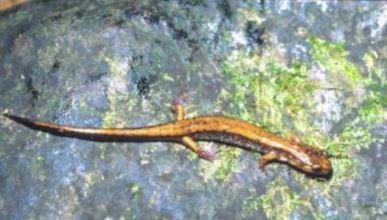 Dunn's salamander may have a tan, yellow, or green stripe with dark blotches the color of its sides. (William Leonard) 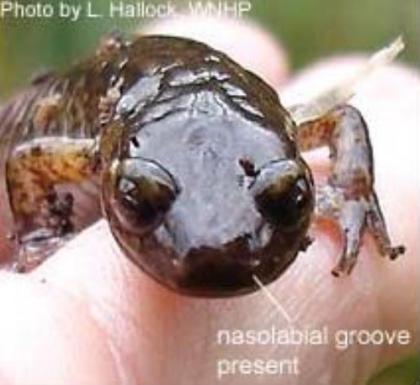 This salamander’s status is of concern in Washington based on the species’ small state range, narrow environmental requirements, a need for retention of large woody debris, and riparian habitats that are not fully protected.

This is Washington's largest woodland salamander, reaching sizes of 2.5 to 3 inches from snout to vent and 5.5 to 6 inches total length. It has a dorsal stripe that is tan, yellow, or green with dark blotches the same color as the sides of the salamander's dark (black or brown) body. Coloration in juveniles is similar but the dorsal stripe is distinctly brighter.

The presence of nasolabial grooves separates Plethodon species (Lungless Salamanders) from other types of salamanders. These woodland salamanders in Washington are similar in general appearance to each other.

The following traits distinguish the Dunn's salamander: 1) the dorsal stripe of large juveniles and adults does not extend to the tip of the tail and has an uneven, "eroding" edge that is invaded by blotches of the side color, 2) the sides of the body have patchy blotches and flecks similar in color to the dorsal stripe, 3) the costal groove count is usually 15 with 2.5 to 4.0 intercostal folds between adpressed limbs.

Contrary to the common name, the western red-backed salamander (Plethodon vehiculum) often has a yellow or tan dorsal stripe. In the Willapa Hills, it is common to find individuals with black pigment invading the dorsal (topside) stripe (melanism) resulting in a dorsal stripe that may be absent, fragmented, and/or does not extend to the tip of the tail. Unlike the Dunn's salamander, however, western red-backed salamanders do not have blotches and flecks of the stripe color on the sides of the body.

The long-toed salamander has a similar color pattern, but lacks the nasolabial grooves unique to Lungless Salamanders, has a rounded snout and the fourth hind toes are noticeably longer than the rest of the toes.

Eggs are laid in clusters (four to fifteen) on dry land within moist areas of cover. There is no free-living larval stage. Hatchlings emerge as juvenile salamanders.

Dunn’s salamanders live in the shaded rocky edges of highly humid forested streams and moist talus (rock fragment piles). They prefer areas that are permanently moist but not in flowing water. Adults often hide under rocks, in splash zones near streams and occasionally under woody debris. This species has also been found upslope, away from stream channels. They may wander on the forest floor during rainy nights in the wet season, seeking cover in moist microhabitats such as forest duff or downed wood during the day.

All life stages are terrestrial. They require moist conditions and, therefore, most surface activity takes place in the spring and fall when temperatures are above freezing.

Dunn's salamanders lay their eggs in clusters on dry land within moist areas of cover such as in rotted logs or in crevices within wet, rocky areas. One nest was found in a decayed log next to a stream, with the female curled around nine eggs. Hatchlings emerge as juvenile salamanders.

This species is relatively rare in Washington. It occurs only in the Willapa Hills of the Olympic Physiographic Province. The range extends north to the Chehalis River and east to the Cowlitz River. This is the northern extreme of this species' range.

This map from the Washington Herp Atlas illustrates the distribution of Dunn's salamander in Washington based on records in the WDFW database as of 2016. If you see this species in areas that are not indicated on the map or have more recent observations (less than 10 years), please share your observation using the WDFW wildlife reporting form.

For a range-wide map and conservation status of this species, check out NatureServe Explorer.

Dunn's salamander is surface active a temperatures higher than its co-occurring lungless salamander congeners and its distribution going no further north than the Willapa Hills ecoregion partly reflects that. Few nest sites have been described, but the few found are concealed, so it likely that the few found represent the most accessible portion of typical nesting locations.