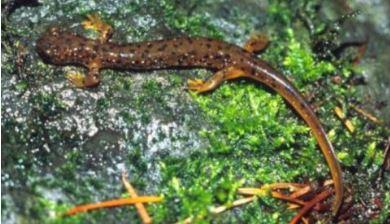 This salamander is sensitive to temperature variation and increased sedimentation that may be caused by disturbances, such as logging and road construction.

Some populations of Cascades torrent salamander are isolated by surrounding areas of unsuitable habitat and are vulnerable to extirpation through stochastic events exacerbated by habitat loss. Temperature sensitivity and limited dispersal ability makes this species potentially sensitive to climate change.

This is a small salamander that rarely exceeds 2.25 inches in length from snout to vent. The body is relatively long with short limbs and a short tail. The head is small with a short, rounded snout. Coloration is brown above and yellow to orange-yellow below. White speckling on the body appears mainly on the sides. Dark spots occur on the back and some on the belly. Varying amounts of dark dorsal spotting or mottling are a prominent feature of the color pattern, and a few black spots are often present on the belly.

Eggs have not been found in the wild, suggesting females hide them well, perhaps in fractured rock or deep in springs. As in other members of the genus, eggs are thought to be unpigmented, laid singly and not attached to the substrate.

This species is generally found in high-gradient, cold streams, seepages and waterfall splash zones, typically in areas with a thick canopy cover. Interestingly however, this species survived in many sites that were completely deforested by the 1980 eruption of Mount St. Helens. They usually occur in stream segments or off-channel habitats, such as seeps and waterfall splash zones, that are shallow, slow flowing and that have gravel or rock rubble that is silt-free. Adults are strongly associated with water and individuals are almost always found in contact with either free water or saturated substrates. During rainy wet periods individuals may be found in wet terrestrial forest settings away from streams or seepages.

Cascade torrent salamanders may be active year-round at lower elevations.

Breeding phenology is unknown, but may occur during most of the warmer months of the year. Eggs are most likely laid in the spring. The first described Cascade torrent salamander nest was found on 14 August 2003 in a second-order headwater stream on the west slope of the Cascade Mountains in Skamania County under a cobble-sized rock in the middle of a calm stretch of the stream channel 4 inches deep by 24 inches wide by 28 inches long. This differs from other Rhyacotriton species that are described as laying eggs in deep cracks and crevices of springs and seeps. The nest contained five eggs that were not attached to the substrate or each other.

The larval period is thought to be long; a Columbia Gorge population was estimated to require four to five years before metamorphosis.

In Washington, this species ranges from the west slopes of the Cascade Mountains south of Nisqually River to the Columbia River. Distribution is patchy. They can reach high densities in optimal habitat.

This map from the Washington Herp Atlas illustrates the distribution of Cascade torrent salamander in Washington based on records in the WDFW database as of 2016. If you see this species in areas that are not indicated on the map or have more recent observations (less than 10 years), please share your observation using the WDFW wildlife reporting form.

Cascade torrent salamanders are likely highly sensitive to climate change due to their deposition on unattached eggs in low flow habitats, their inability to tolerate desiccation and specialized habitat requirements. Declines in water availability and timing (e.g., due to reduced snowpack and earlier snow melt), as well as increased sedimentation (e.g., due to shifts from snow to rain), could decrease suitable headwater habitat for this species. Increases in the seasonal rainfall, especially that which results from extreme events from atmospheric rivers has the potential to blow out oviposition or rearing sites. This species may also be physiologically limited by high temperatures.