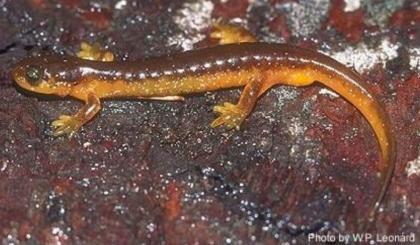 This salamander’s status is of concern in Washington based on the species’ small global range, narrow environmental requirements, and potentially unprotected headwater habitat.

The Columbia torrent salamander is a small, aquatic, stream-adapted salamander (rarely more than 2.2 inches snout to vent length). The head is small with a short, rounded snout The body is relatively long with short limbs and a short tail. Coloration is beige-brown above and yellow to orange yellow below. White speckling on the body tends to be more concentrated along the sides. Black speckling also exists, but is very reduced to fine flecking, also mostly along the sides. In general, this species lacks the dark dorsal (topside) and ventral (underside) spotting or blotching that is prominent in the Cascades torrent salamander.

The larvae have greatly reduced gills and tail fins, well-developed functional limbs, prominent dorsally positioned eyes that do not greatly protrude, and a white (young larvae) to yellow-orange belly.

The eggs are unpigmented, laid singly, and not attached to the substate. Females place the eggs in concealed locations (such as cracks in rocks) within relatively cold, low (trickling) flow water. More than one female may place eggs in the same area.

Columbia torrent salamanders occur in mature, coastal, coniferous forests where they inhabit relatively cold, permanent streams, seepages, and waterfall splash zones. Stream segments tend to be shallow, slow flowing, and have gravel or rock rubble with low levels of silt. They tend to be more abundant in streams with northerly aspects and steep gradients. During rainy wet periods, metamorphosed individuals may occasionally be found in wet terrestrial forest settings away from streams or seepages.

The salamanders are active year round, but the reproductive ecology is not well known. The mating season is probably prolonged similar to other torrent salamander species. Only five nests have been found, presumably because the eggs are laid in inaccessible recesses in head-water streams and seeps.

The situation regarding parental care and communal nesting is unclear. Both have been observed, but neither was consistent at the five described nests. The incubation period is long (seven to nine months), and the larval period is also long (more than two years).

Torrent salamanders are desiccation intolerant, have highly reduced lungs and consequently depend on skin surfaces for oxygen uptake.

Individuals are highly sedentary, with movements limited to 10 feet or less.

The Columbia torrent salamander is native to the coastal ranges of southwestern Washington and northwestern Oregon. Distribution in Washington is restricted to the Willapa Hills, and distribution within the range is patchy. They can be locally common in suitable habitat.

This map from the Washington Herp Atlas illustrates the distribution of Columbia torrent salamander in Washington based on records in the WDFW database as of 2016. If you see this species in areas that are not indicated on the map or have more recent observations (less than 10 years), please share your observation using the WDFW wildlife reporting form.

could decrease suitable headwater habitat for this species. This species can occur north-facing, steep slopes, which may reflect higher water temperatures and drier microclimates.