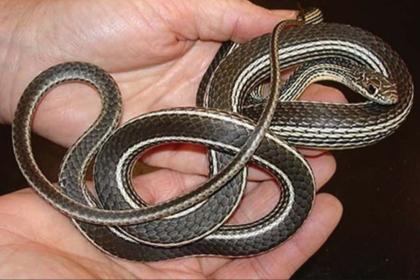 This is a subspecies of striped whipsnake. It is the state’s longest snake and one of its rarest, known only to exist in two areas in Grant County, Washington.

Some threats include conversion of habitat to agriculture, degradation of native shrubsteppe habitat from invasive weeds and other impacts, plus increasing vehicular traffic on roads and highways that bisect one of the last occupied areas.

This is a long, slender, striped non-venomous snake. Adults range in size from 30 to 72 inches total length. The belly is white and the underside of the tail is pinkish or coral colored. The eyes are large and the pupil is round.

The only other large striped snakes in Washington are the gartersnakes: common, northwestern, and terrestrial. The striped whipsnake differs from these in having smooth scales, 15 dorsal scale rows, and a dark mid-dorsal area between the lateral stripes.

For more details about the desert striped whipsnake, see the Washington Herp Atlas.

In Washington, striped whipsnakes are shrubsteppe obligates and occur primarily in the driest areas of the central Columbia Basin. Washington occurrences, historical and extant, are below 1,500 feet elevation. Most lands below this elevation in the Columbia Basin have been converted to agriculture or inundated by reservoirs for the Columbia Basin Irrigation Project. In addition, the habitat has been insidiously degraded by cheatgrass and other invasive weeds that have altered the understory of shrubsteppe habitat by colonizing the interspaces between native shrubs and perennial bunch grasses. This is particularly problematic for this active, visual predator, as well as the ground-dwelling lizards on which it preys.

The loss of lower shrub branches can be significant for striped whipsnakes and their lizard prey as shrubs without their lower branches do not provide the same cover from the heat or predators. This can occur from cattle grazing when cattle push their heads under shrubs to eat the grass under the shrub. The habitat of the two existing populations includes basalt outcrops with areas of high quality shrubland.

Striped whipsnakes use communal dens (i.e., hibernacula) in basalt outcroppings for winter dormancy. This species has high fidelity to hibernacula, returning each year to overwinter. Identification and protection of hibernacula sites is essential for conservation of this species.

In Washington, striped whipsnakes become surface active in March as soon as temperatures become suitable for activity, although they remain in the vicinity of the hibernacula until daytime temperatures are more consistently warm in April.

Breeding takes place after they emerge in the spring. Females lay eggs in July, and clutch sizes range from three to seven. The incubation period is 44 to 58 days. Striped whipsnakes are active during the day.

They are fast, visual, predators that actively chase down their prey. Small ground dwelling lizards, such as the side-blotched lizard, are the predominant prey, but small mammals, snakes, young birds, and insects are also eaten.

Striped whipsnakes reach the northern limit of their geographic range in Washington. Evidence indicates the species was never common in Washington and appears limited to the driest areas of the central Columbia Basin.

This map from the Washington Herp Atlas illustrates the distribution of desert striped whipsnake in Washington based on records in the WDFW database as of 2016. If you see this species in areas that are not indicated on the map or have more recent observations (less than 10 years), please share your observation using the WDFW wildlife reporting form.

For a map of range-wide distribution and conservation status of the striped whipsnake species (Coluber [Masticophis] taeniatus), check out NatureServe Explorer.

Overall, a lack of information exists regarding sensitivity of the striped whipsnake to climate change. Sensitivity of this species may be influenced by its occurrence in shrubsteppe habitats, which are sensitive to changes in precipitation, invasive weeds, and altered fire regimes. Striped whipsnakes appear to show some specificity for selected den sites, at least in some areas; unfortunately, the basis of that specificity is unclear, so linking it to potential changes in climate is uncertain. Striped whipsnakes are a largely saurophagous (lizard-consuming) species that in Washington are highly dependent on side-blotched lizards for prey in the only known populations remaining in the state. Hence, climate change impacting the side-blotched lizard could directly impact this species. In northern Utah, desert striped whipsnakes are locally heavily dependent on sagebrush lizards; if other populations of desert striped whipsnake exist in Washington State, they could be tied to favorable sagebrush lizard locations, so climate impacts on that species could also have impacts on this snake.

Whipsnakes are elusive and have proven difficult to find even where they are known to occur. Searching for shed skins eliminates many of the difficulties associated with finding the species. A corridor of native habitat supporting healthy lizard populations still remains between the two sites. WDFW continued to conduct these surveys annually at the occupied sites to monitor the populations. Numbers of shed skins found has remained small but relatively consistent from year to year, including the most recent surveys in 2012.

The Yakima Training Center (YTC) has provided shed skins to WDFW for identification. In 2012, WDFW surveyed an area on the YTC for the third time since 2006 that was known to have whipsnakes in the 1970s. Although the habitat appears suitable, none of the survey efforts resulted in evidence that whipsnakes still occur on the YTC. Shed skins from striped whipsnakes have been collected and stored since 2005 as vouchers for future genetic research. In 2010, researchers at the U.S. Geological Survey were able to isolate genetic material from a small sample of these shed skins.

Crother, B. I. (editor). 2017. Scientific and standard English names of amphibians and reptiles of North America north of Mexico, with comments regarding confidence in our understanding. 8th edition. SSAR Herpetological Circular 43:1-104. https://ssarherps.org/wp-content/uploads/2017/10/8th-Ed-2017-Scientific-and-Standard-English-Names.pdf [Updates in SSAR North American Species Names Database at: https://ssarherps.org/cndb]