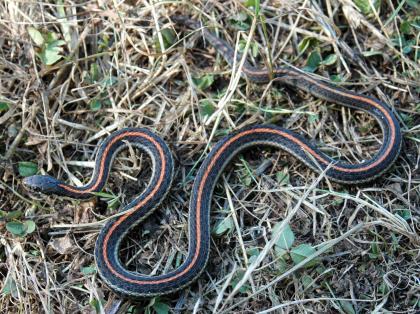 Stripe color is variable on northwestern gartersnakes
Category: Reptiles
Family: Colubridae
Ecosystems: Riparian areas
If you see this species, please share your observation using the WDFW wildlife reporting form. Providing detailed information such as a photo and exact coordinates will improve the confidence and value of this observation to WDFW species conservation and management.

This snake is common in western Washington. No declines have been reported at this time.

According to NatureServe, the state conservation status of the northwestern gartersnake population is considered “secure” in Washington.

The northwestern gartersnake is a small to medium-sized, brown or black snake with stripes. The head is relatively small in proportion to the body. Spots may also be present. Typically, three stripes are present; a thin vertebral (back) stripe and two thin lateral (side) stripes. The vertebral and/or lateral stripes may be absent. Adults rarely exceed 23.6 inches total length. The pupil is round.

Coloration and patterns are highly variable. The dorsal (topside) color is brown, dark brown, slate gray or black. The vertebral stripe is white, yellow, orange, red, green, turquoise, or blue. The lateral stripes are white, yellow, green, turquoise, or blue. Small dark spots may be present between the vertebral stripe and the lateral stripes. White flecks are present on the edges of the dorsal scales. The ventral (underside) coloration is usually white or yellow at the chin with increasing bluish or black pigmentation toward the tail. Red-, orange- or salmon-colored blotches are usually present on the ventral surface of individuals with red vertebral stripes.

Desert striped whipsnakes may be confused with gartersnakes. They differ in being larger (adults greater than 3 feet in length), having smooth scales, 15 dorsal scale rows, and they have a distinct pattern of dark and light-colored stripes on the sides of the body.

Northwestern gartersnakes are the smallest and most terrestrial (land-based) of our three garter snake species. They occur in open grassy areas, in forest openings and edges of coniferous forest. They are also common near water bodies.

At low elevations, activity starts in March and continues into early November. After emergence from winter dens, snakes may remain in the vicinity of the overwintering site for two or more weeks until mating is complete and weather conditions are appropriate for dispersal.

Northwestern gartersnakes typically breed in spring after emergence in late March to early April, and again in late September and early October.

Northwestern gartersnakes give birth to their young rather than lay eggs. The young are born in late summer and early fall depending on location. In the lowland Puget Sound area, newborns (neonates) start to appear in late August and early September.

This species is a specialist on slugs and earthworms.

Northwestern gartersnakes occur primarily west of the Cascades Mountain crest in the Northwest Coast, Puget Trough and West Cascades ecoregions. Occurrences in the East Cascades Ecoregion are from the Cle Elum area in Kittitas County, northwestern Yakima County and western Klickitat County. The species may also cross into the Northern Cascade Ecoregion near Deming.

This map from the Washington Herp Atlas illustrates the distribution of northwestern gartersnake in Washington based on records in the WDFW database as of 2016. If you see this species in areas that are not indicated on the map or have more recent observations (less than 10 years), please share your observation using the WDFW wildlife reporting form.

The state conservation status of the northwestern gartersnake is “secure” based on the assumption that it is common according to the most current records.