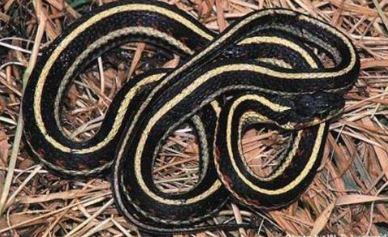 Common gartersnakes may have yellow, green, or blue stripes  (W.P. Leonard, Copyright)
Category: Reptiles
Family: Colubridae
Ecosystems: Riparian areas
If you see this species, please share your observation using the WDFW wildlife reporting form. Providing detailed information such as a photo and exact coordinates will improve the confidence and value of this observation to WDFW species conservation and management.

This is one of Washington’s most common snake species. No declines have been reported in the state but declines in amphibian populations could potentially result in declines of this species.

Reported declines in other states and Canadian provinces have been due to habitat loss and over-collecting for the pet and scientific trade.

According to NatureServe, the state conservation status of the common gartersnake population is considered “secure” in Washington. No declines have been reported in Washington.

The common gartersnake is a medium-sized dark snake with stripes. It has a dorsal pattern that is the most variable of any of the gartersnake species (Thamnophis species). Typically, three stripes are present; a thin dorsal (topside) stripe on the middle of the back and two thin lateral (side) stripes on the second and third dorsal scale rows. The lateral or dorsal stripes may be absent in some individuals. Adults can reach 54 inches total length but individuals in Washington are shorter. The pupil is round. The scales are keeled.

In eastern Washington, common gartersnakes are black bodied with bright yellow dorsal and lateral stripes. Distinct red blotches are present on the sides of the body just above the lateral stripes. A red cheek blotch is usually present. The ventral coloration is yellow or buff. Individuals, in some areas, may have blue or turquoise lateral stripes instead of yellow and these snakes usually have blue ventral scales.

Desert striped whipsnakes may be confused with gartersnakes. They differ in having smooth scales, 15 dorsal scale rows, and a mid-dorsal area that is dark brown or black with multiple white or yellow stripes on the sides of the body.

In western Washington, red blotches may or may not be present on the common gartersnake and the stripe coloration is much more variable.

Ground color is slate gray or black, sometimes with a bluish tinge. Stripe colors are yellow, green, turquoise or blue. All stripes may be the same color, or the lateral stripes may differ from the dorsal stripe in color. The ventral (underside) coloration is usually yellow or cream under the chin with increasing black pigmentation toward the tail. Snakes with blue lateral stripes usually have blue ventral coloration.

Snakes without red blotches have white patches of skin between the scales on the sides of the body. This trait will not be obvious in most snakes without gently stretching the skin to separate the scales above the lateral stripes. This trait is usually more prominent near the head. Other variations include orange blotches instead of red; blotches only on the anterior portions of the snake; or red blotches that are hidden under dark scales. In very melanistic (dark pigmented) individuals, all the skin between the scales is black and no white or red blotches are present.

In Washington, common gartesnakes are almost always found near water. Typical aquatic habitats include wetlands, bogs, ponds, lakes, springs, creeks, and rivers. They are good swimmers and can hunt both on and below the water surface. Juvenile common gartersnakes have been observed hunting newly metamorphosing pacific treefrogs in shallow, seasonal, water bodies.

Typical terrestrial habitats include sunny areas near water such as meadows, oak patches, forest openings, and shrubby areas. In the spring and fall snakes may be found away from water as they move to and from terrestrial overwintering sites.

Common gartersnakes are one of the few vertebrates that can successfully prey on the extremely toxic rough-skinned newt. Research indicates that these snakes harbor significant amounts of active toxin in their tissues after consuming a newt. The amount of toxin in the liver varies depending on the number of newts eaten, but the amount in many cases is enough to severely incapacitate or kill avian predators and negatively affect mammalian predators.

The species breeds in spring after emergence. Males emerge before females and spend time on the surface near the overwintering sites. When a female emerges, the males will attempt to mate with her forming “mating balls” of many males around one female.

After mating, snakes disperse to summer foraging areas. In the lower Puget Sound area, female gartersnakes of all three species are commonly found clustered in open grassy areas. This behavior may be related to thermoregulation and gestation.

The young are born in late summer and early fall depending on location. In the lowland Puget Sound area, neonates start to appear in late August and early September.

The common gartersnake has the greatest geographical distribution of any gartersnake, occurring in all Washington Ecoregions. Occurrences are patchy in the central Columbia Basin.

This map from the Washington Herp Atlas illustrates the distribution of common gartersnake in Washington based on records in the WDFW database as of 2016. If you see this species in areas that are not indicated on the map or have more recent observations (less than 10 years), please share your observation using the WDFW wildlife reporting form.

For a map of range-wide distribution and conservation status of this species, check out NatureServe Explorer and the International Union for Conservation of Nature Redlist

The state conservation status of the common gartersnake is “secure” based on the assumption that it is common according to the most current records.