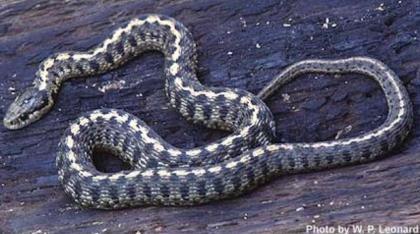 Dark spots overlap with the stripe on the back of terrestrial gartersnakes  (W.P. Leonard, Copyright)
Category: Reptiles
Family: Colubridae
Ecosystems: Riparian areas
If you see this species, please share your observation using the WDFW wildlife reporting form. Providing detailed information such as a photo and exact coordinates will improve the confidence and value of this observation to WDFW species conservation and management.

This is a wide ranging and common snake species associated with water. No declines have been reported in Washington at this time.

According to NatureServe, the state conservation status of the terrestrial gartersnake population is considered “secure” in Washington.

This is a medium-sized gray to brown snake with stripes and small spots. Typically, three stripes are present: a thin vertebral (back) stripe and two thin lateral (sides) stripes. The stripes are yellow or cream colored. The lateral stripes are on the second and third scale rows. The small dark spots occur in two alternating rows between the vertebral stripe and lateral stripes. The upper spots invade the vertebral stripe. The belly is gray with black pigment concentrated along the mid-belly. The subspecies (T.e. vagrans) that occurs in Washington grows to 38 inches total length.

Variation: The mid-dorsal stripe may be indistinct, absent, or incomplete in some individuals. The lateral stripes may be indistinct. Some individuals appear more spotted than striped. Melanistic (dark pigmented) forms have been observed in Washington. Coloration of this species in the Columbia Basin tends to be rather dull in comparison with populations in western Washington

Desert striped whipsnakes may be confused with gartersnakes. They differ in being larger (adults greater than 3 feet in length), having smooth scales, 15 dorsal scale rows, and they have a distinct pattern of dark and light-colored stripes on the sides of the body.

Contrary to their name, terrestrial gartersnakes are almost always found near water in Washington. This is especially true in the Columbia Basin where populations are restricted to aquatic areas due to the xeric conditions of the uplands. These snakes have been observed along ponds, wetlands, lakes, stream edges, irrigation canals and rivers. Typically, they are found in grassy or shrubby areas on the edges of water bodies or in meadows and other openings nearby.

Terrestrial gartesnakes have toxic salivary secretions that may help immobilize prey. People have reported localized swelling from bites. These reports are infrequent, and the toxins are not thought to be a serious problem for humans.

At low elevations, activity starts in March and continues into early November. Snakes may remain in the vicinity of the overwintering site for two or more weeks until mating is complete and weather conditions are appropriate for dispersal.

Breeding takes place in spring after emergence in late March to early April. Fall courtship activities have been observed in early September in British Columbia. After mating, snakes disperse to summer foraging areas. Migrations of up to 1.9 miles have been documented. Once snakes reach their foraging areas, movement distances decline again.

In the lower Puget Sound area, female garter snakes of all three species are commonly found clustered in open grassy areas near water bodies. Aggregations of as many as 20 individual gravid female terrestrial gartersnakes have been observed in other parts of the range.

Terrestrial gartersnakes give birth to their young rather than lay eggs; the young are born in late summer and early fall depending on location. In the lowland Puget Sound area, newborns start to appear in late August and early September.

Starting in September, the snakes migrate back to their overwintering locations.

Terrestrial gartersnakes have been documented in all Washington ecoregions. Occurrences in the Northwest Coast, West Cascades and North Cascades ecoregions are uncommon.

Only one occurrence has been documented in the North Cascades Ecoregion. Collected in 1920, this specimen is in the U.S. National Museum collection. Because of the convoluted taxonomic history of T. elegans, this specimen should be examined to verify that is not the northwestern gartersnake (T. ordinoides).

This map from the Washington Herp Atlas illustrates the distribution of terrestrial gartersnake in Washington based on records in the WDFW database as of 2016. If you see this species in areas that are not indicated on the map or have more recent observations (less than 10 years), please share your observation using the WDFW wildlife reporting form.

The state conservation status of the terrestrial gartersnake is “secure” based on the assumption that it is common according to the most current records.