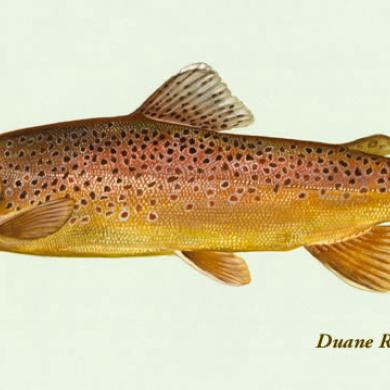 Brown trout are a popular and widely distributed game fish in Washington.   The Salmo genus name indicates they are not closely related to our native trout and salmon but rather are most closely related to Atlantic salmon, and like Atlantic salmon, they are of European origin.  The single most outstanding distinguishing feature of brown trout are their dark spots on the sides of their body that are surrounded by light halos.Average 12-18 inches. Brown trout can grow to 20+ inches (and several pounds) in quality populations.

Brown trout are a popular game fish because they are considered to be one of the more challenging trout to catch on hook and line, they can grow to a large size and they are a beautiful fish. They are prized by all anglers but particularly fly anglers.

A brown trout's natural forage includes a variety of insects and larvae, as well as terrestrial invertebrates when available but when they get bigger, they prefer a fish diet. They will readily take worms and other bait, such as Powerbait. Spin casting from the shore or a boat can be effective as well as well as trolling. Spoons and rapalas work well because they mimic forage fish for the larger browns.

Brown trout have a higher tolerance for warmer water and lower oxygen levels than other trout so they can be caught when water temperatures begin to rise but 60 degrees is optimal. When the water temperature is rising in warmer months, it becomes more important to fish for browns early in the morning or at dusk. In the spring and fall, browns are actually more actively feeding toward the middle of the day and when the water is colder, they can be found closer to the surface and the shoreline.

Remember, when handling any fish you intend to release, wet your hands first so you don't take off the fish's protective slippery coating. Dry hands will remove the protective coating and make the fish vulnerable to bacterial or fungal infections, which can kill them.