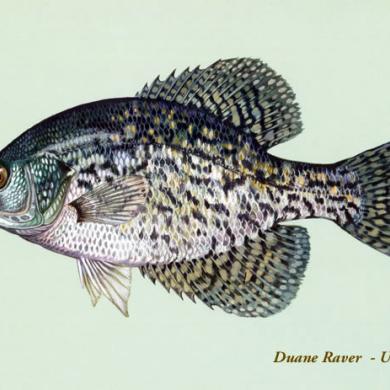 Black crappie are one of several "panfish" species in Washington and are very popular with anglers, because they are relatively easy to catch and are considered excellent eating. Crappie can be identified by their large rounded dorsal and anal fins, and their deep, but narrow bodies, giving a compressed "pancake" appearance. Black crappie are closely related to white crappie and are the more plentiful of the two species in Washington. They have seven or eight dorsal spines and dark, irregularly-spaced blotches covering their sides. White crappies have five or six dorsal spines, and are usually shaded with dark vertical bars and the base of their dorsal fin is shorter than that of the black crappie.  White crappie do not have the number of spots on their sides that black crappie do.Average 7-9 inches. Crappie can grow to 9-15 inches in quality populations.

Fishing improves throughout the Spring, peaking during the spawn. Summer is a slight lull, while Fall sees an improvement as waters cool, vegetation dies back, and prey becomes more available. During winter, the bite is slower, but anglers can have great success fishing through the ice when conditions are safe.

Crappie can be a dependable year-round opportunity. They are the earliest spawners of the sunfish family, actively spawning when water temperatures approach 55° F. Unlike bass, these fish are commonly found in schools during the spring. They tend to scatter after spawning, and are more likely to be found in deeper water during the summer. Black crappies seem to be more dependent on vegetation, while white crappies do better in more turbid waters. Both species are often found congregated around underwater structure, such as old pilings, stumps, snags, or near rocks or the mouths of feeder streams.   Fishing at night can also be productive where permitted.

They will take nearly every kind of lure, from garden hackle to small bass plugs, but small plastic tube jigs and curly-tailed grubs are the most popular and consistent producers. Fly fishing for warmwater fish is growing in popularity and can be very productive for panfish such as crappie, as well as largemouth and smallmouth bass.   When the water is cool (below 55° F), try tipping the lure with a bit of bait. Small bass bugs and high-riding hair bugs on a fly rod work well in the spring after the water has warmed. Other good artificial lures include wet flies and streamers, plus spinners, small spoons, and small poppers.

Crappies will not normally strike a fast-moving target, so moving the lure slowly is a key to success. In shallow water, an effective retrieve can be achieved by hanging a tube jig or curly-tailed below a bobber, then adjusting the depth to match that of the fish. Move the bobber very slowly, then strike gently (merely lifting the rod is usually enough) when the bobber moves sideways or dips. A gentle hook-set is necessary because of the crappies' very thin mouth. For the best landing success, play the fish carefully and use a landing net.