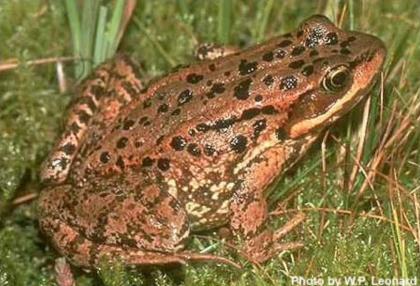 Adult Cascades frog located in Pierce County. (W.P. Leonard, Copyright)
Category: Amphibians
Family: Ranidae
If you see this species, please share your observation using the WDFW wildlife reporting form. Providing detailed information such as a photo and exact coordinates will improve the confidence and value of this observation to WDFW species conservation and management.

This is a common frog that remains widespread throughout its historical habitat in Washington.

According to NatureServe, the state conservation status of the Cascade frog population is nevertheless considered “vulnerable” in Washington.

This is a medium-sized frog with a slender body, relatively smooth skin, two distinct parallel ridges of skin (dorsolateral folds) on the dorsal (top) sides of the body, and an eye mask. Adults grow to about 3 inches snout to vent length. The dorsal color is tan, brown or olive-brown with inky black spots with distinct margins. The undersides of the legs and margin of the abdomen are honey yellow. Black and cream to greenish-yellow mottling is present on the sides of the body at the juncture between body and legs (the groin). Mature males have gray swollen pads, called nuptial pads, on the thumbs.

Cascades frogs are distinguished by the honey-yellow coloration on the abdomen and undersides of the legs and the following traits: 1) the groin has weak mottling of black and greenish yellow or cream where dorsal coloration meets ventral coloration but it is unlike the distinct patch of multiple colors seen in northern red-legged frogs, 2) the dorsal spots are inky black with distinct edges that are neither ragged or blurred, 3) dorsolateral folds are present along the entire dorsal margins, 4) the eyes are oriented outward (laterally) so that only a portion of the pupil is visible when the frog is viewed from above, and 5) webbing is reduced between the toes so that the webbing on the longest toe does not extend past the first joint and the webbing is concave when the toes are pulled apart.

Some Cascades frogs have a small amount of red pigmentation on the underside of the body but not to the extent seen in the northern red-legged frog, Oregon spotted frog and Columbia spotted frogs.

The American bullfrog and American green frog, introduced True Frogs and invasive species in Washington, have a distinct fold (supratympanic fold) from the posterior edge of the eye, around the top of the external ear (tympanum) and ending at the shoulder; and typically exhibit green coloration on the face.

The tadpole has an oval body with dorsal eyes. The dorsal fin terminates posterior to the tube for moving respiratory water out of the body (spiracle) and is relatively low. The tail tip is pointed. At hatching, the tadpoles are dark brown but appear black in most light. As they grow, they develop metallic pigmentation that is silvery or brassy. Tadpoles grow to between 2 to 3 inches total lengths before metamorphosis.

In comparison, Pacific treefrog tadpoles differ in having eyes along the outline of the head when viewed from above. Western toad tadpoles are black dorsally and ventrally, have minimal if any metallic flecking, have flattened bodies, have a tail fin that does not extend onto the back and have narrowly placed dorsal eyes on top of the head.

Large American bullfrog and American green frog tadpoles have distinct black spots over the body on a khaki-colored dorsal ground color and the abdomen is an opaque yellow (intestines not visible) with no metallic pigment (bullfrog) or coppery sheen (green frog).

The tadpoles of the northern red-legged frog, Oregon and Columbia spotted frogs, and Cascades frog are similar enough that distinguishing them is challenging.

Although there are some subtle differences, one cannot reliably distinguish the egg masses of the Cascades frog, Oregon spotted frog and Columbia spotted frog. Range differences, and to some extent elevation, can be used in some areas to determine the more likely species. All three species typically lay their eggs in communal clusters that consist of many (up to 60 or more) egg masses laid next to or on top of each other in shallow (less than or equal to 6 inches) water. At some sites in Oregon, Cascades frogs and Oregon spotted frogs will even lay eggs in the same communal clusters.

The northwestern salamander has a fist-sized globular egg mass that is solid to the touch, always attached to vegetation and the animal pole of the egg (ovum) and the embryos are brown not dark brown or black.

The advertisement call is a series of weak, slow, low croaks or chuckles. One must be in close vicinity to the breeding site to hear the males. Males call during the day. Intensity increases on sunny days.

Cascades frogs are found primarily at higher elevations (most above 2000 feet in Washington) with suitable breeding sites. It is not unusual to find them away from water bodies. However, most individuals are found in the vicinity of standing or flowing water. They can be active both day and night. Cascades frogs can be abundant at sites where they occur.

Breeding behavior starts as soon as ice has melted and waters at the oviposition sites have reached approximately 46 degrees Fahrenheit. This is typically between April and June. Breeding is explosive with all females laying eggs within a short period of time. Development time to hatching takes two to four weeks depending on temperature and sun exposure. The larval period is about two months long.

In Washington, Cascades frogs is a common species that occurs in the Pacific Coast, North Cascades, West Cascades and East Cascades ecoregions

This map from the Washington Herp Atlas illustrates the distribution of Cascades frog in Washington based on records in the WDFW database as of 2016. If you see this species in areas that are not indicated on the map or have more recent observations (less than 10 years), please share your observation using the WDFW wildlife reporting form.

The state conservation status of the Pacific treefrog is “vulnerable” based on the assumption that it is common according to the most current records.

Monitoring of populations is recommended due to general declines of True Frogs (ranid species). Annual egg mass surveys to determine number of breeding females (one egg mass per adult female) is the most efficient method for monitoring populations of this species for long-term trend analyses.

Results of surveys in Olympic National Park in the late 1990s found Cascades frogs to be among the most commonly encountered pond breeding species and no evidence of declines was reported. They have also re-colonized sites at Mount St. Helens. Declines have, however, been reported from Oregon and most severely from California.