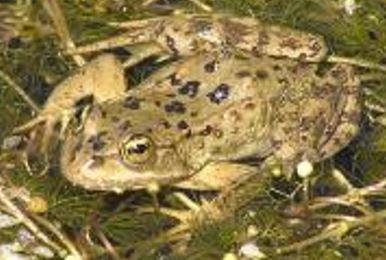 Populations of this species in the Columbia Basin are declining, likely due to habitat loss as well as alteration and other factors, such as fish stocking. This species is aquatic, so drying of ponds and creeks due to agricultural water withdrawals is a threat.

This is a medium sized frog that is mainly aquatic. Adults range from 1.5 to 4 inches in length from snout to vent. The eyes are oriented upward. They have two ridges that run down the back called dorsolateral folds. These tend to be absent or weak posterior to the sacral hump. The dorsal (topside) color is beige or olive brown to brick red with black spots with ragged edges and light centers. In Washington, the undersides of the legs and margin of the abdomen are typically orange to red. This coloration is absent in newly metamorphosed frogs and develops as the frogs grow. The legs are relatively short compared to other ranid frogs and toes are nearly fully webbed. Breeding males develop large forelimbs, and a dark "nuptial" pads on the base of their thumbs.

The True Frogs (Rana species) in Washington are closely related and similar in appearance. These include the Oregon spotted frog, northern red-legged frog, and Cascades frog. The Columbia spotted frog and Oregon spotted frog were the same species (“spotted frog”) until genetic analysis revealed they were two different species. While they have subtle color variations, they are morphologically indistinct. Therefore, geographic locality is used to determine species.

The following traits of the Columbia spotted frog distinguish it from the Cascades frog and northern red-legged frog: 1) the dorsal spots are black with ragged edges and light centers, 2) the eyes are oriented upward at about 45-degree angle with the entire pupil of both eyes visible when the frog is viewed directly from above, 3) there is nearly full webbing between the toes with the webbing of the hind foot reaching almost to the tip of the longest toe and the webbing is almost straight when the toes are stretched apart, 4) the coloration in the groin area is similar to the coloration anteriorly on the side and posteriorly on the thighs with no obvious yellow and black mottled patch or patches, 5) when the hind leg is pressed forward against the body, the heel of the hind foot will seldom reach the nostril (similarly, the knee to heel measurement is typically less than half of the snout-vent length), and 6) the dorsolateral folds are interrupted about two-thirds the distance down the back from the eye and often disappear entirely posteriorly. The above traits may be difficult to see or absent in small frogs.

The northern leopard frog (Lithobates pipiens) has well-defined oval and round leopard-like dark spots with pale borders, conspicuous dorsolateral folds that extend the entire length of the body, and the underside is white.

American bullfrogs (L. catesbeianus) and northern green frogs (L. clamitans), two non-native frogs, can be distinguished because they have a distinct fold of skin.

The tadpole (aquatic larval stage) has an oval body with dorsal eyes, a vent on the right side, a spiracle on the left side and a dorsal fin that originates on the body near the dorsal tail-body junction. The tip of the tail is pointed. At hatching, the tadpoles appear black, have long tails (greater than 1.5 times body length), obvious gills and remain associated with the egg mass for days. As the tadpoles grow, the ground color and belly lighten and silver flecks appear, eventually covering the gut. Tadpoles can grow to large sizes (4.3 inches total length) before metamorphosis.

American bullfrog and northern green frog tadpoles are also similar but larger tadpoles have distinct tiny black spots over a typically khaki-colored body and tail. The abdomen is opaque cream or creamy-yellow and lacks metallic pigmentation.

Columbia spotted frog have globular egg masses that are loose to the touch, grapefruit-sized and not attached to a vegetation brace. The eggs and embryos are darkly pigmented. The frogs lay their egg masses in shallow water usually 6 inches deep or less. The top of the egg mass is often exposed at the water surface. Egg masses are typically communally laid, resulting in clustered egg mass groups of two to more than 100. Single egg masses in the vicinity of multi-mass clusters are common.

The northwestern salamander has a grapefruit-sized globular egg mass, but its jelly is solid to the touch, always attached to vegetation or woody debris, and the eggs and larvae are brown not black. No other species that occur in the same range and habitat have large globular egg masses

The call is a series of six to nine low-pitched clucks similar to the sound made when the tongue is clicked against the roof of the mouth. One must typically be within 16 feet to hear this faint call.

This species is relatively aquatic and is rarely found far from water. It occupies a variety of still-water habitats and can also be found in streams and creeks. It is common to see these frogs basking on the shore or on floating debris.

Breeding habitat is the seasonally flooded margins and shallows of wetlands, ponds and lakes. Flooded pools and still water edges of creeks may also be used in some areas. Breeding in the Columbia Basin begins in late March to early April. In the Okanogan Highlands breeding starts in late April to early May at mid-elevation sites between 2,000 to 3,500 feet and late May to early June at elevation sites greater than 4,500 feet.

Egg masses are laid in shallow water where they receive little or no shading from vegetation. Typically the egg masses are deposited in communal clusters. Embryos take approximately three to five weeks to develop, depending on the temperature regime and elevation.

Metamorphosis typically occurs in late summer but may be delayed at higher elevation sites. They become sexually mature in two to six years, depending on location and elevation.

The species generally stays in wetlands along streams within 0.6 miles of their breeding pond, although movements of up to four miles have been recorded. Frogs in isolated ponds may not leave those sites.

Waters that remain aerobic and do not freeze to the sediments (such as springs and creeks) are most likely necessary for winter survival in areas subject to freezing.

In Washington, the Columbia spotted frog occurs east of the Cascade Mountain crest in the East Cascades, Okanogan, Canadian Rocky Mountains, Columbia Basin, and Blue Mountain Ecoregions, and spilling over the Cascade crest to the west slope in the north Cascades near Harts and Rainy Passes. Small, scattered populations occur in the shrubsteppe vegetation zones of the Columbia Basin.

This map from the Washington Herp Atlas illustrates the distribution of Columbia spotted frog in Washington based on records in the WDFW database as of 2016. If you see this species in areas that are not indicated on the map or have more recent observations (less than 10 years), please share your observation using the WDFW wildlife reporting form.

Though very limited information exists regarding the sensitivity of the Columbia spotted frog to climate change, their sensitivity is likely to stem from any climate-induced changes in their aquatic habitat, which they use for breeding, rearing, and non-breeding active-season activities and overwintering. Significant use of terrestrial habitat is for movements between aquatic habitat compartments. If aquatic habitats shrink, this could limit available breeding, rearing, non-breeding active season and overwintering habitat for this species, increase the distances life stages have to move between aquatic habitats, and concentrate predators in shrinking habitats. Moreover, seasonal drying pattern of the terrestrial movement habitat may limit the time periods favorable for movement. Movement may be particularly stressful for juveniles who are unable to travel long distances to more suitable habitat. Changes in precipitation patterns could also affect the Columbia spotted frog through alterations in breeding timing, egg survival, and availability of prey. However, predicted increases in temperature and milder winters may positively impact this species, as studies have shown that warmer and less severe winters are linked to increases in survival and breeding probability.