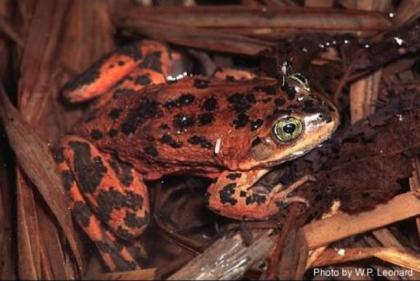 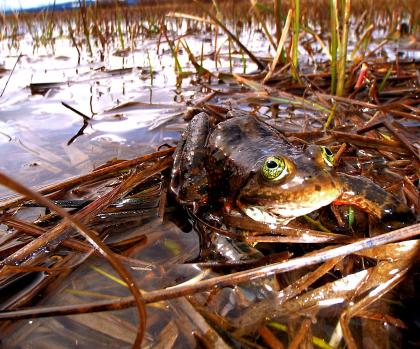 Photo submission: it is helpful to include photos of the topside, underside, and sideview with legs extended to show the groin, plus the frog’s face and hind foot webbing.

The Washington state status of this frog is based on the rarity of the species. Human-caused stressors include wetland loss and alteration, loss of disturbance processes that set back succession, introduction of non-native/invasive flora and fauna and alteration of creek and river channels.

Only six watersheds are currently known to be occupied in Washington. Within a watershed, most breeding populations are small and many are isolated from other breeding populations. They require breeding sites in shallow water with short vegetation and full sun exposure. This habitat type is rapidly lost to invasive grasses without management such as grazing, haying, mowing or restoration to native flora.

The Oregon spotted frog is a medium to large aquatic frog (adults are 2 to 4 inches in length from snout to vent). The dorsal color is olive brown to brick red, with black spots. See the Washington Herp Atlas for more details about this species, including description of tadpoles.

This species is highly aquatic and rarely found away from water.  Extant populations occur in large shallow wetland systems associated with a stream or stream network. Breeding habitat is in seasonally flooded margins of wetlands and areas of extensive shallows (approximately 6 to 8 inches deep).

Waters that remain aerobic and do not freeze to the sediments are necessary for winter survival in areas subject to freezing. Beaver impounded systems appear to provide many of the habitat requirements of this species. Radio-telemetry and mark-recapture studies have revealed that Oregon spotted frogs are relatively sedentary during the summer (driest period) and remain active underwater during the winter.

These frogs are communal breeders that return to the same breeding areas each year. They require breeding sites in shallow water with short vegetation and full sun exposure. Breeding occurs in February and March, and times can differ depending on location, elevation, and water temperatures. Egg masses are placed in areas where they receive little or no shading from vegetation. Embryos take approximately three weeks to develop to hatching. Tadpoles transform in mid-summer of their first year.

Oregon spotted frogs are preyed upon my many predators that live in wetlands, such as great blue herons and mink. Of particular concern are non-native predators such as American bullfrogs and warm-water game fish.

The historical range for Oregon spotted frogs in Washington is the Puget Trough Ecoregion, in Whatcom, Skagit, and Thurston counties, and the southern extent of the Eastern Cascades Ecoregion, in Skamania and Klickitat counties.

A map illustrating the known distribution of the northern leopard frog in Washington is in the Washington Herp Atlas. For maps of range-wide distribution and conservation status of this species, check out NatureServe Explorer and the International Union for Conservation of Nature Red List.

Very limited information is available regarding the sensitivity of the Oregon spotted frog to climate change. Its main sensitivity is likely to be due to changes in pond and wetland habitat. This species is a warmer water marsh specialist that prefers shallow water ponds and vegetated pools connected to permanent water for breeding and tadpole development. Potential warmer and drier conditions could lead to alterations in or disappearance of shallow ponds and changes in vegetation, which could impact breeding and tadpole survival. In particular, it is likely to seasonally concentrate predators to a greater extent, and if those predators are warmwater exotics, it will increase the likelihood of predation on Oregon spotted frog life stages. Additionally, warmer temperatures could lead to increases in invasive warm water predators that prey upon Oregon spotted frogs, like bullfrogs and some invasive fish species, thus leading to potential population declines. Warmer temperature will also increase the active season for bullfrogs, which will reduce the time bullfrogs require to reach large body sizes, a situation that currently limits them somewhat in most areas of the Pacific Northwest. Increase bullfrog body size is likely to put the entire size distribution of post-metamorphic Oregon spotted frogs at risk.

The WDFW partners with U.S. Fish and Wildlife Service and Washington Department of Natural Resources to protect the Oregon spotted frog in Washington. Watch this video to learn about various  conservation efforts aimed at saving this species. See biologists conduct frog egg mass counts to get an idea of the number of breeding adults at a location and to better understand habitat use. Learn why habitat restoration for this species is important not only on public lands but on private lands, too, with the cooperation of private landowners who actively manage their property to help preserve this rare frog.

If you are a landowner with property in Clark, Pierce, King, Klickitat, Skagit, Snohomish, Thurston or Whatcom County and want to help with frog recovery efforts, please contact us: (360) 902-2515 or email: wildthing@dfw.wa.gov, and ask about cooperative conservation programs that provide incentives to private landowners. Find more information in this downloadable brochure: Oregon Spotted Frogs Need Your Help.

Learn about living with frogs. Understanding wildlife is key to reducing human/wildlife conflicts. The Washington Department of Fish and Wildlife offers a wide range of information designed to minimize conflicts between humans and wildlife, as well as attracting beneficial wildlife and helping residents better understand the animals in their backyards.