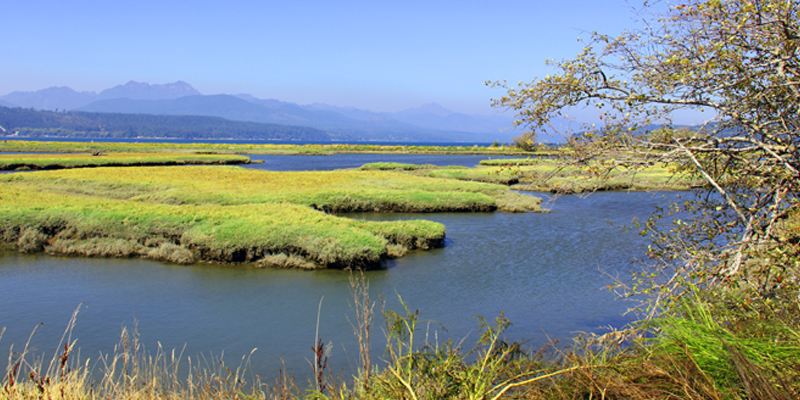 On the Hoko River, all steelhead must be released.

Marine areas 9 (Admiralty Inlet) re-opens for salmon fishing Jan. 1. Anglers fishing in Marine Area 9 can keep two salmon – only one of which may be a hatchery chinook – but must release coho and wild chinook. Unfortunately for anglers in Marine Area 10, the salmon season has ended, due to a low abundance of chum projected this year. Anglers fishing this area must release all chum in addition to wild Chinook and wild coho.

Salmon fishing continues in areas 11 (Tacoma-Vashon Island), 12 (Hood Canal) and 13 (South Puget Sound). Anglers fishing these areas have a daily limit of two salmon but must release wild chinook in all three areas as well as wild coho in area 13.

Salmon (freshwater): Some Willapa Bay tributaries are also open for salmon fishing this month. Those tributaries include the Willapa River, sections of the Naselle, as well as sections of the north, south and middle Nemah rivers. Anglers should be aware of emergency rules from September and October that reduced the number of adult salmon anglers can retain.

Razor clams: The new year gets underway with a five-day dig on various ocean beaches. State shellfish managers have approved the dig scheduled on the following dates, beaches and low tides:

The agency also announced a tentative opening for later this month pending the results of marine toxin tests. If the test results are favorable, the department will announce final approval for planned openings about a week before the dig is set to begin.

Those tentative dates include:

Diggers should keep an eye on WDFW’s razor clam season webpage for updates.

Under state law, diggers can take 15 razor clams per day and are required to keep the first 15 they dig. Each digger's clams must be kept in a separate container.

All diggers age 15 or older must have an applicable 2019-20 fishing license to harvest razor clams on any beach. Licenses, ranging from a three-day razor clam license to an annual combination fishing license, are available on WDFW's website at https://fishhunt.dfw.wa.gov and from license vendors around the state.

After the conclusion of the regular winter harvest season on Dec. 31, 2019, winter catch reports are due to WDFW by Feb. 4, 2020. For more information on catch record cards, visit WDFW's website.

Waterfowl: Hunters have through Jan. 26 to hunt ducks. Goose hunts in goose management area 3 (most of Region 6) also are open seven days a week through Jan. 26.  Pacific County and the portion of Grays Harbor County west of Highway 101 (Goose Management Area 2 – Coast) are open on Saturdays, Sundays, and Wednesdays only through Jan. 19, but re-opens on those same days Feb. 8-22. Goose Management Area 2 (Inland) – the section of Grays Harbor County east of Highway 101 — is open Saturdays, Sundays, and Wednesdays only through Jan. 12, opening again Feb. 8 – Mar. 7.

Some of the best waterfowl hunting in Thurston County is near the Nisqually Wildlife Refuge and near Henderson, Budd, and Eld inlets. The Centralia Mine in Lewis County and inlets of Pierce County also offer good waterfowl hunting opportunities. In Pacific and Grays Harbor counties, both geese and ducks tend to concentrate in the Willapa and Chehalis river valleys, although ducks also can be found near Willapa Bay and Grays Harbor.

Rabbit and hare: Hunting seasons for cottontail rabbit and snowshoe hare continue through March 15. Snowshoe hare are readily observed along forested roads in the western half of District 16 (Clallam and west Jefferson counties). The best opportunities for cottontail rabbit hunting in western Washington occur in District 11, where rabbits are abundant in the shrub and grasslands of Thurston and Pierce counties.

Report your hunting activity: As noted on page 6 of the Big Game Hunting pamphlet, Jan. 31 is the deadline for hunters to report their hunting activity for each special permit acquired and each deer, elk, bear, moose, bighorn sheep, mountain goat and turkey tag purchased in 2019. Those who do not meet the deadline must pay a $10 penalty before they can buy a license next year. Those who report by Jan. 10 will be entered into a drawing for incentive permits.

Washington Sportsmen’s Show: The 33rd annual Washington Sportsmen’s Show (Puyallup), which runs Jan. 22-26, will feature hundreds of products from the best brands, including Baxter’s Kid’s Trout Pond and the return of the Outdoor Cooking Competition and Kayak Fishing Pavilion. WDFW staff will have multiple booths at the show, so stop by to ask us questions or just to say hello. Visit the show’s website for event details.

First Day Hikes: Washington State Parks invites the public to start the new year off with a First Day Hike on Jan. 1 at 34 state parks, including Moran State Park in San Juan County, Dash Point State Park in Pierce, Hoko River State Park Property in Clallam to name a few. Jan. 1 is also the first of 12 “free days” – Jan. 20 is another – when visitors will not need to display the Discover Pass to gain access state parks.

WDFW partnered with Ducks Unlimited to add 1,100 acres of land to benefit wildlife and people near Westport

In close partnership with Ducks Unlimited, WDFW bought 1,100 acres of land near Westport in Grays Harbor County. We will manage the new property as an addition to the Elk River Unit of the Johns River Wildlife Area. A second phase to purchase an additional 600 acres is expected to be finalized by the end of the year.

The site will also provide additional recreation opportunities, including hiking, birding, and big-game and waterfowl hunting. Public access will initially be on a walk-in basis from the perimeter of the property, as plans to improve access are ongoing. Read the recent news release to learn more.

Larry Phillips has served as the South Puget Sound and Coast (Region 6) Director since 2016. Larry was first employed by the Department in 1996 as a Fisheries Technician collecting creel survey data on the Snake River. In 1998 he was hired as a permanent employee by the Fish Program in Spokane and later transferred to Olympia to serve as the Area Fish Biologist for South Puget Sound. In 2007 Larry was promoted to District Fish Biologist. He remained in this position until 2015 when he was promoted to Inland Fish Program Manager with state-wide responsibilities. In 2016 Larry promoted to his current position.