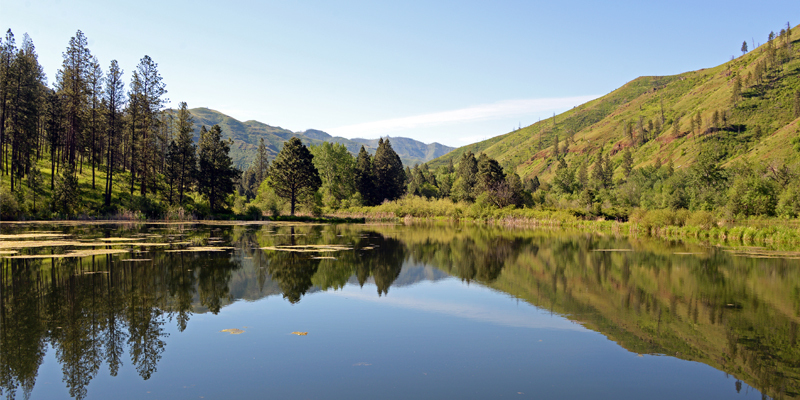 October can be a great time to fish many of the region’s trout lakes, rivers and streams. Some Spokane County trout lakes closed Sept. 30 (Fishtrap, Coffeepot, West Medical, Badger, Fish, and Downs lakes), but there are lots of other options in the fall months.
Clear Lake has rainbow and brown trout, bass, and other fish through October, while Amber Lake remains open through November and has rainbow and cutthroat trout. Keep in mind that Amber is under selective gear rules so no bait or barbed hooks are allowed. Medical Lake, another selective gear rule lake, is also open through November and has great opportunity for rainbow and brown trout.

Good fishing for bass and panfish continues at year-round lakes like Spokane County’s Silver and Newman lakes. Fall, and pretty much every other season, is a great time to fish Lake Spokane (Long Lake) for panfish, trout, and walleye.

Lake Roosevelt, the Columbia River reservoir off Grand Coulee Dam, has good action for big rainbows and walleye this time of year, especially in the northernmost reaches of the reservoir.

A reminder that seasonal fire restrictions are still in effect going into October on lands managed by WDFW. Weather and moisture conditions determine when restrictions will be lifted. Please Check WDFW’s fire information web page for updates before heading out on a fishing adventure where you plan to have a campfire. In addition to campfires, the restrictions also prohibit target shooting, chainsaw use, and driving vehicles off of established roads.

If you plan to hunt deer, elk or other species this fall, be sure to check this year’s rules in the 2022 Big Game Hunting pamphlet or the Migratory Waterfowl & Upland Game pamphlet before going hunting. WDFW’s Hunting Prospects guide and past Game Harvest Reports can be helpful in determining where to hunt. The hunting regulations web map for the 2022-23 hunting seasons is also a great resource for finding general season hunts based on location, date, and weapon choice.

Have your harvested elk or deer tested for CWD

The general season for modern firearm hunting for both white-tailed and mule deer begins Oct. 15. The region’s best white-tailed deer hunting is in District 1, in Ferry, Stevens, and Pend Oreille counties. White-tailed deer are the most abundant in that district while mule deer are usually harvested in GMUs 101 and 121.

In Spokane, Lincoln and Whitman counties, there is almost equal hunting opportunities for both white-tailed and mule deer, although most of it is on private property, where securing permission is key. The best white-tailed hunting is usually in GMUs 124 and 127. The best mule deer hunting is in GMUs 136, 139, and 142.

The southeast district, made up of Asotin, Garfield, Columbia and Walla Walla counties, is best known for mule deer. GMUs with the highest success rates-145, 149, 178, and 181- also have the most private land so access can be limited. GMUs 166 and 175 have the most public land but also the lowest success rates, in part due to high hunter numbers.

If you hunt in WDFW’s Region 1- consisting of Asotin, Columbia, Ferry, Garfield, Lincoln, Pend Oreille, Spokane, Stevens, Walla Walla, and Whitman counties and Washington GMU’s 105, 108, 111, 113, 117, 124, 127- please have your harvested deer (or elk this year) tested for chronic wasting disease (CWD) at one of our check stations or other testing locations. CWD is a fatal neurologic disease of deer, elk, and moose. It is caused by an infectious prion protein transmitted directly from animal to animal or indirectly through contaminated environments. CWD has not been detected in Washington to date but has been in 26 states- the closest being Idaho- and four Canadian Provinces.

The modern firearm general season for elk starts in late October in eastern Washington. The best opportunities are in the southeast district of the Blue Mountains where there have traditionally been more elk overall and milder winter weather. GMU 166 has had the highest success rate for general season hunters in recent years, but also one of the higher densities of hunters because it is made up mostly of public lands.

The best elk hunting in northeast Washington is in the Pend Oreille sub-herd area, which includes GMUs 113, 117, and 111.

New this year, WDFW will be testing elk harvested in Region 1 for chronic wasting disease. You can have your elk tested at one of our check stations or other testing locations. CWD is a fatal neurologic disease of deer, elk, and moose. It is caused by an infectious prion protein transmitted directly from animal to animal or indirectly through contaminated environments. CWD has not been detected in Washington to date but has been in 26 states- the closest being Idaho- and four Canadian Provinces.

While grizzly bears are rare in Washington, a small population exists in northeast Washington, and their presence has also been documented in the Okanogan Highlands and the North Cascades. Hunters in these areas are also strongly encouraged to carry bear spray while hunting.

Moose hunting starts in October and takes place in the region’s northeast district, all by special permits that were drawn from last spring’s applicants.

When you harvest a bighorn sheep, bobcat, mountain goat, or river otters, you must schedule an inspection for pinning or sealing through the Region 1 WDFW office by calling 509-892-1000.

Hunting begins Oct. 1 for both chukar and gray (Hungarian) partridge. These birds are mostly found along the Snake River and throughout the grasslands of Asotin County.

The general season for pheasant hunting starts Oct. 22 in eastern Washington, with most of the action in Whitman County and south of the Snake River. In addition to wild birds, pheasant hunting opportunities are enhanced with releases of farm-raised roosters at sites across the region. Details can be found at on the Eastern Washington Pheasant Enhancement Program web page.

Duck and goose hunting opens in mid-October, but the best hunting in the region doesn’t kick in until late October or November. Mallards and Canada geese are most often harvested but wood ducks that nest in the Pend Oreille, Colville, and Kettle river valleys are good for early season hunting. Canada geese are abundant throughout the season in the Pend Oreille, Colville, Kettle, Columbia, Spokane, and Snake river valleys, especially in the bottom areas where there is extensive farmland.

If you haven’t completed your hunter education class, now is the time to do so with fall and winter hunting seasons coming up. There are options for full in-person and hybrid courses. All hunters must pass a hunter education safety course before hunting on their own. Washington honors all 50 states hunter education certifications. Hunter’s Ed reinforces important firearm and hunting safety principles, hunting ethics, basic survival and first aid, wildlife identification and conservation.

A reminder that seasonal fire restrictions are still in effect going into October on lands managed by WDFW. Weather and moisture conditions determine when restrictions will be lifted. Please Check WDFW’s fire information web page for updates before heading out to hunt and planning to have a campfire. In addition to campfires, the restrictions also prohibit target shooting, chainsaw use, and driving vehicles off of established roads.

If you watch birds, hike, camp or do other recreational activities, be aware that a number of hunting seasons are underway throughout the region. While the majority of hunters follow safety rules and carefully verify their targets, non-hunters can help to avoid accidents by wearing hunter’s orange clothing and making their presence known to hunters.

A reminder that seasonal fire restrictions are still in effect going into October on lands managed by WDFW. Weather and moisture conditions determine when restrictions will be lifted. Please Check WDFW’s fire information web page for updates before heading out on an adventure and planning to have a campfire. In addition to campfires, the restrictions also prohibit target shooting, chainsaw use, and driving vehicles off of established roads.

While we often associate October and Halloween with bats, September to November is when our 15 Washington bat species are preparing for winter. Hoary bats are heading south where many will winter in California and Mexico. Some year-round resident species, like little brown bats will move to higher elevation or seek out cool, safe places nearby to hibernate. Silver-haired bats and California Myotis are two species that remain active in Washington year-round.

We lack information about winter hibernating bats in Washington because they tend to hibernate alone or in small groups, and research has been limited. It is important to not disturb bats while hibernating, so if you encounter any please quietly and quickly leave and report it to WDFW. You can help us learn more by using the WDFW bat colony reporting tool if you find a winter hibernating roost (known as a hibernaculum).

Did you find bats in your building structures this summer? While bats are not rodents and do not gnaw or destroy infrastructure, they have messy guano (feces) and for some, having bats living outside buildings is better. Late autumn is the perfect time to exclude bats safety and humanely from your structures. Review these instructions on how to check that they are gone, create one-way doors, and seal up holes.

White-nose syndrome, a fungus that only affects hibernating bats, is dangerous for local bats during this time. Reports estimate the disease has killed between 5 to 7 million bats, such as little brown bats in Eastern North American since it was first discovered in 2006. The disease was first confirmed in Washington in 2016.

There are two important steps you can take to help local bats thrive:

Informative blog posts, recreational opportunities in your area, links to state and federal lands to explore, and more. Find them on our Life Outdoors page.

You can also win outdoor gear for sharing your outdoor adventures! Send us your best #LifeOutdoorsWA photos of how you spend time outdoors! Your photos may be featured on WDFW’s Facebook and Instagram to celebrate the variety of ways people enjoy outdoor lifestyles and to inspire others to spend time in nature.

Enter our monthly photo contest for a chance to win a Cabela’s gift card! Each month has a new theme and a new winner.

On the last Friday of the month, a winner will be selected and featured on WDFW’s Facebook and Instagram. Winners will also be contacted via email to receive their prize.

When sharing your photos on social media, be sure to use #LifeOutdoorsWA!

With school back in swing, now is the perfect time to check out our new 3rd grade lesson bundle, “State of Salmon.” This Next Generation Science Standards encourage students to put on their scientist, engineer, and social scientist caps while they explore salmonid species and discover how WDFW raises healthy salmon in hatcheries. This lesson bundle pairs excellent new and existing Salmon in the Classroom programs. Check it out today!

Steve Pozzanghera is the Eastern Region (Region 1) Regional Director for the Washington Department of Fish and Wildlife. Prior to taking the Regional director position in Spokane, Steve served as the Department’s first Carnivore Section Manager working in the Wildlife Program in Olympia. He then became the Deputy Assistant Director of the Wildlife Program before making the move to Region 1.