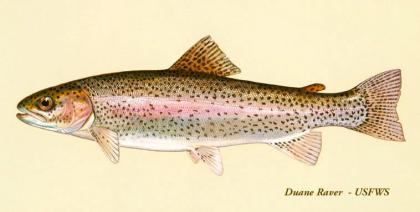 Steelhead and rainbow trout are the same species, but rainbow are freshwater only, and steelhead are anadromous, or go to sea. Unlike most salmon, steelhead can survive spawning, and can spawn in multiple years.

Rainbow trout are the most common and hence most popular species of trout in Washington. There are thousands of wild populations statewide but the main reason for their popularity is that the Washington Department of Fish and Wildlife stocks millions of rainbow trout every year across the state for the specific purpose of providing recreational angling opportunities. Rainbow trout are an excellent game fish for their willingness to bite bait and lures, their scrappy nature when on the end of a fishing line, and the fact that they are excellent table fare. Steelhead are also highly regarded game fish and the steelhead is the state fish of Washington.

Rainbow trout can be identified by their bluish-green back, silver sides and belly, and black spots on the body and on the caudal, dorsal, and adipose fins. Another characteristic of rainbow trout, which gives the fish its name, is the frequent presence of a reddish stripe along its sides. Rainbow trout average 11-18 inches in length, but can grow to more than 20 inches in quality populations.

Generally people think of rainbow trout as only inhabiting cold clear rivers, streams and lakes but both of the subspecies can be anadromous (seagoing). Anadromous rainbow trout are commonly known as steelhead. Steelhead can weigh 40 pounds or more, but average between 8 and 11 pounds. Steelhead also have dark spots scattered over the entire fish, including the tail, with slight to pronounced rainbow coloring.

Like chinook salmon, steelhead have two runs, a summer run and a winter run. Most summer runs are east of the Cascades, and enter streams in summer to reach the spawning grounds by the following spring. A few western Washington rivers also have established runs of summer steelhead. Winter runs spawn closer to the ocean, and require less travel time. They generally prefer fast water in small-to-large mainstem rivers, and medium-to-large tributaries.

Washington anglers must have an annual freshwater or combination fishing license. Licenses can be purchased online; by telephone at 1-866-246-9453; or at hundreds of license dealers across the state.

Information on fishing regulations and seasons is available in the sportfishing rule pamphlet and the Fish Washington app, which conveys up-to-the-minute fishing rules for every lake, river, stream and marine area in the state.

Rainbow trout can be caught in lakes and streams in every county in Washington.

Stocking reports
Details on when and where trout are stocked in Washington lakes is available in the annual stocking plan and the weekly trout stocking reports.

Fishing success for Rainbow Trout is generally best in the spring when thousands of fish are stocked statewide, but they can be caught year-round in most waters with a little patience and persistence. Success remains high into June and gradually declines as water temperatures increase and fish move offshore to stay cool. Fish that escaped the spring harvest return to the nearshore areas in the fall as waters cool off. Some waters may also be stocked again in the fall further boosting catch rates.

For more trout fishing tips, check out our April 2022 blog post: Beginners guide to trout fishing — helpful tips for a successful day on the water

Rainbow trout prefer to eat small aquatic and terrestrial insects, but larger adults will also prey on other fishes.   Part of their popularity as a game fish is because they are so willing to take a variety of baits, both natural and artificial, including but not limited to: corn, salmon eggs, dough, cheese, night crawlers and powerbait.   Artificial lures such as spinners, spoons, jigs, flies, wedding rings and plugs are also very effective.   When fishing lakes during the spring and fall, the water is cooler and the rainbow trout will often be found near the surface and also more active.   Trolling with spinners, flies, and spoons is a common tactic as well as suspending bait from the surface.   When the water warms during the summer months, the rainbow trout become a little more sluggish and seek deeper, cooler water, so fishing will need to occur at or near the bottom.   To catch the bottom dwellers you will want to fish with bait slightly suspended off the bottom, or troll with your lure near the bottom as well.

Remember, when handling any fish you intend to release, wet your hands first so you don't take off the fish's protective slippery coating.   Dry hands will remove the protective coating and make the fish vulnerable to bacterial or fungal infections, which can kill them.