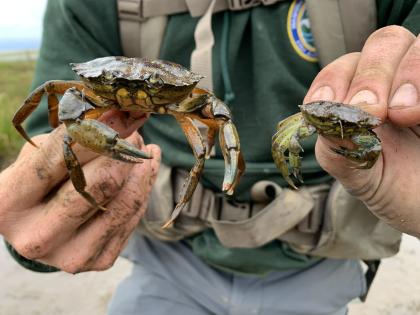 If you find a suspected European green crab or its shell in Washington, report it as soon as possible using the form on this webpage. Download the Crab Identification Guide and take pictures to confirm identification. At this time, we are not asking the public to kill suspected green crabs. This may sound counterintuitive but is intended to protect native crabs from cases of mistaken identity. As a Prohibited species, it is illegal to possess a live European green crab in Washington.

This webpage includes detailed information and resources for invasive species practitioners and other partners. For information for the public on identifying and reporting European green crabs, please visit this page.

European green crabs pose a threat to Washington's native shellfish, which are important for recreational and commercial harvest as well as to the shellfish aquaculture industry, and native estuary ecosystems.

In areas where green crab have been able to establish reproducing populations, they have had dramatic impacts on other species, particularly smaller shore crab, clams, and small oysters. While green crab cannot crack the shell of a mature oyster, they can prey upon young oysters, and will dig down six inches to find clams to eat. One green crab can consume 40 half-inch clams a day, as well as other crabs its own size.

The video below details an ecological catastrophe in the making due to European green crabs on the Massachusetts coast. As native scallops, mussels, clams, and protective eelgrass disappear under the explosive invasion of green crabs, scientists, local experts, and residents are scrambling to save the marsh from decimation.

In Washington state, the European green crab is most often confused with the native hairy shore crab or helmet crab. The most distinctive feature is not its color – which can vary from reddish to a dark mottled green – but the five spines or teeth on each side of the shell. There are three rounded lobes between the eyes; and the last pair of legs are somewhat flattened. The carapace is broader than it is long and seldom exceeds 3.5 to 4 inches across.

Download a crab identification guide from Washington Sea Grant or learn more about green crab ecology in this handout.

European green crab were discovered on the Washington coast in 1998 in Willapa Bay and Grays Harbor, and later in Makah Bay. European green crabs were first documented in the Salish Sea at Sooke Basin, British Columbia in 2012, and in the San Juan Islands in 2016.

The European green crab first became established the United States in the mid 1800s, arriving by ship to the Cape Cod region. In the early 1900s they spread northwards, where they are believed to have contributed to the dramatic declines in the soft shell clam fishery as far north as Nova Scotia. In 1989, green crabs were first discovered on the West Coast in San Francisco Bay, California and made it into Oregon, Washington, and British Columbia coastal estuaries in the late 1990s helped by strong El Nino currents.

Though considered edible and fished commercially in parts of their native range, European green crabs aren’t any bigger than your fist and don't make the most appealing meal. Where eaten, they are used primarily for crab stock and soup.

At this time, we are not asking the public to kill suspected green crabs. This may sound counterintuitive but is intended to protect native crabs from cases of mistaken identity.

If you find a suspected European green crab or its shell in Washington, report it as soon as possible. You can also report sightings through the Washington Invasive Species Council app or Invasive Animal Reporting Form.

Download Washington Sea Grant's Crab Identification Guide and take several pictures from different angles to confirm identification. It’s also helpful to include a coin or other object to help show its size.

European green crab are classified as a Prohibited Level 1 Invasive Species in Washington, meaning they may not be possessed, introduced on or into a water body or property, or trafficked (transported, bought or sold), without department authorization, a permit, or as otherwise provided by rule. These regulations may change in the future, but for now they are the law.

In 2021, WDFW, tribal co-managers, and partners identified an exponential increase of invasive European green crabs (EGC) within the Lummi Nation’s Sea Pond and outer coast areas, including Makah Bay, Grays Harbor, and Willapa Bay. This poses an imminent threat to Washington’s economic, environmental, and cultural resources. The $2.3 million appropriated by the State Legislature for EGC management in the 2021-23 biennium is not sufficient to control these exploding populations.

On Dec. 14, 2021, Director Susewind submitted an emergency measures request for invasive green crab response to Governor Jay Inslee. While emergency funding was not immediately available, on Jan. 19, 2022, Gov. Inslee issued an emergency order to address the exponential increase in the European green crab population within the Lummi Nation’s Sea Pond and outer coast areas. The proclamation directs WDFW to begin implementation of emergency measures and urges the Legislature to provide additional emergency funding as requested by the WDFW as soon as possible.

Working with the Governor’s office, the Office of Financial Management, tribal co-managers including the Lummi Nation, Makah Tribe, and others, and Washington Sea Grant, WDFW requested $8,568,00 million from the State Legislature during the 2022 supplemental session to control increasing European green crab populations. The Legislature fully-funded this request in the 2022 Supplemental Budget, which was signed by Governor Inslee on March 31.

With the emergency order and funding, WDFW has been working with tribes, other state and federal agencies, as well as shellfish growers and private tidelands owners to establish a coordinated response, hire and deploy personnel, and purchase and distribute equipment to areas with known green crab infestations. Three boats, nearly a dozen new employees, and more than 700 specialized traps have been deployed this spring, with more on the way.

Pursuant to Governor Inslee's Emergency Proclamation 22-02, Green Crab Infestation, the below reports are provided to meet the directive of RCW 77.135.090(4). The proclamation requires the Director of the Washington Department of Fish and Wildlife (WDFW) to continually evaluate the effects of the emergency measures and report these to the Governor.

The Washington Department of Fish and Wildlife (WDFW) has focused much of its efforts in the early detection of green crabs by monitoring locations that offer good habitat for the species. If the species is detected at a new location, WDFW conducts rapid response actions to reduce or eliminate those new populations, and to prevent the spread of European green crab from established locations.

Washington state prohibits the release of non-native species into Washington’s waters and the intentional import of live green crabs. To reduce risk of unintentional introductions, WDFW restricts movement of shellfish from green crab areas and requires that anyone seeking to move live shellfish into or around state waters be approved for an import or transfer permit, which may include precautionary treatment measures to further reduce risk.

Learn how a broad collaboration of volunteers, agencies, and tribes is working together to keep the crabs at bay in Washington State in this interactive story map.

To protect native crab species and prevent the spread of invasive species, it is currently illegal to possess or transport live European green crabs in Washington without department authorization, a permit, or as otherwise provided by rule. Permits and management support may be available for shellfish growers or private tideland owners encountering European green crabs.

WDFW has teamed up with the Washington Sea Grant “Crab Team” who is leading a volunteer-based early detection and monitoring program for green crab. The Crab Team is also working to improve the understanding of native salt marsh and pocket estuary organisms and how they could be affected by green crabs. To learn more about early detection, monitoring, and volunteer opportunities, please visit the Sea Grant’s Crab Team website.

Washington State prohibits the release of non-native species into Washington’s waters and the intentional import of live green crabs. To reduce risk of unintentional introductions, WDFW restricts movement of shellfish from green crab areas and requires that anyone seeking to move live shellfish into or around state waters be approved for an import or transfer permit, which may include precautionary treatment measures to further reduce risk.

As the prevention of green crab infestations requires widespread help, WDFW worked with the Canadian Department of Fisheries and Oceans, the Puget Sound Partnership, and Washington Sea Grant to develop the Salish Sea Transboundary Action Plan.

View our European Green Crab playlist on YouTube for all recordings.