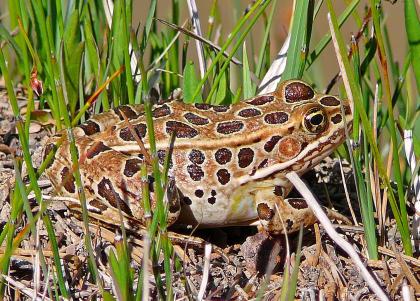 This is the only Washington frog with distinct roundish dark spots in 2 to 3 irregular rows between light-colored ridges along the back and sides.
Category: Amphibians
Ecosystems: Shrubsteppe ,  Riparian areas
State status: Endangered
Vulnerability to climate change (More details)

Only one native population remains in Washington. Efforts are underway to recover this species in central Grant County. WDFW is partnering with Washington State University, U.S. Fish and Wildlife Service, Oregon Zoo, and Northwest Trek to better understand population status and trends, to improve habitat conditions, and to reintroduce a northern leopard frog population to the Columbia National Wildlife Refuge.

The northern leopard frog is a medium to large (3 to 4 inches snout to vent length) aquatic frog with a slender body, thin waist, long legs, and smooth skin. The dorsal (topside) color is brown or green. The northern leopard frog is the only Washington frog with distinct round or oval dark spots arranged in two to three irregular rows between conspicuous light-colored dorsolateral folds (ridges along back and sides). The presence of these folds separates native Washington True Frogs (Rana species) from other Washington anurans. The northern leopard frog’s spots typically have a light border. Spotting also occurs on the limbs. The dorsolateral folds extent to the groin. The belly is cream or white with no dark markings

The tadpole (aquatic larval stage) has an oval body with dorsal eyes, a vent on the right side, a spiracle on the left side and a dorsal fin that originates on the body near the dorsal tail-body junction. The tip of the tail is pointed. The tail fin is translucent with or without fine dark markings. At hatching, tadpoles are uniformly dark. As they increase in size, they develop silver or gold pigmentation over the body and concentrated on the belly. The intestines are clearly visible through the abdominal muscles.

Tadpoles of the American bullfrog and Columbia spotted frog are similar and occupy the same range. American bullfrog tadpoles (less than 0.5 inches snout to vent length) have distinct black spots over the dorsal surface of the body. Other references should be consulted to accurately separate leopard frog and Columbia spotted frog tadpoles, but in general, leopard frog tadpoles (greater than 0.5 inches snout-vent length) differ in lacking dark mottling on the tail fin and having abdominal muscles that are nearly transparent.

The egg mass is 2.5 to 4 inches in width and attached to vegetation in shallow water. Smaller clusters of 20 to 40 eggs may be present near the main cluster. The ova are less than 0.9 inches in diameter. The gelatinous covering around the eggs is thin resulting in eggs that are packed closely together within the mass.

The Columbia spotted frog is the only amphibian within the Washington range of the leopard frog that also has grapefruit-sized globular egg masses. Leopard frogs do not have multi-clustered egg masses placed together in one pile, but rather they attach single egg masses to vegetation in water over 6 inches deep. Spotted frogs have a thicker jelly coat around the eggs and therefore the eggs do not appear tightly packed within the mass (except when the egg mass is first laid).

For more details about the northern leopard frog, see the Washington Herp Atlas.

Northern leopard frogs are semi-aquatic, requiring both aquatic and terrestrial habitats. Breeding occurs in shallow, still water sites. Typically these areas are exposed to sunlight and have thin but sturdy vegetation stems for egg attachment. In central Washington, breeding takes place in April. Males vocalize with a low snore followed by low grunts to attract females to breeding locations.

A grapefruit-sized egg mass is deposited just below the water surface and attached to vegetation. Eggs may hatch within a few days or weeks depending on water temperature. Tadpoles forage mainly on algae and detritus, and complete metamorphosis in 60 to 90 days. Newly metamorphosed frogs emerge from ponds starting in mid-July.

They typically overwinter under water, and require deep, well-oxygenated water that does not freeze solid to the sediments.

Northern leopard frogs may be preyed on by many species throughout their life history, but the most common are likely mustelids, bullfrogs, and fish.

This map from the Washington Herp Atlas illustrates the known distribution of northern leopard frog in Washington as of 2016. If you see this species in areas that are not indicated on the map, please share your observation using the WDFW wildlife reporting form.

Limited information was available regarding the sensitivity of Washington’s northern leopard frogs to climate change. They may experience some sensitivity to potential increases in temperature, that could lead to earlier timing of mating and breeding. Their sensitivity would be increased by potential climate-induced changes in their pond habitat. Adults need deep water, seasonal ponds, and wetlands for breeding habitat. Potential warmer, drier conditions could lead to declines in available breeding habitat. After breeding, northern leopard frog  will often forage away from the water’s edge in damp-soil marsh edges and meadows. This habitat  is likely the most vulnerable to climate change because predictions are for more extreme summer drying. This might result in northern leopard frogs having to utilize aquatic habitat more frequently during this season. It is unclear how severe a stressor this change might be. One concern is that it might increase northern leopard frog exposure to bullfrog and fish predation particularly if the leopard frogs are forced to use reservoir habitat because other aquatic water bodies and edges have dried. Drier conditions could even lead to localized population extinctions if breeding ponds become too shallow or disappear completely.

Due to the significant reduction in range and abundance of leopard frogs in Washington, and the continued threats to the remaining occupied sites, leopard frog were classified as an endangered species in Washington in 1999. The law protects endangered species and prohibits them from being hunted, taken maliciously, harassed, or possessed. This is for all life stages including adults, juveniles, tadpoles, and eggs. Keeping this species as a pet in Washington is also prohibited because species native to the state cannot be kept in captivity. The only exceptions are for zoos, educational centers, rehabilitation facilities, and research facilities that receive permits from WDFW.

See the Climate vulnerability section for information about the threats posed by climate change to the northern leopard frog.

Learn about living with frogs. Understanding wildlife is key to reducing human/wildlife conflicts. The Washington Department of Fish and Wildlife offers a wide range of information designed to minimize conflicts between humans and wildlife, as well as attracting beneficial wildlife and helping residents better understand the animals in their backyards.